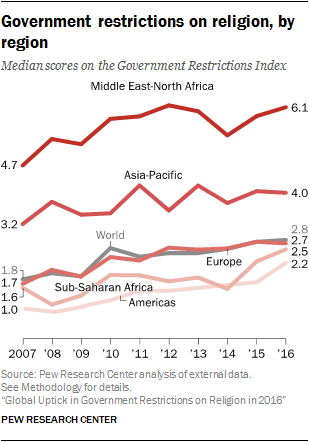 In 2016, the global median level of government restrictions on religion increased slightly to 2.8 from 2.7 in 2015. The median score rose in three out of five regions (the Americas, sub-Saharan Africa and the Middle East-North Africa region) and remained about the same in two regions (Asia-Pacific and Europe). While the Americas experienced the largest increase in its median score, it still had the lowest median score among all regions.

The Middle East and North Africa continued to have the highest median level of government restrictions, with the median score for the region’s 20 countries (6.1) more than double the global median (2.8). The region’s 0.2-point increase between 2015 and 2016 was due in part to more governments displaying hostility toward minority or non-approved religious groups (from 11 countries in 2015 to 15 in 2016) and failing to protect religious groups from discrimination and abuse (up from nine to 12).

Following an increase the year before, the median level of government restrictions for the 50 countries in the Asia-Pacific region remained roughly unchanged in 2016 (4.0).59 Still, an increasing number of countries experienced government harassment of religious groups in the region, whether on a limited or widespread basis. In Fiji, for example, an opposition parliament member was suspended for two years for questioning the leadership of Muslims who held high-level positions in the government, including the person who serves as the country’s attorney general and minister of finance.60

The median score for Europe’s 45 countries also remained roughly unchanged in 2016, staying at 2.7.61 Continuing the trend from the previous year, government harassment and intimidation of religious groups increased from 38 to 42 European countries in 2016. But in contrast with the previous year, the number of governments in Europe that used violence against minority religious groups declined from 10 countries to five. Similarly, government use of force against religious groups in general – whether in the form of property damage, detentions, displacements, assaults or killings – declined somewhat in 2016, from 24 to 21 countries.

France, however, stood out among European countries for having the most incidents of government use of force against religious groups. In particular, French authorities conducted nearly 4,000 warrantless raids and placed 400 people under house arrest – targeting mostly Muslims – during a period of emergency law from November 2015 to July 2016 in response to terrorist attacks in 2015. 62

Sub-Saharan Africa experienced a 0.3-point increase in its median government restrictions score. The slight increase was due in part to restrictions on the wearing of religious symbols and clothing for both women and men in six additional countries.63 In Uganda, for instance, Muslim staff at a public high school claimed the Christian head teacher did not allow female students to wear the hijab.64 Meanwhile, in Malawi, Rastafarian children were prohibited from attending public school due to a requirement that children to shave their heads in order to attend.65

The Americas experienced the largest increase (0.5 points) in its median score, although this was a small change; the Americas still had the lowest levels of government restrictions of any region.

Out of the 35 countries in the Americas, 26 saw increases in government restrictions scores in 2016. More governments interfered in worship, harassed religious groups (including minority or non-approved religious groups) and failed to protect some religious groups from discrimination or abuse. For example, in Ecuador, Honduras and Mexico, Jehovah’s Witnesses were at times prevented from building worship halls, proselytizing and distributing religious material.66 And in Cuba, large-scale detentions continued to increase. In February 2016, 200 members of the Emmanuel Church of the Apostolic Movement in the Santiago de Cuba region were detained, the church was destroyed and church property was confiscated. That same year, three other Apostolic Movement houses of worship were destroyed by the Cuban government.67 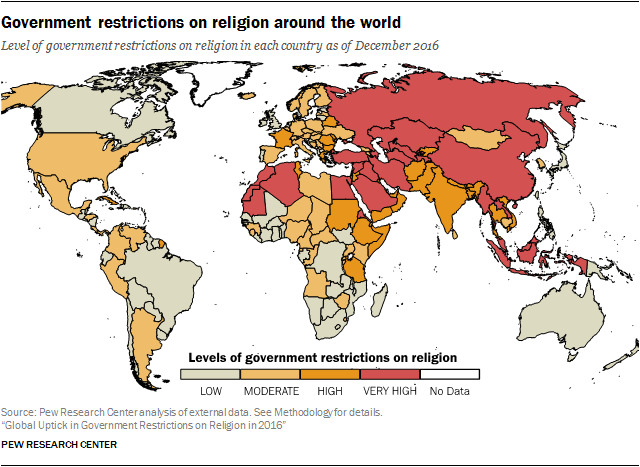 In 2016, the global median level of social hostilities decreased slightly by 0.2 points. But while scores decreased in three regions – the Asia-Pacific region, the Middle East-North Africa region and sub-Saharan Africa – they increased in Europe and the Americas. 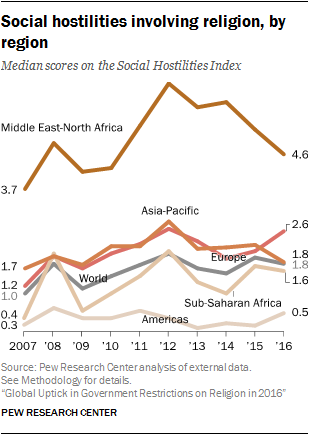 The Middle East-North Africa region had the largest decrease in its median social hostility score (a drop of 0.6 points). But despite a general decline in its median score since 2014, the Middle East and North Africa still had the highest median level of social hostilities (4.6) and was more than double the global median (1.8) in 2016. Out of the 20 countries in the region, nine had increases in hostilities, nine had decreases and two had no change in their scores from 2015 to 2016. Tunisia had an especially large decrease in its score on the Social Hostilities Index (3.6 in 2016 vs. 5.3 in 2015). In previous years, there had been more reported cases of Salafists attacking religious groups that did not adhere to their interpretations of Islam, including incidents targeting Sufi shrines and Shiite events.68

Europe, meanwhile, had the second-highest median social hostilities score (2.6) and the largest increase in score (0.5 points) among the five regions. There were tensions between religious groups in seven additional countries in 2016. In Austria, for example, the Austrian Jewish Community reported rising fears of anti-Semitic incidents perpetrated by Muslim refugees. 69 In addition, eight European countries experienced increased activity by organized groups attempting to dominate public life with their perspective on religion, mainly targeting Muslims. In Portugal, for example, the National Renewal Party organized a protest against the “Islamic invasion” and left two pigs’ heads near the site of a future mosque.70 (Some of these groups were categorized as nationalist groups; for more details on rising levels of nationalism in Europe, see the Overview of this report.)

The Asia-Pacific region’s median SHI score (1.8) declined slightly in 2016 and was about the same as the global median. The decrease was due in part to fewer reported cases of religious groups being assaulted or displaced for religious activities that were offensive to the majority faith (29 countries in 2015 vs. 24 in 2016). Although the median social hostilities score for the region decreased somewhat, there were still pockets with high levels of hostilities. In India, Sikhs were often harassed by Hindu nationalists for traditional beliefs and practices, including wearing Sikh dress and carrying religious items like the kirpan (a type of ceremonial sword).71

In sub-Saharan Africa, the median level of social hostilities had a very slight decrease of 0.1 points since 2015, with fewer incidents of mob violence reported in 2016.

In contrast, the Americas experienced a small increase in its median score, but remained the lowest-scoring region in social hostilities, with a median score of just 0.5 out of 10. The slight increase was due to more incidents of organized groups dominating public life with their views on religion, groups and individuals using violence or the threat of violence to enforce religious norms, and religious groups being assaulted or displaced for religious activities that were offensive to the majority faith. For example, Mexico had a rise in score that was due in part to hostilities between Catholic villagers and Protestants, gang violence against religious leaders who spoke out against gangs, and discrimination by indigenous communities toward members of a minority faith.72 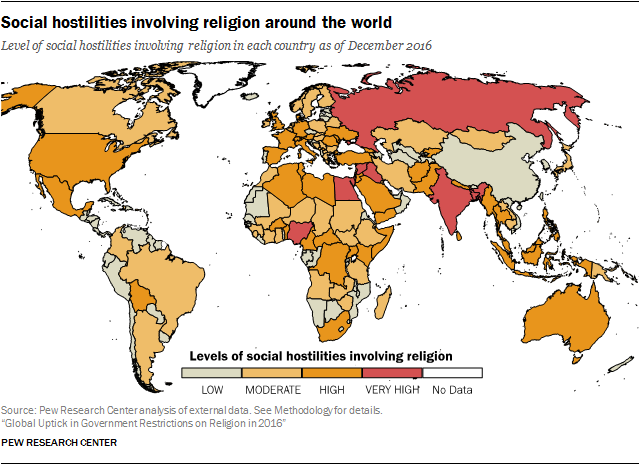 Next: 4. Among the 25 most populous countries, Egypt, Russia, India, Indonesia and Turkey had the highest overall restrictions on religion in 2016
← Prev Page
Page1Page2Page3You are reading page4Page5Page6Page7
Next Page →