When looking at overall levels of restrictions in 2015 – whether resulting from government policies and actions or from hostile acts by private individuals, organizations or social groups – the new study finds that 40% of countries had high or very high levels of restrictions, up from 34% in 2014.

In addition to a rise in the percentage of countries with high or very high levels of government restrictions and social hostilities involving religion, religious restrictions also rose in 2015 by other measures. For example, more countries saw their scores on the Government Restrictions Index (based on 20 indicators of government restrictions on religion) increase rather than decrease (see Chapter 1). And the global median score on the Social Hostilities Index, based on 13 measures of social hostilities involving religion, ticked up in 2015 (see Chapter 3).

The global rise in social hostilities reflected a number of factors, including increases in mob violence related to religion, individuals being assaulted or displaced due to their faith, and incidents where violence was used to enforce religious norms. In Europe, for instance, there were 17 countries where incidents of religion-related mob violence were reported in 2015, up from nine the previous year. And sub-Saharan Africa saw a spread in violence used to enforce religious norms, such as the targeting of people with albinism for rituals by witch doctors. This type of hostility was reported in 25 countries in sub-Saharan Africa in 2015, up from nine countries in 2014. (For more on rising religious restrictions in sub-Saharan Africa, see sidebar in Chapter 3.)

Government harassment and use of force rising in Europe, along with social hostilities against Muslims

Some incidents of government harassment measured by this study – which are not always physical, but may include derogatory statements by public officials or discrimination against certain religious groups – were related to Europe’s incoming refugee population. In 2015, 1.3 million migrants applied for asylum in Europe, nearly doubling the previous annual high of about 700,000 in 1992, following the collapse of the Soviet Union. More than half (54%) came from three Muslim-majority countries – Syria, Afghanistan and Iraq.

One such example involved Hungary’s prime minister, Viktor Orban, who complained about the religious makeup of refugees coming into the country. In September 2015, he wrote in a German newspaper, “Those arriving have been raised in another religion, and represent a radically different culture. Most of them are not Christians, but Muslims.” He later told journalists, “I think we have a right to decide that we do not want a large number of Muslim people in our country,” and in another interview said “the Islamic religion and culture do not blend with Christian religion and culture; it is a different way of life.”3

Similarly, neighboring Slovakia rejected European Union mandatory refugee quotas, but said it would accept 200 Christian refugees from Syria. In August 2015, the Ministry of Interior explained the decision, saying Christian refugees would be better able to assimilate into Slovakian society than Muslim refugees given the lack of officially recognized mosques in the country. Earlier in the year, the leader of the Slovak National Party, Andrej Danko, had proposed a new law that would make it impossible to build Islamic religious buildings in the country.4

In addition to harassment by government officials, many European governments employed force against religious groups. For example, in February of 2015, German police raided the mosque of the Islamic Cultural Center in Bremen; the police said they suspected that the mosque supported Salafist groups and that a person associated with the mosque was distributing automatic weapons for a terror attack. Police broke down the front door of the mosque, handcuffed worshippers and forced some to lie on the floor for hours. No weapons were found in the mosque. In July, a Bremen regional court ruled that the search was unlawful.5

These incidents took place in a climate influenced by threats and attacks from religiously inspired terrorist groups. France experienced several religion-related terror attacks in 2015, including the Jan. 7 shooting at the offices of the satirical magazine Charlie Hebdo and the Nov. 13 attacks claimed by the Islamic State in Iraq and Syria (ISIS) at the Bataclan concert hall and various other locations throughout Paris.6 In the days following the Paris attacks, Germany cancelled an international soccer match because of security threats, and Belgian authorities arrested 16 people suspected of planning similar acts.7

Altogether, European law enforcement officials reported record numbers of terrorist attacks either carried out or prevented by authorities in 2015, although not all of these events were directly related to religion.8 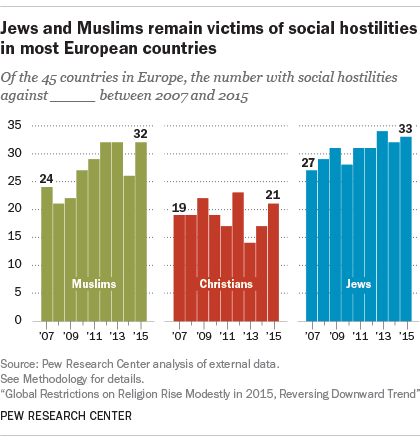 In the wake of the Charlie Hebdo and Bataclan concert hall shootings, some Muslims in France faced violent attacks by social groups or individuals. For example, two Muslim places of worship in the cities of Le Mans and Narbonne were attacked by grenades and gunshots the day after the Charlie Hebdo shooting. France’s Interior Ministry reported that anti-Muslim incidents more than tripled in 2015, including cases of hate speech, vandalism and violence against individuals.9

Vandals in Spain also targeted mosques after the Charlie Hebdo shooting in January of 2015.10 Perpetrators drew swastikas and threats on Spanish mosques and Islamic centers on four separate occasions that month.

In Slovakia, far-right political groups organized protests against the “Islamization of Europe and Slovakia,” drawing an estimated 3,000-5,000 people in Bratislava in June. The protest was called “STOP to the Islamization of Europe! Together against the Brussels dictate, for a Europe for Europeans.” Groups held two more protests in September and October along a similar theme.11

This is the eighth in a series of reports by Pew Research Center analyzing the extent to which governments and societies around the world impinge on religious beliefs and practices. The studies are part of the Pew-Templeton Global Religious Futures project, which analyzes religious change and its impact on societies around the world. The project is jointly funded by The Pew Charitable Trusts and the John Templeton Foundation.

To track these indicators of government restrictions and social hostilities, researchers combed through more than a dozen publicly available, widely cited sources of information, including the U.S. State Department’s annual reports on international religious freedom and annual reports from the U.S. Commission on International Religious Freedom, as well as reports from a variety of European and U.N. bodies and several independent, nongovernmental organizations. (See Methodology for more details on sources used in the study.) 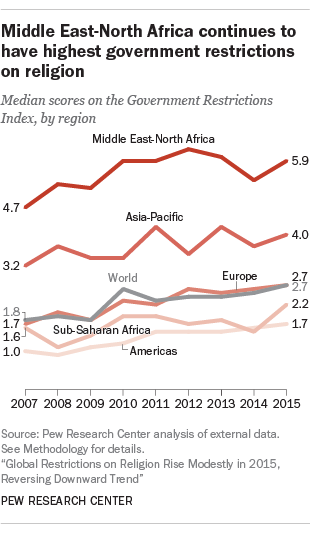 The new study also examines religious restrictions by region. The sharpest increase in median Government Restrictions Index score in 2015 occurred in sub-Saharan Africa, rising to 2.2 from 1.5 in 2014 (see sidebar in Chapter 3 for more information on changes in sub-Saharan Africa).12 But when looking at long-term trends, it is clear that a few other regions, including the Asia-Pacific region and Europe, have seen greater increases in median levels of government restrictions on religion since 2007. Indeed, the Middle East-North Africa region has seen the largest increase in government restrictions since 2007 and continued to have the highest level of these restrictions in 2015, with the region’s median score increasing to 5.9 from 5.4 in 2014. 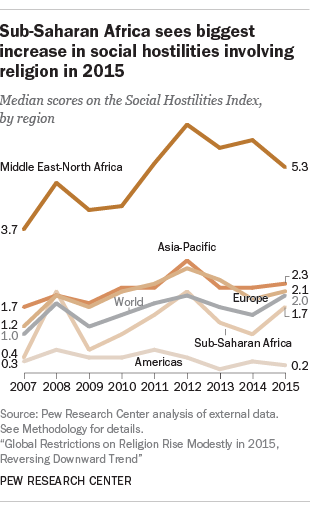 Europe was one of the two regions where social hostilities toward religion rose in 2015, but sub-Saharan Africa experienced the largest increase in its median score during the year. The Middle East-North Africa region continued to have the highest levels of hostilities, despite a decline in 2015.

Combining government restrictions and social hostilities, four-in-ten of the countries included in the study are in the most restrictive categories (high or very high). But some of these countries are among the world’s most populous (such as Indonesia and Pakistan). As a result, 79% of the world’s population lived in countries with high or very high levels of restrictions and/or hostilities in 2015 (up from 74% in 2014). It is important to note, however, that these restrictions and hostilities do not necessarily affect the religious groups and citizens of these countries equally, as certain groups or individuals may be targeted more frequently by these policies and actions than others.

Muslims and Christians – who together make up more than half of the global population – continued to be harassed in the highest number of countries. The study also finds that the number of countries where Jews were harassed fell slightly in 2015, after years of steady increases.

Next: 1. Rise in countries with ‘very high’ government restrictions on religion in 2015
← Prev Page
You are reading page1Page2Page3Page4Page5Page6Page7
Next Page →