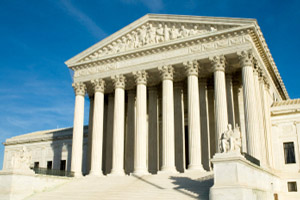 People have been fighting over same-sex marriage in courtrooms around the country for more than 20 years. Until recently, however, most of the action has taken place in state courts. The Supreme Court’s decision to take the DOMA case (United States v. Windsor) and the Proposition 8 case (Hollingsworth v. Perry) shifts the judicial focus from state to federal courts. It also raises the stakes: While state court rulings impact a particular state, federal cases involve federal constitutional principles that could apply nationwide, as discussed in a recent Pew Research Center legal analysis of the two cases.

While the Supreme Court has an opportunity in these cases to rule on core constitutional questions, that doesn’t mean it necessarily will. Indeed, the court could decide that the parties opposing same-sex marriage lack the right to defend Proposition 8 and DOMA in court (a legal concept known as “standing”). If standing is granted, it still is possible that the court will not address the broad constitutional question of whether same-sex couples have a right to marry under the U.S. Constitution and will choose instead to rule more narrowly in both cases.

The DOMA case (Windsor) does not directly address the question of whether the U.S. Constitution protects the right of same-sex couples to wed. The case involves a different constitutional question: Does the federal government’s treatment of gays and lesbians under DOMA discriminate against them in such a way as to violate their constitutional rights?

The Proposition 8 case (Perry) might offer a better vehicle for the court to address the core question of whether the U.S. Constitution guarantees same-sex couples the right to marry. That’s because it involves a decision by a state, California, to prohibit gays and lesbians from marrying. But even in this case, the court could strike down California’s ban on same-sex marriage without ruling on the broader constitutional question. Indeed, even if the court were to strike down Proposition 8 in Perry, some legal scholars believe it still might not use the case as a vehicle to rule broadly on the constitutionality of restrictions on same-sex marriage and instead might craft a narrower decision that allows most states to decide their own marriage policies.

How could the court strike down Proposition 8 and still give other states a free hand to set their own marriage policies? The answer lies in Proposition 8’s unique history. Proposition 8 was approved by California voters six months after the state’s highest court had ruled that gays and lesbians had the right to marry – and after thousands of same-sex couples took advantage of this ruling and got married. In an earlier lower court decision in this case, the 9th U.S. Circuit Court of Appeals ruled (PDF) that California cannot single out a minority group and remove an existing right (in this case, the pre-Proposition 8 right of same sex couples to marry) without the government first showing that it had a rational or legitimate basis for this discriminatory action – something the state of California failed to do, according to the court of appeals.

If the Supreme Court upholds the 9th Circuit’s ruling, and uses the same legal rationale to do so, it would not undermine other states’ bans on same-sex marriage. A narrow decision of this sort would prevent only states that have already granted marital rights to gays and lesbians from subsequently taking them away. Of course, if the high court upholds Proposition 8, it will, by definition, have effectively ruled that the U.S. Constitution does not protect same-sex couples against state laws prohibiting them from marrying.

While the Supreme Court could use Windsor to decide whether the U.S. Constitution grants same-sex couples the right to marry, many legal scholars believe the high court is more likely to focus on whether DOMA unconstitutionally discriminates against gays and lesbians, rather than on whether there is a right to same-sex marriage. Indeed, the 2nd U.S. Circuit Court of Appeals (PDF), in its earlier decision in Windsor striking down DOMA, ruled that the statute is unconstitutionally discriminatory.

Since 2003, eight other states – Connecticut, Iowa, Maine, Maryland, New Hampshire, New York, Vermont and Washington State – as well as the District of Columbia have legalized same-sex marriage. Bills to legalize same-sex marriage currently are being considered in three additional states – Illinois,Rhode Island and Minnesota. By contrast, over the last two decades 30 states have added language to their constitutions banning same-sex marriage.

According to polling from the Pew Research Center, public attitudes toward same-sex marriage have shifted markedly over the past decade. Polling conducted in 2003 found that most Americans (58%) were opposed to allowing gays and lesbians to marry legally, and just a third (33%) were in favor. A new survey by the Pew Research Center, conducted March 13-17, 2013, among 1,501 adults nationwide, confirms that these figures have flipped, with 49% supporting same-sex marriage and 44% opposed.

In recent years, many political leaders have voiced support for letting gays and lesbians marry legally. In May 2012, for instance, President Barack Obama declared that he supports same-sex marriage. Former President Bill Clinton, who signed DOMA into law in 1996, recently wrote an op-ed in The Washington Post urging the Supreme Court to overturn the law. And in a video released on March 18, former Secretary of State Hillary Clinton announced she supports same-sex marriage, both “personally and as a matter of policy and law.”

Some Republicans also recently have come out in favor of same-sex marriage. In February, for example, a group of prominent Republicans (PDF), including former Utah Governor Jon Huntsman and former Deputy Secretary of Defense Paul Wolfowitz, signed a friend-of-the-court brief urging the Supreme Court to strike down Proposition 8. And Sen. Rob Portman (R-Ohio), who had co-sponsored the original DOMA bill when he served in the U.S. House of Representatives, also recently announced that he now supports same-sex marriage. In a March 15 op-ed in The Columbus Dispatch, Portman said he made his decision because one of his sons is gay and he “wants all three of his kids to lead happy, meaningful lives with the people they love.”