As the 2012 presidential election approaches, the partisan affiliations of the electorate have shifted significantly since 2008. In 12 surveys conducted over the course of 2011 by the Pew Research Center for the People & the Press among a total of more than 15,000 registered voters, 34% described themselves as Democrats, down four points compared with 2008 (38%). Over the same period, the percentage of voters describing themselves as Republicans has held steady at 28%, while the total saying they are politically independent or have no partisan preference has risen four points (from 34% in 2008 to 38% in 2011).

The Democrats’ decline is especially apparent when the partisan leanings of independents are taken into account. 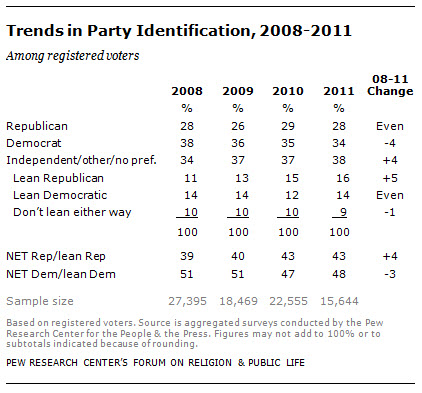 Though there has been no change in the share of the electorate identifying with the GOP, there has been a significant increase in the number of Republican-leaning independents (from 11% in 2008 to 16% in 2011). Taken together, the share of voters who say they are Republican or that they lean toward the GOP has grown from 39% in 2008 to 43% in 2011, while the number saying they identify with or lean toward the Democratic Party has declined from 51% to 48%. A 12-point Democratic advantage in 2008 has shrunk to just five points heading into the 2012 presidential election year. This marks a continuation of a trend first observed in 2010, when 43% of the electorate supported or leaned toward the GOP while 47% favored the Democratic Party. (For a detailed analysis of longer-term trends in party identification and of changes in the partisan preferences of a variety of demographic groups, see “GOP Makes Big Gains among White Voters, Especially among the Young and Poor,” July 22, 2011.)

A new analysis shows that the share of voters identifying with or leaning toward the GOP has either grown or held steady in every major religious group. This includes both religious groups that are part of the GOP’s traditional constituency as well as some groups that have tended to be more aligned with the Democratic Party, including Jewish voters. In general, the pattern among religious groups mirrors that among the electorate as a whole; the number of voters who identify as a Democrat has declined, while the number saying they lean toward the GOP has risen. 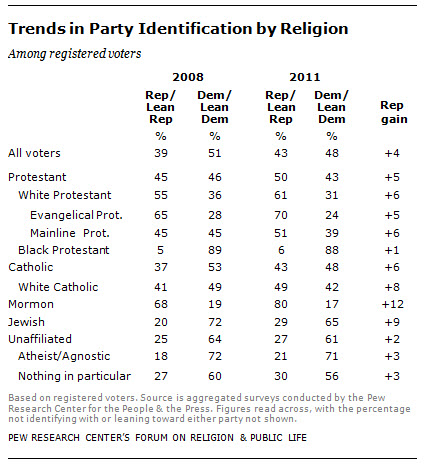 Among white evangelical Protestants (a traditionally Republican group), support for the GOP has grown from 65% in 2008 to 70% today. The GOP has also posted gains among Mormons, with 80% now saying they identify with or lean toward the Republican Party. Republican gains are also apparent among white mainline Protestants (who were evenly divided between the parties in 2008 but who now favor the GOP by a 12-point margin) and white non-Hispanic Catholics (among whom an eight-point Democratic advantage in 2008 has become a seven-point Republican advantage at the end of 2011). Even Jewish voters, who have traditionally been and remain one of the strongest Democratic constituencies, have moved noticeably in the Republican direction; Jewish voters favored the Democrats by a 52-point margin in 2008 but now prefer the Democratic Party by a significantly smaller 36-point margin. There has been less change in the partisanship of black Protestants and the religiously unaffiliated, two other strongly Democratic groups.

The analysis shows that across several religious groups, the move toward the GOP has been at least as large – if not more pronounced – among those under age 30 as among those 30 and older. White evangelicals under 30, for instance, are now more heavily Republican than those over 30 (82% vs. 69%); in 2008, by contrast, the partisan preferences of younger evangelicals closely matched those of evangelicals over age 30. And among white non-Hispanic Catholics under age 30, support for the GOP has increased from 41% in 2008 to 54% in 2011.

Next: By Religious Affiliation
← Prev Page
You are reading page1Page2Page3Page4Page5
Next Page →