As the country enters into the 2012 presidential election cycle, the electorate’s partisan affiliations have shifted significantly since Barack Obama won office nearly three years ago. In particular, the Democrats hold a much narrower edge than they did in 2008, particularly when the partisan leanings of independents are taken into account. 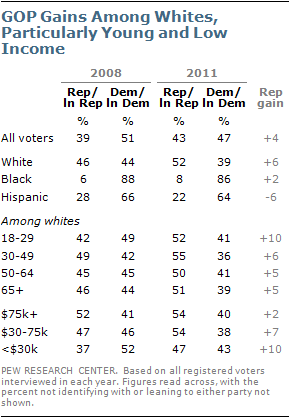 Notably, the GOP gains have occurred only among white voters; a 2-point Republican edge among whites in 2008 (46% to 44%) has widened to a 13-point lead today (52% to 39%). In sharp contrast, the partisan attachments of black and Hispanic voters have remained consistently Democratic.

While Republican gains in leaned party identification span nearly all subgroups of whites, they are particularly pronounced among the young and poor. A seven-point Democratic advantage among whites under age 30 three years ago has turned into an 11-point GOP advantage today. And a 15-point Democratic advantage among whites earning less than $30,000 annually has swung to a slim four-point Republican edge today.

Yet, the Republican Party’s growth has been limited in two important ways. First, the steep gains in GOP leaning that helped the party in the 2010 midterms have not continued, as the overall balance of partisan attachments has held steady in the first half of 2011. Second, while more independents say they “lean” toward the Republican Party, the GOP has not gained in actual party affiliation since 2008 – just 28% of registered voters, in both years, call themselves Republicans. Instead, the growth category continues to be political independents, with a record high 34% of registered voters choosing this label in 2011. 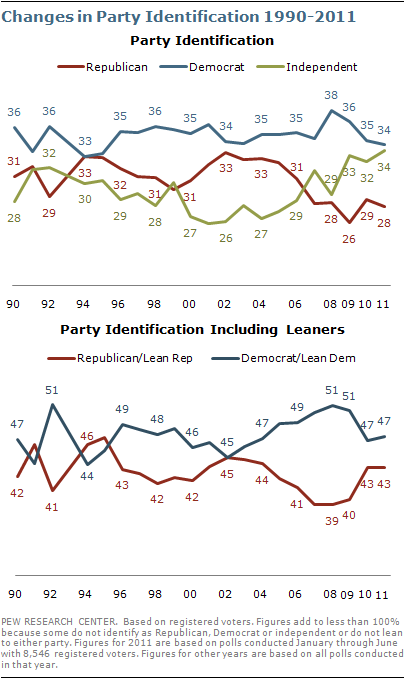 Analysis of the overall balance of partisan identification in all Pew Research Center polling conducted in each year – updated with data from the first six months of 2011 –finds that as the number of Democrats has fallen from a quarter-century high in 2008, the number of self-proclaimed independents has continued to grow. As a result, there are now as many independent voters as Democrats (34% each) – the first time this has occurred in more than two decades of Pew Research Center surveys, and, by all indications, the highest percent independent since party identification was first measured in the late 1930s.

Most of this shift in the balance of partisan attachment occurred prior to this year. The sharp gains in Republican leanings between 2009 and 2010 have not continued into the first half of 2011. [See detailed table at back of report for a full demographic breakdown of party identification in 2008, 2009, 2010 and 2011.] 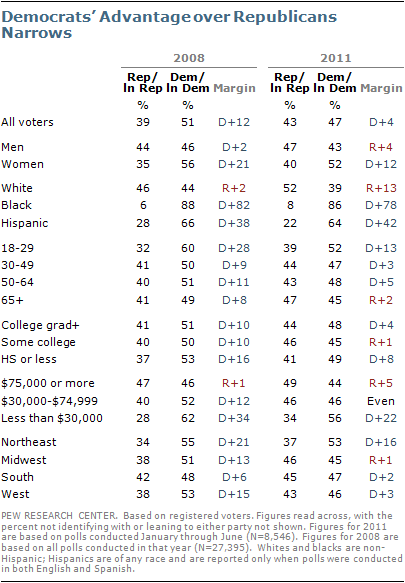 Republican gains have been substantial among voters with family incomes under $75,000. Notably, Democrats held a 12-point advantage among middle income voters ($30,000-$74,999) in 2008, but now as many identify with the Republican Party as with the Democratic Party. Democrats continue to maintain their advantage among lower income voters, but it is smaller now than in 2008. 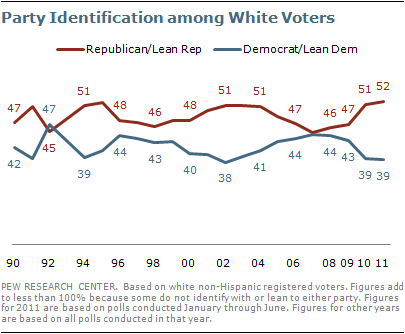 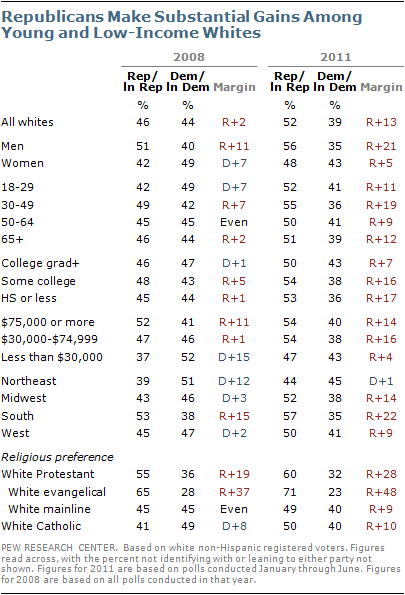 While the GOP’s gains have been particularly evident among young whites, they have picked up support across all age groups as well. Among white voters ages 30 to 49, the Republican lead over Democrats has grown from seven points to 19 points. Among voters ages 50 to 64, who were evenly split in 2008, Republicans now have a nine-point advantage. The GOP’ had a slight 2-point edge among white voters 65 and older three years ago; that has increased to 12 points in the first half of 2011. 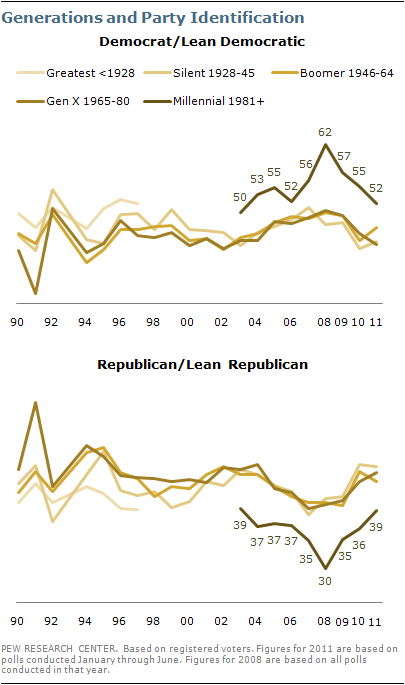 The Millennial generation – those born after 1980 – were a topic of much discussion in the 2008 election. These young voters – the oldest turned 27 that year, and are turning 30 now – leaned Democratic by roughly two-to-one in the 2008 election, and their commitment to Barack Obama, and relatively high voter turnout, was a substantial factor in the election’s outcome.

While these voters remain the most Democratically oriented generation today, the advantage has narrowed substantially since 2008. Currently, 52% of Millennial voters are Democrats or lean to the Democratic Party while 39% are Republicans or lean to the GOP. This 13-point edge is less than half the size of the 32-point edge Democrats held three years ago.

Among voters in other generations, Democrats have lost adherents while Republicans have gained. But these changes have not been as large as those among Millennials.

Next: About the Party Identification Database
← Prev Page
You are reading page1Page2
Next Page →

A Closer Look at the Parties in 2012
The Parties on the Eve of the 2016 Election: Two Coalitions, Moving Further Apart
A Deep Dive Into Party Affiliation
Blue States Get Even More Democratic