Among the four-in-ten Florida primary voters who described themselves as white evangelical Christians, 38% voted for Gingrich (who is Catholic), while 36% supported Romney (who is Mormon). About one-in-five Florida evangelicals (19%) supported Santorum (a Catholic), while 5% voted for Ron Paul (who is Baptist). Romney was the clear favorite of non-evangelicals, receiving 54% of their support. 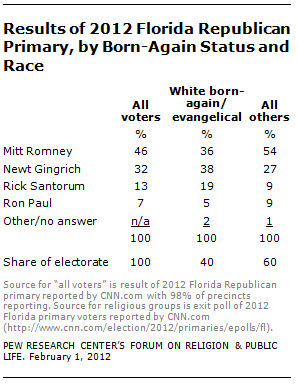 In the 2008 Florida Republican primary, Romney finished slightly behind John McCain (36% of Florida primary voters supported McCain vs. 31% who voted for Romney). Romney ran about even with both McCain and Mike Huckabee among evangelical voters in Florida in 2008. Among non-evangelicals, 38% voted for McCain in 2008, while 32% supported Romney and 19% voted for Rudy Giuliani. 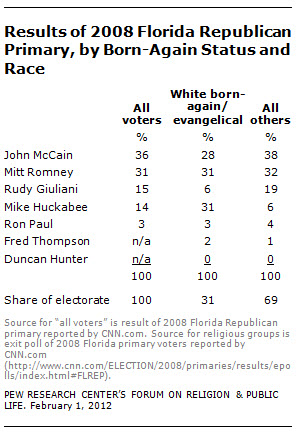 Nearly six-in-ten 2012 Florida GOP primary voters described themselves as Protestant, and they split their votes about evenly between Romney (42%) and Gingrich (36%), with far fewer supporting Santorum (13%) and Paul (7%). Romney performed much better among Florida Catholics, receiving 56% of their votes and nearly doubling Gingrich’s total among this group (30%). 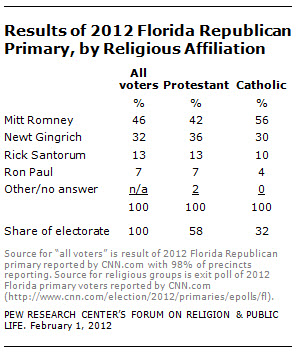 In 2008, Romney and McCain received roughly equivalent levels of support from Protestants in the Florida primary (34% voted for Romney, 31% for McCain). McCain was the winner among Catholics polled in Florida in 2008, receiving 40% of their votes compared with 29% for Romney and 22% for Giuliani. 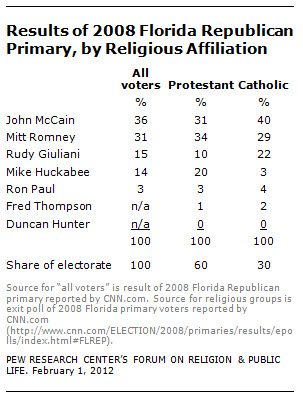