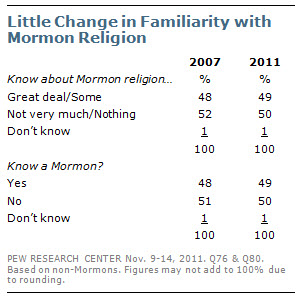 Familiarity with Mormonism is most common in the western United States, where 73% of non-Mormons say they know someone who is Mormon, and 58% say they know a great deal or some about the Mormon religion. Knowing a Mormon and knowledge of Mormonism is significantly less common in other parts of the country. 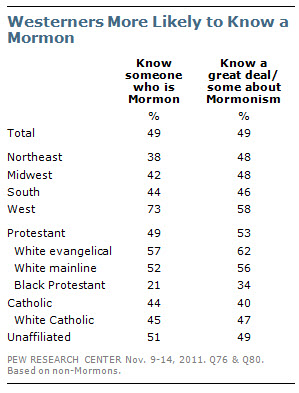 Compared with other religious groups, far more white evangelical Protestants say that Mormons are not Christian. Nearly half of white evangelicals (47%) say that the Mormon religion is not a Christian religion, while 39% say it is. By contrast, majorities of white mainline Protestants (62%), white Catholics (59%) and the religiously unaffiliated (56%) express the view that the Mormon religion is a Christian religion. 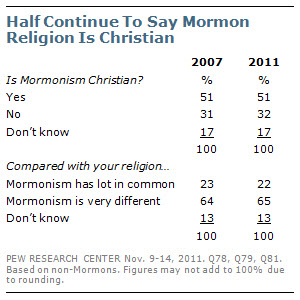 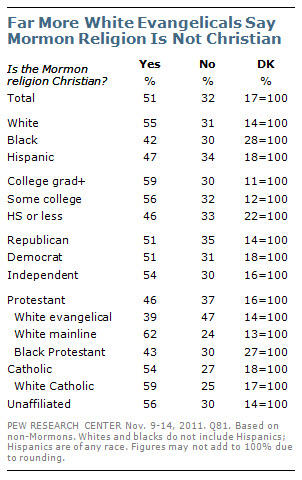 When asked in an open-ended question what one word best describes the Mormon religion, the most common response is cult, offered by 100 respondents in this survey, or about 5% of the public. Other commonly offered responses include family or family values (57 responses), different (55 responses), polygamy (49 responses) and good or good people (45 responses).

White evangelical Protestants are more likely than members of other religions to use the word cult to describe the Mormon religion, with 11% offering this word. By comparison, cult is offered as the single best descriptor by 5% of white mainline Protestants, 5% of black Protestants, 2% of the religiously unaffiliated and 1% of white Catholics.

Many of the positive words used to describe the Mormon religion focus on the devotion of its adherents: 28 respondents use the word dedicated, 19 respondents offer the words devout or devoted and 19 say faith or faithful.

The public’s lack of familiarity with the Mormon religion also is reflected in the one-word descriptions. While 55 respondents use the word different, 24 use the words confused or confusing, 18 say strange and 10 use the word odd to describe the religion.

Romney’s Mormon Faith Likely a Factor in Primaries, Not in a General Election Religion and Campaign 2012
Views of the Mormon Religion
About the Survey

1
Teens, Social Media and Technology 2022
2
Quiz: Where do you fit in the political typology?
3
What the data says about gun deaths in the U.S.
4
Rising Share of U.S. Adults Are Living Without a Spouse or Partner
5
Partisanship Colors Views of COVID-19 Handling Across Advanced Economies