Since early 2001, when the Bush administration first established a White House office to expand the role of religious organizations in providing social services, there have been clear divisions in public attitudes toward faith-based initiatives. The public has continuously supported the principle of allowing houses of worship, along with other organizations, to apply for federal funds to provide social services.

But there remains substantial opposition to the prospect of certain religious groups, notably Muslim mosques, taking on such a role. And the public overwhelmingly continues to reject allowing groups that encourage religious conversion to apply for federal funding to provide social services.

Currently, 67% say they favor allowing churches and other houses of worship to apply, along with other organizations, for government funding to provide social services, such as job training or drug treatment counseling, to those who need them. Support for this practice peaked in March 2001 at 75%.

Republican support for such initiatives, which rose early in Bush’s first term, has declined. Currently, 63% of Republicans say they favor allowing churches and other religious groups to apply for federal funds to provide social services, down from 81% in March 2001.

African Americans remain strongly supportive of faith-based initiatives, while white support has slipped. About eight-in-ten African Americans (81%) say they favor allowing churches to apply for government funding to provide social services, which is largely unchanged from March 2001 (83%). White support for such programs has fallen by 10 points (from 74% to 64%).

Support for faith-based initiatives has declined among most religious groups, with the exception of black Protestants. Those with no religious affiliation also are increasingly skeptical of faith-based groups applying for government funding to provide services: just 53% favor that idea today, down from 67% in 2001.

The Contributions of Churches

Most Americans continue to say that churches, synagogues and other religious organizations contribute at least some to solving important social problems. But only about a quarter (24%) believes that churches contribute a great deal to solving major problems. These attitudes have changed little in recent years.

Religiously observant people and white evangelical Protestants are much more likely than others to say that churches contribute a great deal to solving important social problems. Nearly four-in-ten white evangelicals (37%) say churches contribute a great deal in this regard, compared with about a quarter of black Protestants (26%) and all Catholics (25%), and even fewer white mainline Protestants (16%) and the unaffiliated (8%).

Who Can Do Best in Helping the Needy?

This represents a change since 2001, when a plurality (37%) said religious organizations could do the best job of providing services to people in need. There have been declines in the proportions of both Democrats and Republicans who say religious organizations can do best in providing services to the needy, though Republicans are still far more likely to express this view than are Democrats (40% vs. 23%).

White evangelicals remain the most likely to believe that religious organizations can do best in delivering social services to the needy, but fewer evangelicals express this view today than did so in 2001 (47% vs. 53% then).

However, the public continues to oppose allowing groups that encourage religious conversion to apply for government funding to provide social services. About six-in-ten (61%) oppose this, which is unchanged from 2001 (59%).

Public views about whether specific religious groups should be eligible for government funding to provide social services also are stable. Solid majorities say Catholic churches (61%), Protestant churches (59%), evangelical Christian churches (55%) and Jewish synagogues (55%) should be able to apply for funding to provide services, though in each case more than a third is opposed. 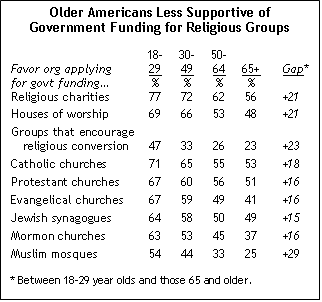 Older Americans, particularly those 65 and older, continue to be very skeptical of faith-based initiatives. And they are far less likely than younger people to favor religious groups generally – and those associated with specific denominations – applying for government funding to provide social services to the needy.

By nearly two-to-one (61% to 32%), people oppose allowing groups that encourage religious conversion to apply for federal funding to provide services for the needy.

But black Protestants are divided: 46% favor these groups applying for government funding to provide social services while 43% are opposed.

In spite of broad support for a variety of religious groups applying for government aid to provide social services, Americans draw the line at letting religious organizations that use government funds hire only people who share their religious beliefs. An overwhelming majority (73%) say religious groups should not be allowed to do this, down slightly from 78% in 2001.

Even the strongest supporters of funding for faith-based programs are opposed to allowing groups that receive federal funds to hire only people who share their religious beliefs. Majorities of both Republicans and Democrats say religious organizations that use government funds should not be able to do this, although Republicans are nearly twice as likely as Democrats to say such restricted hiring is acceptable (30% vs. 17%).

Religion and religious commitment play a role in shaping attitudes on hiring based on religion. White evangelical Protestants (36%) are about twice as likely as mainline Protestants, black Protestants and white non-Hispanic Catholics to favor permitting groups that receive federal funds to hire based on religious beliefs. Roughly a quarter of Hispanic Catholics (24%) also support this practice. Among Americans who attend worship services at least weekly, nearly a third (29%) say religious groups receiving government funds should be allowed to hire only people who share their religious beliefs, compared with 14% of those who seldom or never attend services.

More Americans Question Religion’s Role in Politics Section 1: The Mix of Religion and Politics Section 2: The Campaign, Candidates and Bush Section 3: Issues and the 2008 Election
Section 4: Faith-Based Aid Favored - With Reservations
Public Views of Faith-Based InitiativesThe Contributions of ChurchesWho Can Do Best in Helping the Needy?Views on Funding Specific GroupsOlder People WaryFew Favor Funding for Groups that ProselytizeReligious Groups DifferStrong Opposition to Religious Hiring
About the Survey