The broad contours of religion in the 2008 election campaign remain largely unchanged from previous election cycles. White evangelical Protestants remain overwhelmingly Republican, and they favor McCain over Obama by roughly the same margins that they favored Bush over his 2000 and 2004 Democratic opponents. But white evangelical Protestants express far less enthusiasm for McCain than they did for Bush. And despite Democratic gains in party identification in two key swing constituencies – white mainline Protestants and white Catholics – Obama is doing no better against McCain than either Gore or Kerry did against Bush.

While Obama leads McCain as the candidate who voters think shares their values overall, when voters rate their own moral values on a liberal/conservative spectrum, they place themselves far closer to McCain – on the conservative side of the scale – than they do to Obama on the liberal side. McCain is not seen as being as conservative on moral issues as Bush, and Obama is not seen as being as liberal as Bill Clinton on morality. 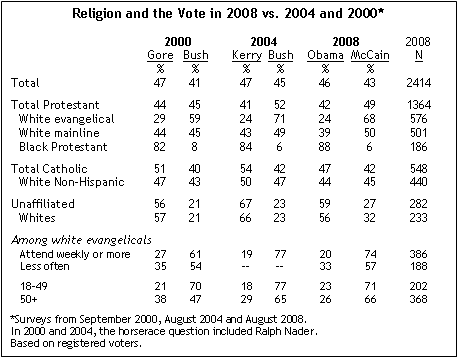 Religion and the Horserace

Several of the patterns of religious support seen in the 2004 presidential race continue to hold in 2008. White evangelical Protestants, mainstays of Bush’s base in both 2000 and 2004, support McCain over Obama by a wide margin. McCain leads Obama by 44-percentage points among white evangelicals – comparable to Bush’s 47-point lead over Kerry with this group in the summer of 2004, and even larger than Bush’s 30-point lead over Gore in the summer of 2000. As was the case four years ago, this advantage is more pronounced among the most religiously observant – evangelicals who attend church at least once a week favor McCain over Obama by a 74% to 20% margin. Even among younger evangelicals, McCain holds a substantial lead over Obama (71% to 23% among those 18 to 49 years old, and 70% to 24% among those under the age of 40).

Support among white mainline Protestants shows little change from the 2004 election cycle; McCain’s 50% to 39% lead over Obama among white mainline Protestants is roughly similar to the 49% to 43% lead Bush held over Kerry with this group. Among Catholics, however, there has been a small shift. Fewer than half of white non-Hispanic Catholics (44%) now support Obama; in August 2004, half (50%) supported Kerry.

As in past elections, black Protestants, who have supported Democratic candidates by ratios of greater than ten-to-one, now support Barack Obama to a similar degree (88% support Obama, compared with just 6% who support McCain). The religiously unaffiliated – another traditionally Democratic group – also heavily back Obama; he enjoys a greater than two-to-one (59% to 27%) advantage over McCain among those with no religious affiliation.

Among the 43% of voters who favor John McCain in Pew’s August survey, only 17% say they support him “strongly,” while 26% just lean toward him or favor him “only moderately.” This is roughly half the number of strong supporters that Bush had in August of 2004, when 32% of voters backed him strongly. Among voters who attend religious services at least once a week, this decline is even more pronounced – fully 45% of weekly attenders supported Bush strongly four years ago, compared with 21% who say the same about McCain today.

While white evangelicals back McCain at high levels overall, they express much less strong support than they did for Bush four years ago. Only 28% of this group supports McCain strongly, compared with fully 57% who asserted strong support for Bush in 2004. Further, evangelicals who support McCain today are far more likely to describe their vote as mostly a vote against Barack Obama than evangelicals who supported Bush four years ago in his race against John Kerry.

While overall strength of support for Barack Obama differs little from that of his Democratic predecessor, the strength of his support among Catholics is considerably weaker than Kerry’s. Today, only 19% of white non-Hispanic Catholics strongly support Obama; by contrast, Kerry enjoyed strong support from 31% of this group. At the same time, Catholic enthusiasm for John McCain is also substantially lower than it was for Bush four years ago.

Who “Shares My Values”?

A small plurality of American voters say that Barack Obama (47%) more than John McCain (39%) is the presidential candidate who most shares their values. But views differ substantially across religious lines. Most white evangelical Protestant voters (60%) – more than any other major religious group – say that McCain shares their values compared with just 27% who attribute this characteristic to Obama. White mainline Protestant voters are more evenly divided on the question of which presumptive nominee, McCain or Obama, most closely shares their values (45% vs. 37%, respectively). White non-Hispanic Catholics are also split, with 41% citing McCain and 45% Obama. The majority (56%) of voters with no religious affiliation say Obama shares their values, while 28% say this about McCain.

Meanwhile, just under half (48%) of voters say Obama has moral values that are either liberal (32%) or very liberal (16%). This places him well to the left of center in this dimension, though not quite as far left as Bill Clinton, who 55% rate as liberal or very liberal.

Not surprisingly, ratings of one’s own moral values, as well as of political figures, often differ substantially between voters of different religious affiliations. More than seven-in-ten (72%) white evangelical Protestant voters see themselves as morally conservative. Fewer (59%) say the same about John McCain, placing the average evangelical voter to the right of McCain. By a smaller margin, white evangelical Protestants also see themselves to the right of Bush – 33% rate themselves as very conservative when it comes to moral values, while just 18% say the same about Bush.

The average white mainline Protestant and white non-Hispanic Catholic offers a more moderate assessment of their moral values, though conservatives still outnumber liberals in both groups, making the average voter in either group more closely aligned with how they see McCain than Obama on this matter. By contrast, there are more liberals than conservatives when it comes to the moral values of religiously unaffiliated voters. As a result, the average religiously unaffiliated voter is closer to where they place Obama on this scale than where they place McCain.

Voters in all four of these religious groups give similar ratings of John McCain’s moral values – half or more see him as conservative. There is more variation in how these voters see Obama on this scale, with white evangelicals and white mainline Protestants placing Obama further to the left than white non-Hispanic Catholics. Most white evangelicals (58%) and white mainline Protestants (55%) see Obama as having liberal moral values, compared with 44% of white non-Hispanic Catholics. About half (51%) of religiously unaffiliated voters say the same.

As has been the case throughout the campaign, engagement with the current election is considerably higher than in previous years. Almost three-in-four voters (74%) say they have given “quite a lot” of thought to the election, compared with 69% four years ago, and just 59% in 2000. This increased engagement cuts across most religious groups. In particular, white evangelical engagement with the campaign remains high, despite their low level of enthusiasm for either candidate.

Support for Candidates’ Religiosity Associated With the Vote

While most (73%) voters say that it is important to them that a president have strong religious beliefs, those who feel most strongly about this favor McCain over Obama by a substantial margin (55% to 37%), while those voters who “mostly agree” with the statement are nearly evenly split between the two candidates and Obama has a clear edge (60% to 25%) among those who do not share this belief.

Views about displays of religious faith by politicians are also related to the vote – Obama leads McCain by 23 points among those who agree completely with the statement “it makes me uncomfortable when politicians talk about how religious they are,” while McCain leads Obama by 12 points among those who say they completely disagree. These patterns are similar to, if slightly weaker than, those seen in 2004.

The balance of party identification has shifted little among white evangelical Protestants. In polling since January, 62% identify with the Republican Party, while about half as many (30%) are Democrats or Democratic-leaners. Four years ago the margin was 66% to 28%. Democrats have made some gains among white mainline Protestants – the balance of party ID is now about even (45% Democratic, 44% Republican), compared with a 49% to 43% GOP advantage in 2004.

Democrats have opened a substantial 49% to 40% advantage among white non-Hispanic Catholics – four years ago the GOP held a slim 47% to 45% edge with this group. The last election year in which Democrats led by this kind of margin among Catholics was 1996, when they held a 51% to 41% edge in party identification.

Voters without a religious affiliation have become substantially more aligned with the Democratic Party over the past eight years. In 2000 just over half (53%) of those who describe themselves as atheists, agnostics or simply as having no religious preference said they were Democrats or leaned Democratic. That grew to 62% in 2004 and stands at 64% today. Meanwhile, the share of religiously unaffiliated voters who are Republicans fell from 30% in 2000 to 26% in 2004 to 23% today.

In the current survey, roughly two-thirds of Americans (66%) disapprove of the job George W. Bush is doing as president, while 28% approve of his performance. This performance rating has barely moved since March.

White evangelical Protestants remain more supportive of Bush than any other major religious group. But even among evangelicals, fewer than half (47%) approve of Bush’s performance in office, while 48% disapprove. Among white mainline Protestants, 61% disapprove and 32% approve, and the margin is even larger among white non-Hispanic Catholics (67% disapprove, 25% approve). Not surprisingly, black Protestants express the most criticism of President Bush, with fully 88% disapproving of his performance in office.

Almost three-quarters of Americans (74%) say they are dissatisfied with the way things are going in the country today, while 21% say they are satisfied. These figures have varied little since early February, when 70% were dissatisfied and 24% were satisfied. However, dissatisfaction is up substantially from recent years. Dissatisfaction has risen eight points since October 2007 and 19 points since the summer of 2004.

When it comes to evaluating the state of the nation, Americans of all religious faiths largely agree. Across all religious groups, more than seven-in-ten express dissatisfaction with the way things are going, with the highest rate among black Protestants (80%) and the lowest among white mainline and white evangelical Protestants (72% and 73%, respectively).

Nearly six-in-ten Americans (58%) disapprove of the job Democratic leaders in Congress are doing, the highest proportion giving a negative assessment since the question was first asked in June 2001. Disapproval has risen 24 points from January 2007, when Democrats took control of both houses of Congress.

Next: Section 3: Issues and the 2008 Election
← Prev Page
Page1Page2You are reading page3Page4Page5Page6
Next Page →

More Americans Question Religion’s Role in Politics Section 1: The Mix of Religion and Politics
Section 2: The Campaign, Candidates and Bush
Religion and the HorseraceLittle Enthusiasm for McCainWho "Shares My Values"?A "Moral Values" ScaleAll Religious Groups Highly EngagedSupport for Candidates' Religiosity Associated With the VoteParty Affiliation and ReligionBush Approval Among Religious GroupsBroad Dissatisfaction with National ConditionsDemocratic Leaders in Congress
Section 3: Issues and the 2008 Election Section 4: Faith-Based Aid Favored - With Reservations About the Survey