Pew Research Center conducted this study to understand Americans’ voting behavior in the 2020 election. Whenever possible, respondents to the survey were presented with the House and Senate candidates that will appear on their ballots by using information about their locations.

Some races do not include candidates of both major parties (for example, a few districts in California have two Democratic and no Republican candidates). Excluding these handful of races where there are not two major party candidates running does not meaningfully impact the conclusions of this report, but they have been included in the analyses presented here.

Everyone who took part in this survey is a member of Pew Research Center’s American Trends Panel (ATP), an online survey panel that is recruited through national, random sampling of residential addressees. This way nearly all U.S. adults have a chance of selection. The survey is weighted to be representative of the U.S. adult population by gender, race, ethnicity, partisan affiliation, education and other categories. Read more about the ATP’s methodology. 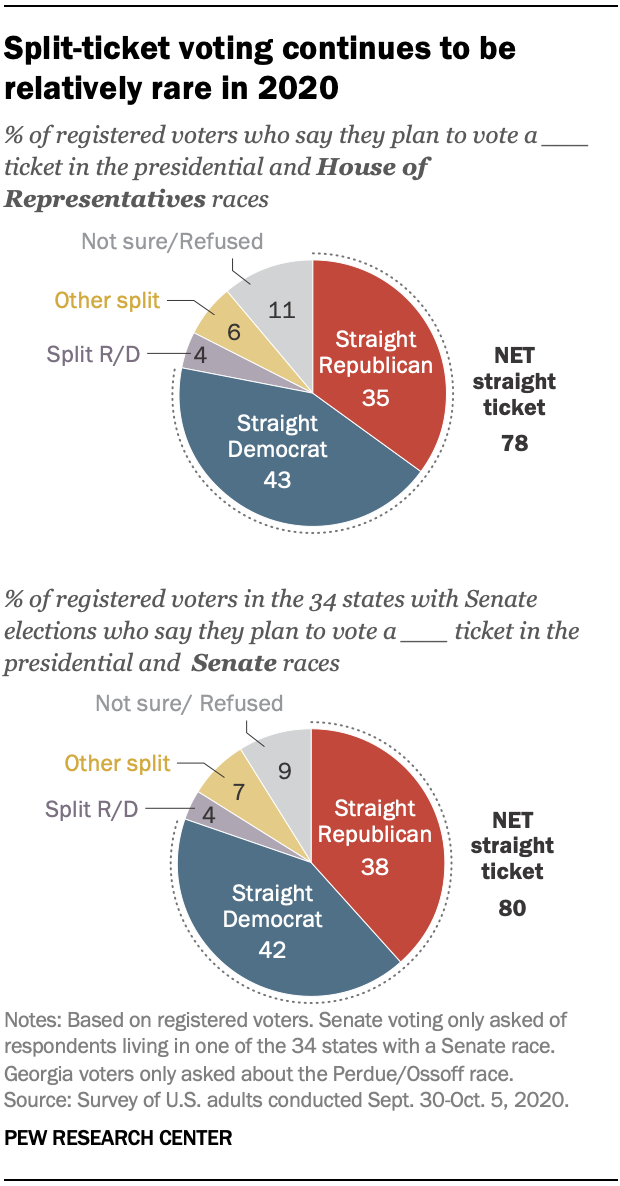 In an era of increasing partisanship, split-ticket voting continues to be rare in U.S. politics. With control of the Senate at stake on Nov. 3, just 4% of registered voters in states with a Senate contest say they will support Donald Trump or Joe Biden and a Senate candidate from the opposing party.

In voting for both the House and Senate, partisanship prevails. About eight-in-ten of voters (78%) say they will vote (or already have voted) for either Biden and the Democratic House of Representatives candidate (43% of all voters) or Trump and the Republican candidate (35% of all voters) in their congressional district.

Similarly, among those living in states with Senate races, the largest share of voters say they plan to vote for both Biden and the Democratic Senate candidate (42%) or Trump and the Republican Senate candidate (38%) in their state. A recent analysis of U.S. Senate elections since 2012 shows how rare it is for a Senate race to go a different way from a state’s votes in presidential elections. In 139 regular and special elections for the Senate since 2012, 88% have been won by candidates from the same party that won that state’s most recent presidential contest.

This analysis of split-ticket voting is based on Pew Research Center’s recent national survey, conducted Sept. 30 to Oct. 5 among 11,929 U.S. adults, including 10,543 registered voters in which Biden garners support from 52% of registered voters and Trump is supported by 42%. The survey used information about respondents’ locations to present survey-takers with the names of the candidates running in each congressional race. 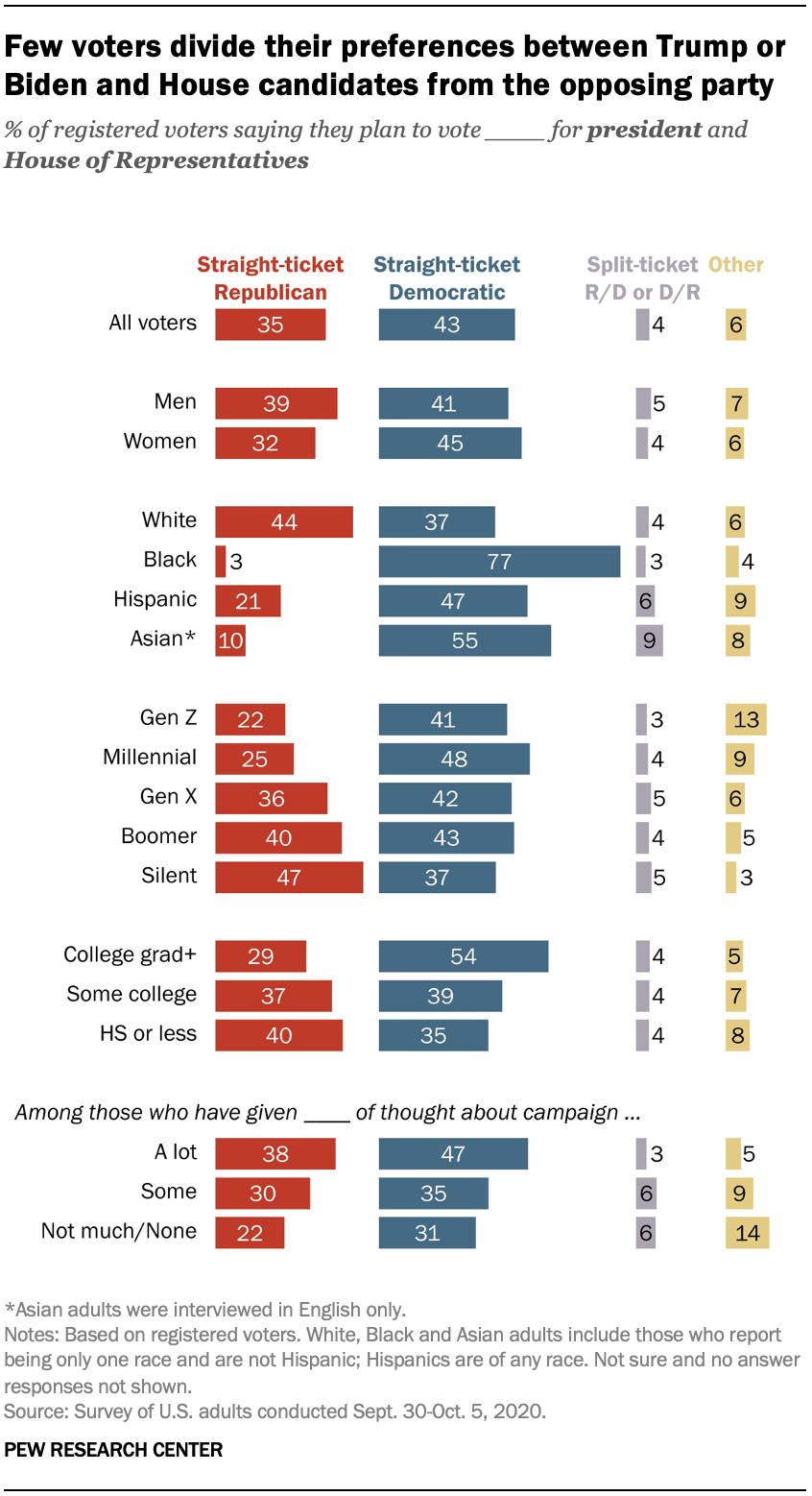 White voters are substantially more likely than voters of other racial and ethnic backgrounds to vote for Republican candidates in both the congressional and presidential elections.

The share of voters casting a straight-ticket Republican ballot in these elections increases steadily with age. Only 22% of Gen Z voters are voting this way, compared with nearly half (47%) of Silent Generation voters.

Gen Z and Millennial voters are also more likely than voters in older generations to support third- or fourth-party candidates for president; 13% of Gen Z voters favor non-major party candidates for either House or president, as do 9% of Millennial voters. Thus, larger shares of voters in these generations split their votes for president and the House. But just 3% of Gen Z voters and 4% of Millennials favor Biden and a Republican House candidate or Trump and a Democrat. That is comparable to the shares of older voters who divide preferences on a partisan basis in voting for president and the House.

Voters with a bachelor’s degree or more education are much more likely to vote a straight Democratic ticket in these races than are those with less education. There is no relationship between education and Republican-Democratic split-ticket voting; equal shares of voters (4%) across different levels of educational attainment vote this way.

Lower-engagement voters – those who say they have given less than “a lot” of thought to the presidential race – are more likely than others to split their tickets between the Republican and Democratic candidates in the presidential and congressional elections in their districts, though it is still very uncommon (6% of lower-engagement voters vs. 3% of those who are paying a lot of attention to the race). 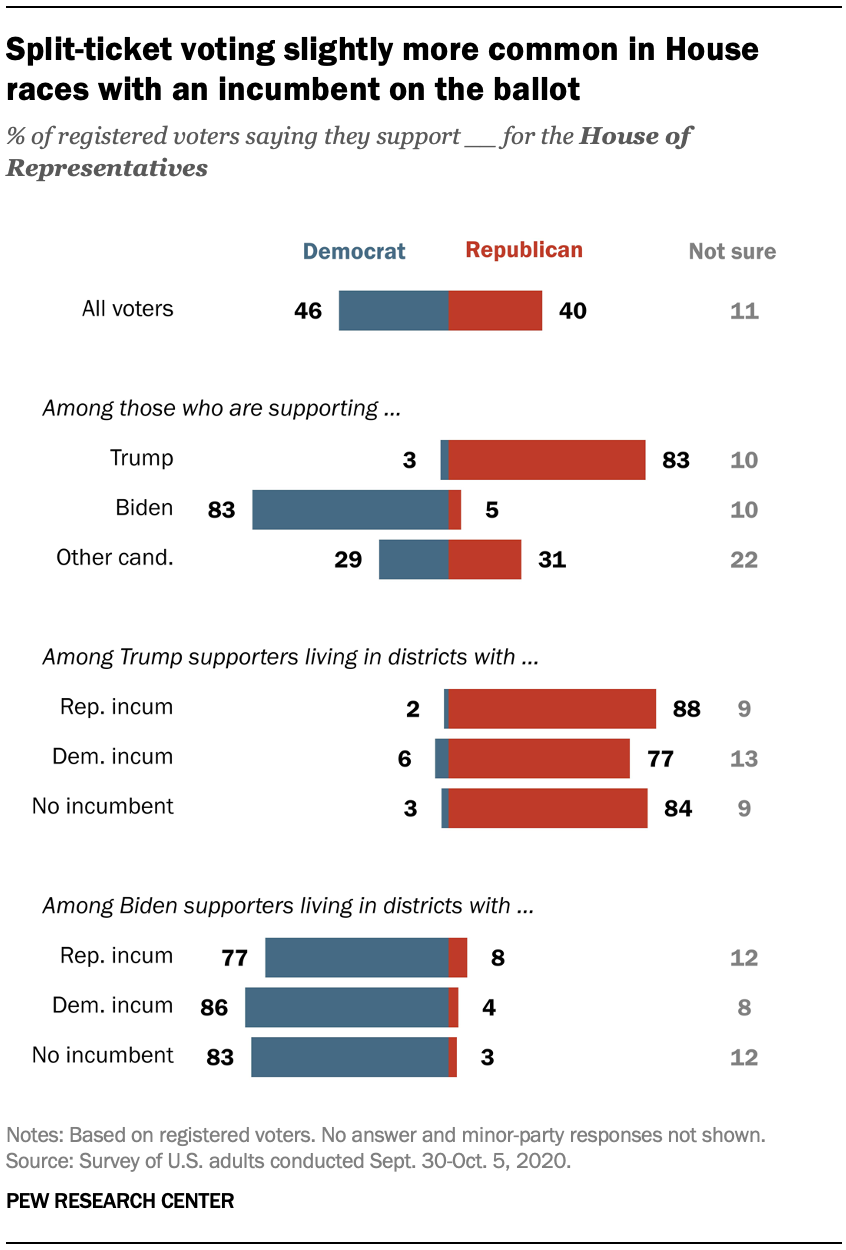 Among all registered voters, Democrats hold an edge in congressional elections, with 46% of voters saying they will vote (or have already voted) for the Democratic candidate in their district and 40% saying they support the Republican candidate. About one-in-ten voters (11%) are not sure whom they will support. 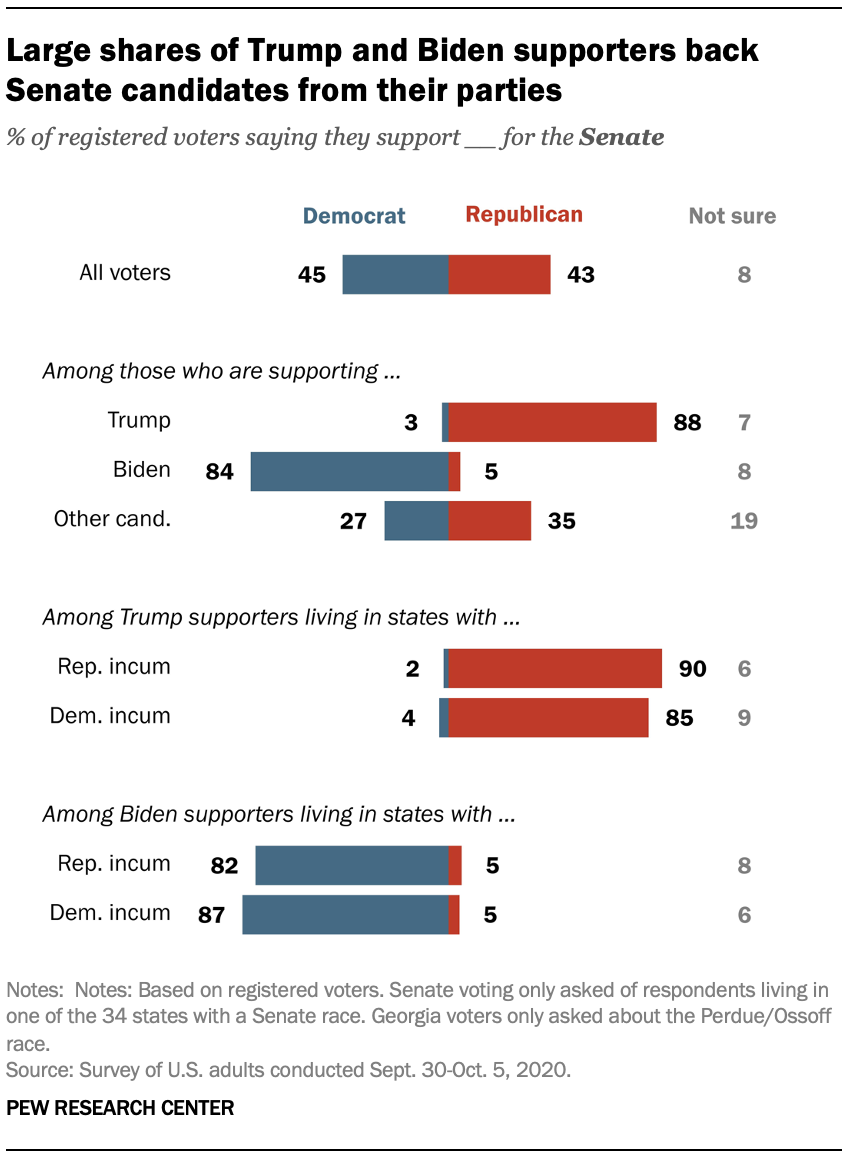 Overall in states where there is a Senate contest, support for Senate candidates is roughly evenly divided. The share of voters supporting the Democratic candidate (45%) in their state is similar to the share supporting the Republican candidate (43%), and 8% of voters say they aren’t sure at this point whom they will support.

Unlike in the House elections, there is less evidence that incumbency has any effect on split-ticket voting in these higher-profile Senate races.

Political Polarization in Action: Insights into the 2014 Election from the American Trends Panel
In Their Own Words: Why Voters Support – and Have Concerns About – Clinton and Trump
In Presidential Contest, Voters Say ‘Basic Facts,’ Not Just Policies, Are in Dispute
Little Partisan Agreement on the Pressing Problems Facing the U.S.
Election 2020: Voters Are Highly Engaged, but Nearly Half Expect To Have Difficulties Voting