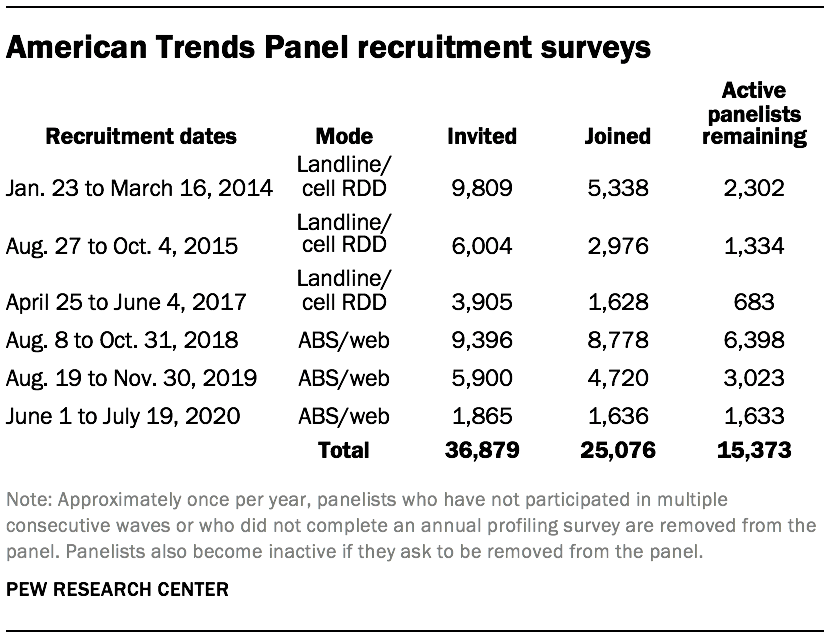 Data in the first part of this report is drawn from the panel wave conducted Aug. 31 to Sept. 7, 2020. A total of 9,220 panelists responded out of 9,810 who were sampled, for a response rate of 94%. This does not include two panelists who were removed from the data due to extremely high rates of refusal or straightlining. The cumulative response rate accounting for nonresponse to the recruitment surveys and attrition is 5%. The break-off rate among panelists who logged on to the survey and completed at least one item is 1%. The margin of sampling error for the full sample of 9,220 respondents is plus or minus 1.7 percentage points.

The ATP was created in 2014, with the first cohort of panelists invited to join the panel at the end of a large, national, landline and cellphone random-digit-dial (RDD) survey that was conducted in both English and Spanish. Two additional recruitments were conducted using the same method in 2015 and 2017, respectively. Across these three surveys, a total of 19,718 adults were invited to join the ATP, of which 9,942 agreed to participate. 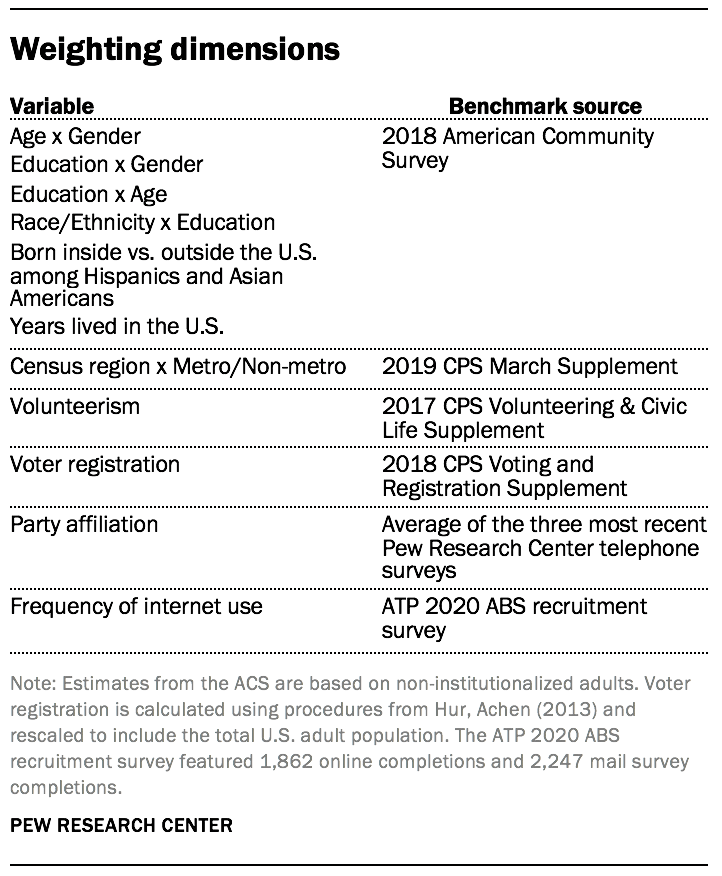 The analysis of Twitter use in this report is based on two surveys of U.S. adults ages 18 years and older. The first was a survey of Twitter users conducted from Nov. 21 to Dec. 17, 2018, by Ipsos in English using KnowledgePanel. The second was a nationally representative survey of U.S. adults (including both Twitter users and non-users) conducted from Oct. 29 to Nov. 11, 2019, on Pew Research Center’s American Trends Panel. This report focuses on the current day activity of 2,791 respondents from the KnowledgePanel survey and 1,345 respondents from the ATP survey who said they use Twitter, agreed to allow researchers to examine their Twitter behaviors, and provided a valid Twitter handle. The margin of sampling error for the combined sample of 4,136 Twitter users is plus or minus 2.4 percentage points.

The two surveys had different designs and eligibility criteria. For the KnowledgePanel survey, a total of 7,850 panelists who had previously indicated that they have a Twitter account were invited to participate. Of the 4,829 who responded, 3,649 (76%) confirmed that they used Twitter. Among confirmed Twitter users, 3,293 (90%) agreed to provide their Twitter handle. Next, researchers reviewed each account and removed any that were nonexistent or belonged to institutions, products or international entities. In the end, there were 2,791 respondents who both completed the survey and provided a valid handle (76% of confirmed Twitter users).

The ATP sample is comprised of adults who responded to ATP Wave 57. A total of 12,043 panelists responded out of 14,412 who were sampled, for a response rate of 84%.2 On this survey, a total of 2,561 (21%) stated that they used Twitter. Of these Twitter users, 1,517 (59%) agreed to provide their Twitter handle. Researchers reviewed each account in a similar manner as for the KnowledgePanel respondents. This yielded 1,345 Twitter users who agreed to participate in the study and provided a valid handle (53% of confirmed Twitter users).

The final sample of 4,136 Twitter users with valid handles was weighted in a multi-stage process. Both the KnowledgePanel and ATP samples begin with a base weight that reflects each respondent’s probability of selection into the sample. In the first step, a propensity adjustment was made to the ATP sample’s base weight so that the adjusted ATP sample more closely resembled the KnowledgePanel sample on gender, age, race, Hispanic ethnicity, education, region, party affiliation, volunteerism, voter registration, and metropolitan area. In addition to demographics, the propensity adjustment also balanced on whether panelists tweeted at least once between Oct. 28, 2019, and April 28, 2020, the number of tweets in that six month period, the number of followers, the number of accounts followed, and the number of tweets favorited per day. This was done to adjust for differences between the two samples in terms of the frequency of Twitter use that are likely attributable to differences in the design, timing and incentivization of the two surveys.

Next, the samples were combined and the weights were further adjusted using an iterative technique to match a set of benchmarks for gender, age, race, Hispanic ethnicity, education, region, party affiliation, volunteerism, voter registration, and metropolitan area. Because there are no official benchmarks for the population of Twitter users, population parameters were estimated using the set of respondents to ATP Wave 57 who indicated that they use Twitter (regardless of whether they agreed to provide their Twitter handle). For details on how the full Wave 57 sample was weighted see the survey methodology.

Respondents with valid accounts were loaded into a secure database. Researchers regularly collect and record the publicly available data from these accounts. This includes only profile description, number of tweets, and number of followers and followed accounts for users with protected accounts. This includes the tweets and the list of accounts followed by and following each user for accounts that are not protected. This study only includes data about users that do not protect their accounts, whose accounts are public.

Tweets and general profile data were collected daily, and the lists of followed and following accounts once a week. The weekly collection is staggered for the two sets of survey respondents to avoid hitting limits on querying the Twitter API.

The tweets analyzed in this study were produced between Nov. 11, 2019, and Sept. 14, 2020. The general profile information, such as number of followers, is from Sept. 14, 2020. Data about accounts followed by respondents to the ATP survey was collected between Sept. 6 and Sept. 7, 2020, and to the KnowledgePanel survey between Sept. 10 and Sept. 12, 2020. Monthly tweet frequency was estimated by multiplying the daily tweet count by 30 to approximate the monthly tweet total. Analyses of mentions and hashtags exclude retweets, but include original tweets, replies, and the original text on quote tweets. Mentions and hashtags are identified using a regular expression identifying the @ or # before the term, and transformed to lowercase before analysis. Hashtags less than two characters in length were excluded from analysis. In identifying the most followed accounts, center researchers were unable to identify a current twitter account associated with the twitter ID for two accounts. These accounts were dropped from the analysis.