Pew Research Center conducted this study to understand Americans’ political attitudes and their views of the coronavirus outbreak. For this analysis, we surveyed 4,917 U.S. adults in April 2020. Everyone who took part is a member of Pew Research Center’s American Trends Panel (ATP), an online survey panel that is recruited through national, random sampling of residential addresses. This way nearly all U.S. adults have a chance of selection. The survey is weighted to be representative of the U.S. adult population by gender, race, ethnicity, partisan affiliation, education and other categories. Read more about the ATP’s methodology. 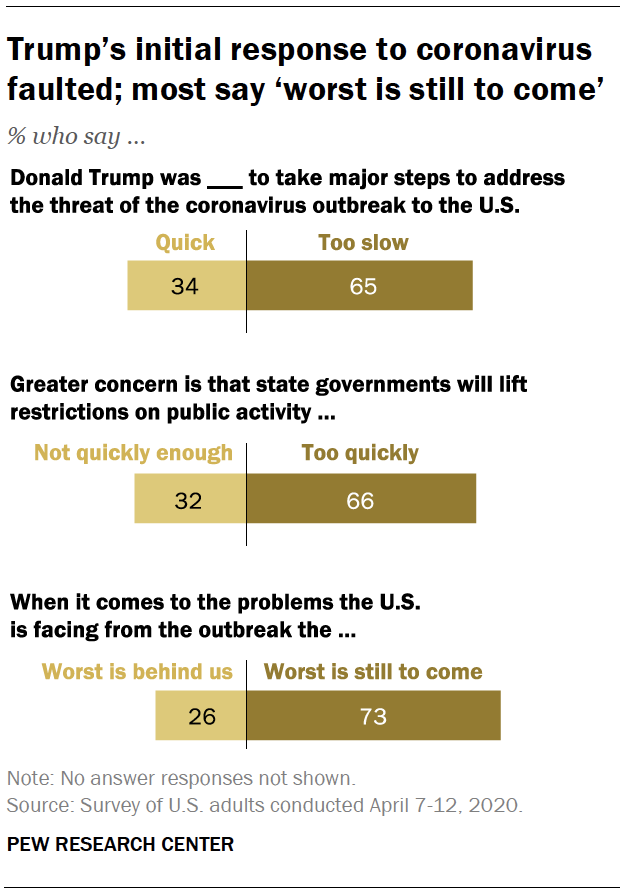 As the death toll from the novel coronavirus pandemic continues to spiral, most Americans do not foresee a quick end to the crisis. In fact, 73% of U.S. adults say that in thinking about the problems the country is facing from the coronavirus outbreak, the worst is still to come.

With the Trump administration and many state governors actively considering ways to revive the stalled U.S. economy, the public strikes a decidedly cautious note on easing strict limits on public activity. About twice as many Americans say their greater concern is that state governments will lift restrictions on public activity too quickly (66%) as say it will not happen quickly enough (32%).

President Donald Trump’s handling of the coronavirus outbreak – especially his response to initial reports of coronavirus cases overseas – is widely criticized. Nearly two-thirds of Americans (65%) say Trump was too slow to take major steps to address the threat to the United States when cases of the disease were first reported in other countries.

Opinions about Trump’s initial response to the coronavirus – as well as concerns about whether state governments will act too quickly or slowly in easing restrictions – are deeply divided along partisan lines. These attitudes stand in stark contrast to the assessments of how officials at the Centers for Disease Control and Prevention and at the state and local level are addressing the outbreak, which are largely positive among members of both parties.

Democrats are largely united in their concerns over state governments easing bans on public activity; 81% of Democrats and Democratic-leaning independents say their greater concern is that governments will lift these restrictions too quickly. Yet Republicans and Republican leaners are evenly divided. About half (51%) say their bigger concern is that state governments will act too quickly while slightly fewer (46%) worry more that restrictions on public movement will not be lifted quickly enough. 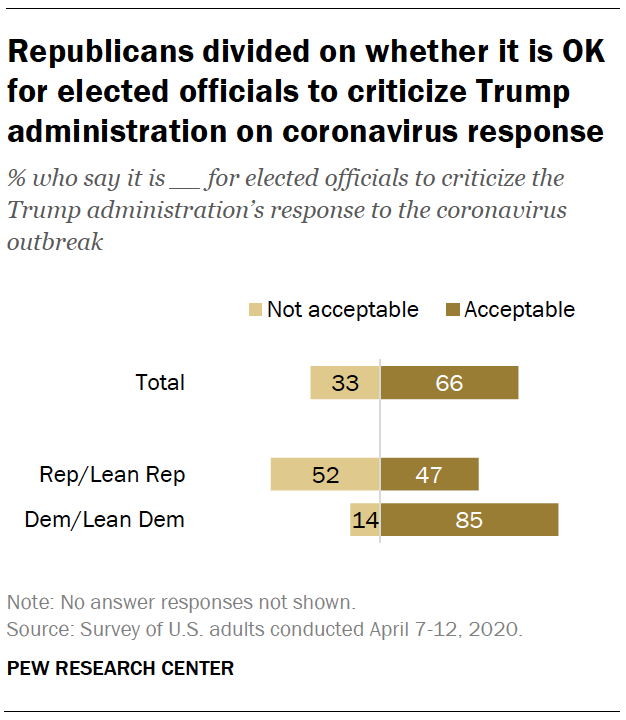 The new national survey by Pew Research Center, conducted April 7 to 12 among 4,917 U.S. adults on the American Trends Panel, finds that Republicans also are divided in opinions about whether it is acceptable for elected officials to criticize the Trump administration’s response to the coronavirus outbreak. 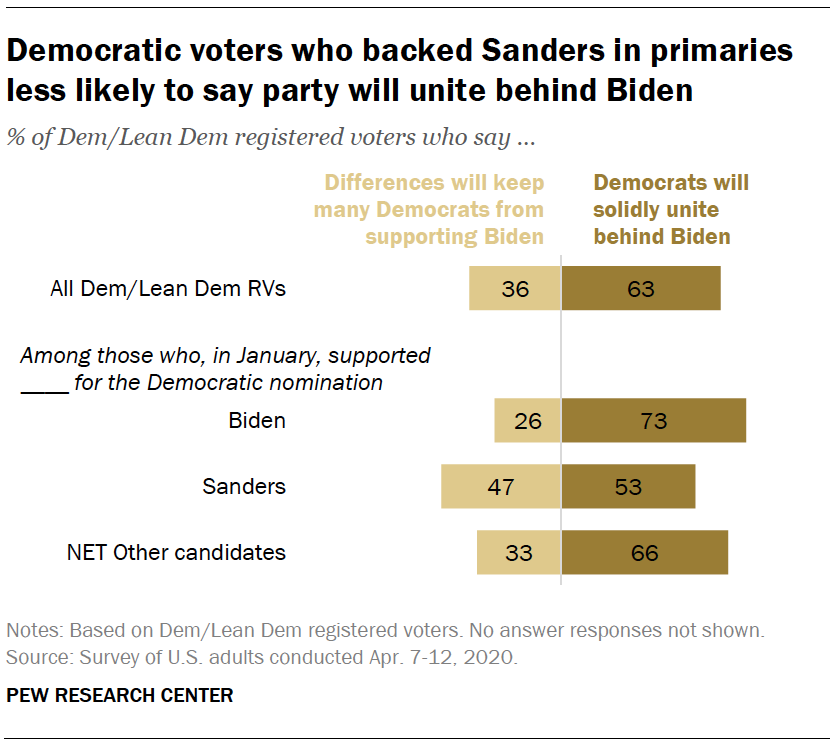 The survey finds that while Trump is widely viewed as having acted too slowly in the initial phase of the crisis, Americans have more positive views of how he is currently handling some aspects of the coronavirus outbreak. About half (51%) say he is doing an excellent or good job in addressing the economic needs of businesses facing financial difficulties.

However, fewer Americans say Trump has done well in addressing the financial needs of ordinary people who have lost jobs or income (46%), working with governors and meeting the needs of hospitals, doctors and nurses (45%). And 42% say Trump has done well providing the public with accurate information about the coronavirus. Public opinion about the coronavirus outbreak can be explored further by using the Election News Pathways data tool.

Trump’s overall job rating has changed little since late March (March 19-24); it remains among the highest ratings of his presidency. Currently, 44% approve of the way Trump is handling his job as president, while 53% disapprove.

The survey – most of which took place after Bernie Sanders announced April 8 that he was suspending his presidential campaign, but before he endorsed Biden on April 13 – finds that early preferences for the general election are closely divided: 47% of registered voters say if the presidential election were held today, they would vote for Biden or lean toward supporting Biden, while 45% support or lean toward Trump; 8% favor neither Biden nor Trump or prefer another candidate.

Here are the other major findings from the new survey:

Negative job ratings for Pelosi and McConnell. Just 36% of Americans approve of the way Nancy Pelosi is handling her job as speaker of the House, while an identical percentage approves of Mitch McConnell’s performance as Senate majority leader. Majorities disapprove of the job performance of Pelosi (61%) and McConnell (59%). Job ratings for both congressional leaders are deeply partisan. 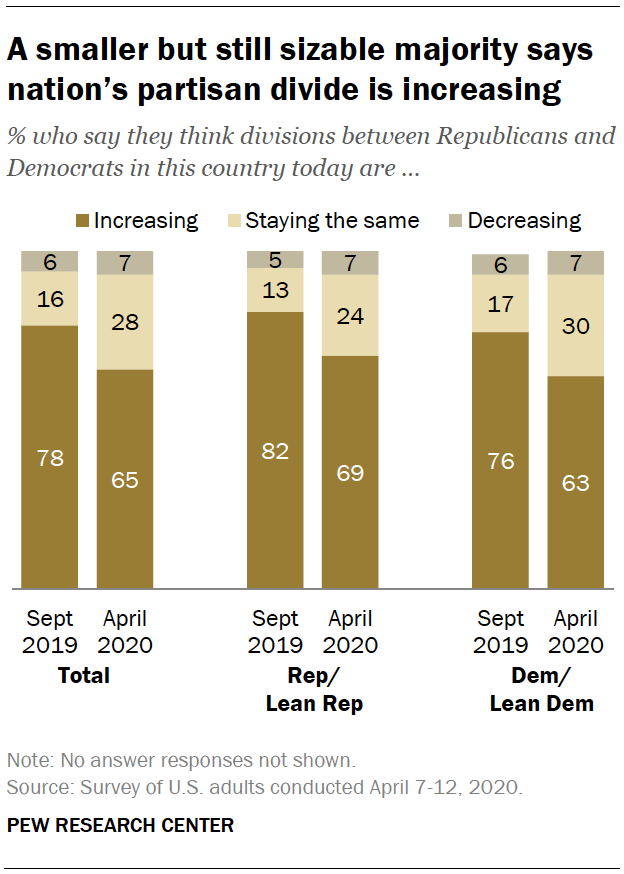 Majority sees increased partisan divisions, but fewer do so than last fall. The public has long believed that the nation’s partisan divisions have widened. But the share saying divisions between Republicans and Democrats, while large, has declined since last September. Currently, 65% say divisions between Republicans and Democrats in the U.S. are growing, compared with 78% who said this last fall.

Next: 1. Trump’s handling of coronavirus outbreak
← Prev Page
You are reading page1Page2Page3Page4Page5Page6
Next Page →

Most Americans Say Trump Was Too Slow in Initial Response to Coronavirus Threat
1. Trump’s handling of coronavirus outbreak 2. COVID-19 and the country’s trajectory 3. The 2020 election and Congress Methodology Appendix