The analysis of Twitter users in this report is based on a nationally representative survey conducted from Nov. 21 to Dec. 17, 2018, among a sample of 2,791 U.S. adults ages 18 years and older who have a Twitter account and agreed to allow researchers to follow and report on that account. This study examines only the subset of respondents (N=2,427) who had public-facing accounts; private accounts are excluded. The margin of error for the full sample is plus or minus 3.3 percentage points. 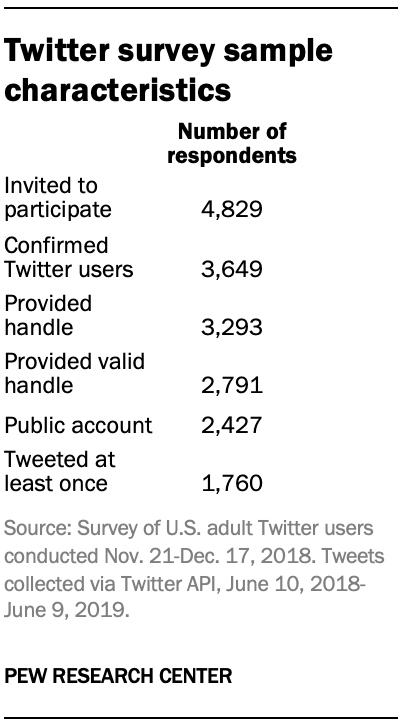 All active members of the Ipsos panel with an active Twitter account were eligible for inclusion in this study. In all, 4,829 panelists responded to the survey. Of that group, 3,649 (76%) confirmed that they used Twitter. Among confirmed Twitter users, 3,293 (90%) agreed to provide their Twitter username and complete the survey. Next, researchers reviewed each account and removed any that were nonexistent or belonged to institutions, products or international entities. Among the remaining 2,791 respondents who both completed the survey and provided a valid username (76% of confirmed Twitter users), 87% had public accounts. Of that set, 73% tweeted at least once during the time period of interest, a total of 1,760 individuals.

The complete sample of 2,791 adults was weighted using an iterative technique that matches gender, age, race, Hispanic origin, education, region, party identification, volunteerism, voter registration, and metropolitan area to the parameters of the American Trends Panel November 2018 survey of Twitter users. This weight is multiplied by an initial sampling, or base weight, that corrects for differences in the probability of selection of various segments of Ipsos’s sample as well as by a panel weight that adjusts for any biases due to nonresponse and noncoverage at the panel recruitment stage using all of the attributes described above.

Next, researchers developed a definition of the concept of interest: national politics. Through an iterative process, researchers arrived at the following classification instructions: Political tweets are “defined as tweets that mention, or express support or opposition toward: national politicians, political parties, ideological groups, or political institutions, as well as mentioning formal political behavior.”

Researchers also developed a list of keywords that were likely to occur in false positives (tweets that might appear to be about national politics, but that did not actually mention the topic). These terms included words like celeb, entertainment, food, gossip, leisure, movie and music, among others.

When training the classification model, researchers removed all tweets that contained both matches to the list of political keywords and matches to the list of false positive keywords. Researchers applied sampling weights to correct for changes in the sample’s representativeness that occurred as a result of this decision. Tweets that included words from the false positive list were included in the sample when making predictions and when evaluating the accuracy of the model.

Researchers estimated the model for an initial set of likely positive cases. Next, they applied a rule to override the model’s predictions based on the Twitter usernames (official, personal or campaign) of members of Congress, automated account usernames (which individuals can use to tag members of Congress), as well as the usernames belonging to President Donald Trump and former President Barack Obama. Any tweet that mentioned the username of a member of Congress, Trump or Obama met the definition of the concept described above and was automatically classified as a positive case.

The Twitter API limits how many tweets researchers can collect from individual accounts. Across the sample of users included in this study, the research team could not collect a complete timeline of tweets created between June 10, 2018, and June 9, 2019 for 2% of the sample (a total of 44 accounts). Even when excluding these accounts from the analysis, the results remain consistent.