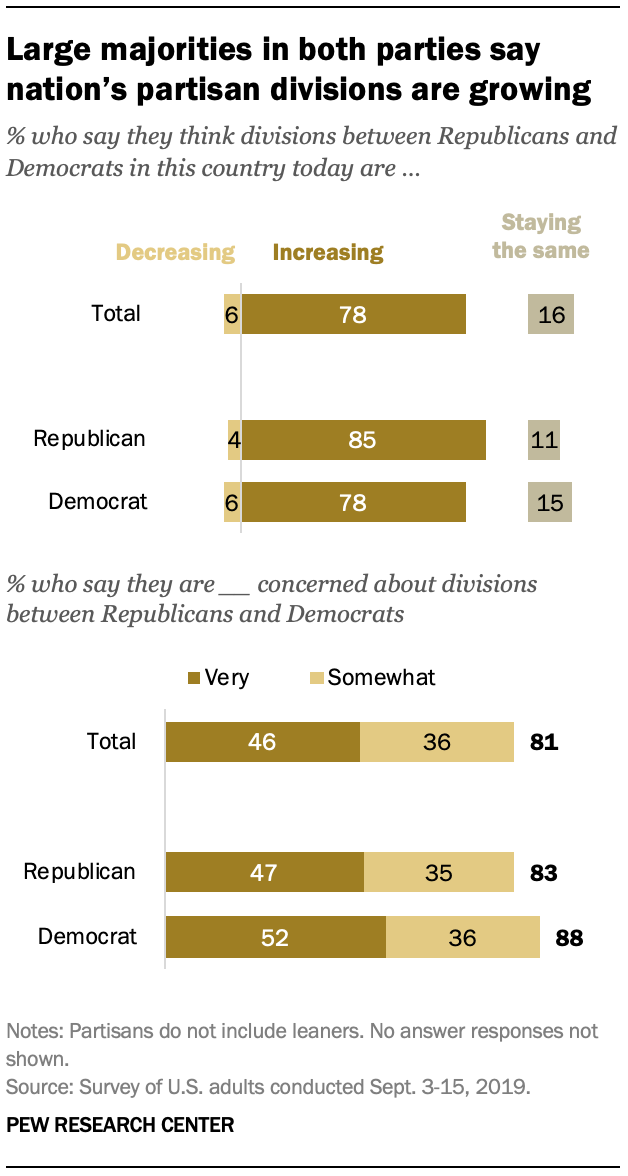 Republicans and Democrats agree on very little in the current political environment, but there is a widespread belief in both parties that partisan divisions in the country are increasing. Among the public overall, 78% say divisions between Republicans and Democrats in this country are increasing, while just 6% say they are decreasing and 16% say they are staying the same.

Large majorities in both parties say partisan divisions are increasing, though Republicans are somewhat more likely than Democrats to express this view (85% vs. 78%).

Comparable shares of Republicans and Democrats express concern about divisions between the two parties, though Democrats are slightly more likely to say this than Republicans (88% vs. 83%). 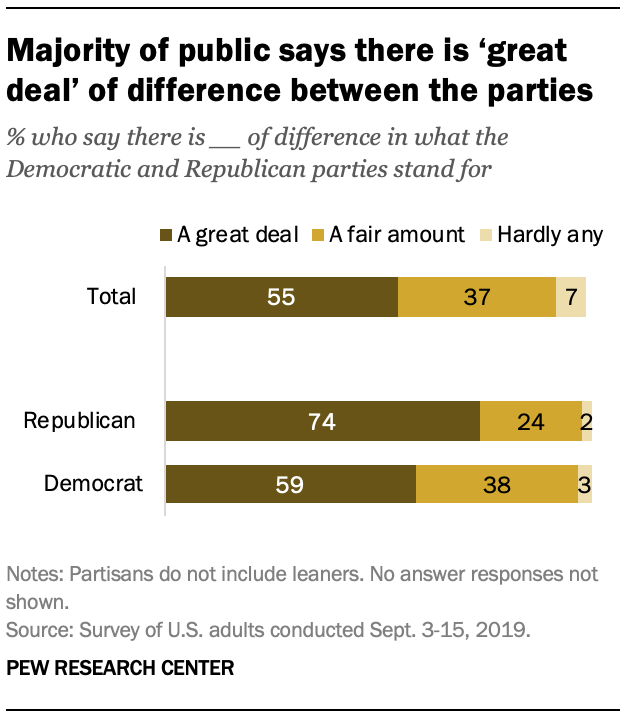 These opinions have changed dramatically over the past three decades. From the late 1980s through the mid-2000s, no more than about a third of Americans said there were major differences between the two parties. But the share expressing this view has increased, especially over the past decade.1

In the current survey, Republicans are more likely than Democrats to say there are major differences in what the parties stand for (74% of Republicans vs. 59% of Democrats).

In both parties, people who are attentive to politics on a regular basis are more likely than those who are less attentive to see wide, growing divides in the country.

Most Republicans who say they follow what is happening in government and public affairs most of the time perceive a great deal of difference in what the Democratic and Republican parties stand for (85%). Among Republicans who follow government and public affairs less often, a smaller majority (65%) says there are major differences between the parties. Among Democrats, there is a similar gap in views by engagement; 70% of politically attentive Democrats see a wide gulf between the parties, while just 49% of less-attentive Democrats say the same. 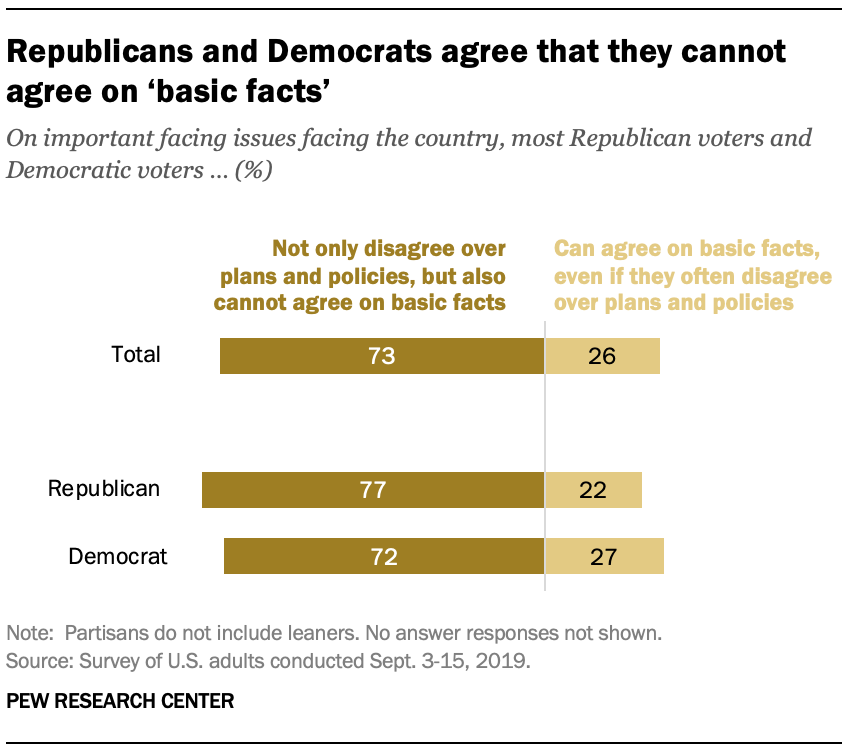 Does the other party have any good ideas?

Most Republicans and Democrats believe that few – or no – good ideas come from the other party. Only 17% of Republicans say that the Democratic Party has “a lot” or “some” good ideas” and only 13% of Democrats say this about the Republican Party. In fact, nearly half in both parties say the other has almost no good ideas. 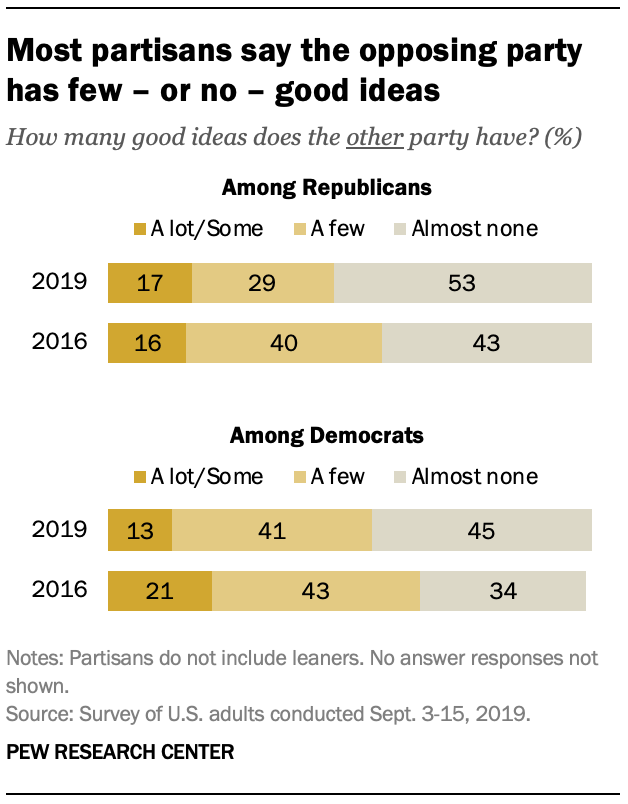 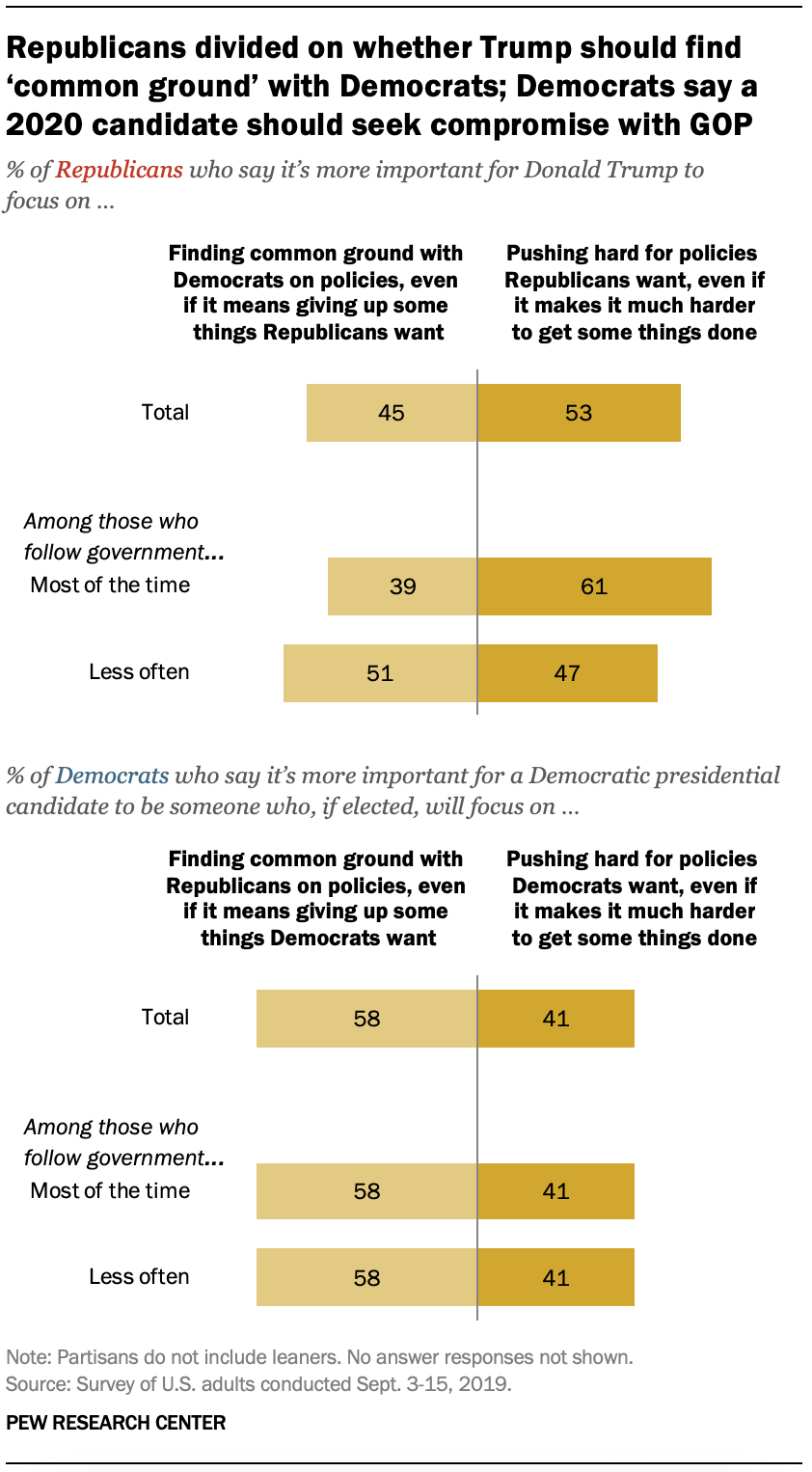 Democrats, who were asked a hypothetical version of the question about the party’s 2020 presidential candidates, are more open to potential compromise with Republicans. About six-in-ten Democrats (58%) say it is more important for a candidate, if elected, to find common ground with Republicans even if it means giving up things Democrats want.

There are no differences in these views among Democrats based on political attentiveness. But liberal Democrats (54%) are less likely than conservative and moderate Democrats (62%) to say it is more important for a candidate to seek compromises with Republicans.

There is an even sharper ideological divide among Republicans in views of whether Trump should make compromises. Just 39% of conservative Republicans say Trump should find common ground with Democrats if it means giving up things Republicans want; about two-thirds of GOP moderates and liberals (63%) say the same.

Views of the parties’ traits and characteristics 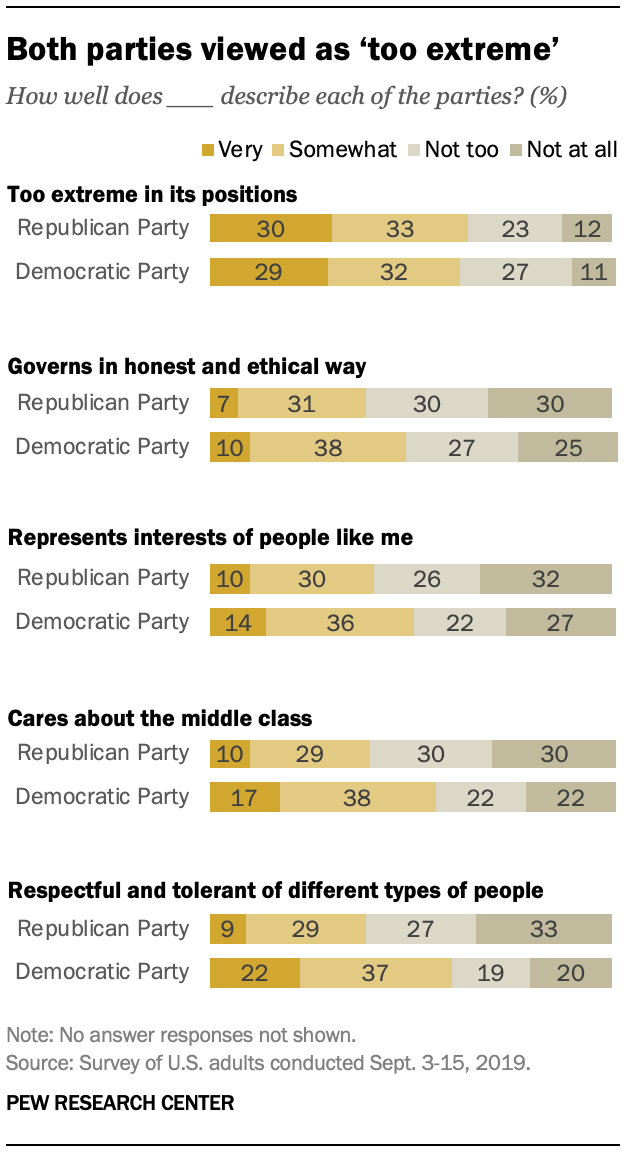 The public also is critical of the parties ability to govern honestly and ethically: Just 38% say the phrase “governs in an honest and ethical way” describes the Republican Party at least somewhat well, while 61% say it does not. Roughly half (47%) say this describes the Democratic Party at least somewhat well, while about as many (52%) say it doesn’t.

The public views the Democratic Party more positively than the Republican Party on three other traits and characteristics. Four-in-ten (40%) say that the phrase “represents the interests of people like me” applies at least somewhat well to the Republican Party, while half (50%) say this phrase describes the Democratic Party at least somewhat well.

A majority (55%) says the description “cares about the middle class” describes the Democratic Party at least somewhat well. By comparison, 39% say that it applies to the Republican Party.

The widest gap in opinion across the items included in the survey is over whether the two parties are “respectful and tolerant of different types of people.” Six-in-ten (60%) say this phrase describes the Democratic Party at least somewhat well; 38% say it describes the Republican Party somewhat or very well.

Large majorities of Republicans and Democrats assign positive characteristics to their own party, while taking a much more negative view of the opposing party. 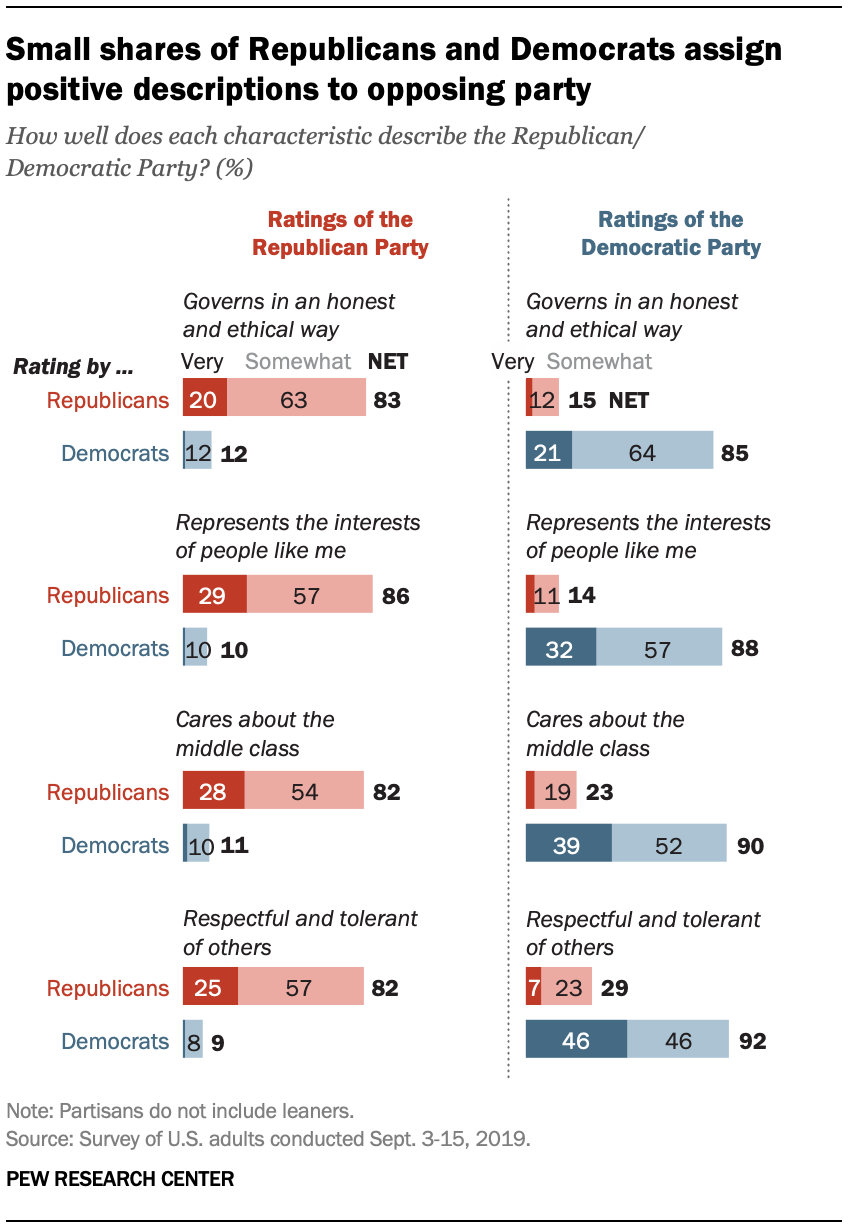 There is a similar pattern on views of how respectful and tolerant the parties are of different types of people. A larger majority of Democrats (92%) than Republicans (82%) describe their own party this way. And out-party assessments – while low among both sets of partisans – are more positive among Republicans than Democrats. 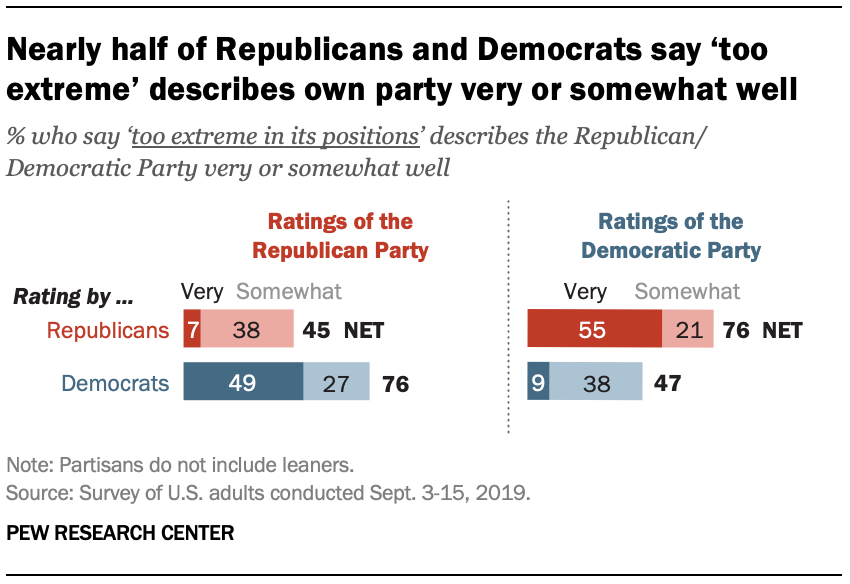 On this measure, there is little difference between partisan leaners and identifiers. Similar majorities of those who identify with a party and those who lean toward a party view the other side as too extreme in its positions.

Across the positive traits included in the survey – such as governing in an honest and ethical way – smaller majorities of partisan leaners than identifiers take a positive view of the party they associate with.

Next: 2. How partisans view each other
← Prev Page
Page1You are reading page2Page3Page4
Next Page →

Partisan Antipathy: More Intense, More Personal
1. The partisan landscape and views of the parties
Growing share of Americans say there are major differences in what the parties stand forMost Americans say partisan disagreements extend beyond policies to ‘basic facts’Does the other party have any good ideas?Republicans and Democrats have different views about compromising with the other partyViews of the parties’ traits and characteristics
2. How partisans view each other Methodology

House Freedom Caucus on Twitter: Going negative and getting attention

Freedom Caucus likely to play a bigger role in new GOP-led House. So who are they?