With a large slate of candidates to choose from and the first primary votes still more than six months off, Democratic voters express relatively high levels of satisfaction with the Democratic presidential candidates as a group. 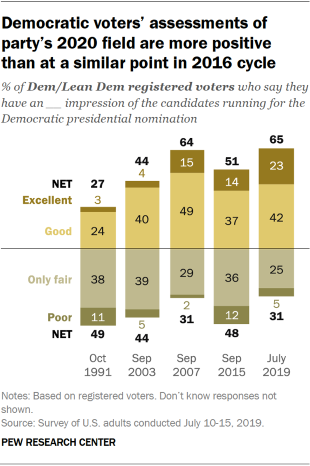 The election also is attracting more attention and interest than past elections did at similar points in the cycle, with about half of voters saying they have given a lot of thought about the presidential candidates – higher than at this point in the 2008, 2012 or 2016 elections.

And among the general public, a record share says they have been closely following news about the 2020 candidates – more so than in any of the previous eight election cycles.

Today, roughly two-thirds of Democratic and Democratic-leaning registered voters (65%) say they have an excellent (23%) or good (42%) impression of the Democratic presidential candidates as a group. By comparison, in September 2015, only about half of Democratic voters (51%) said the same.

The current positive evaluations of the 2020 field are roughly on par with levels expressed at a similar point in the 2008 election cycle, when 64% of Democratic voters said they had a positive impression of the field. 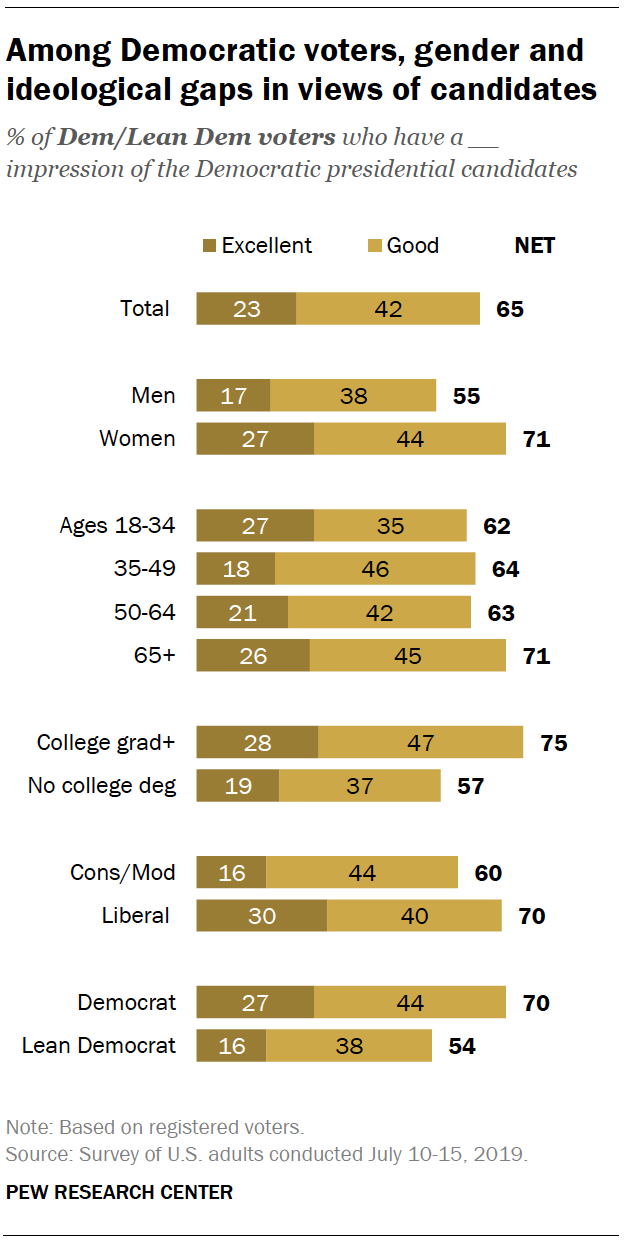 Among Democratic and Democratic-leaning registered voters, about seven-in-ten women (71%) say they have an excellent or good impression of the Democratic candidates as a group, while a smaller share of men (55%) say the same.

Liberal Democratic voters are more likely than conservatives and moderates to say they have a positive impression of the candidates (70% vs. 60%).

And while 70% of Democratic identifiers express positive views of the field of candidates for the party’s nomination, a narrower majority (54%) of those who lean toward the Democratic Party say this. 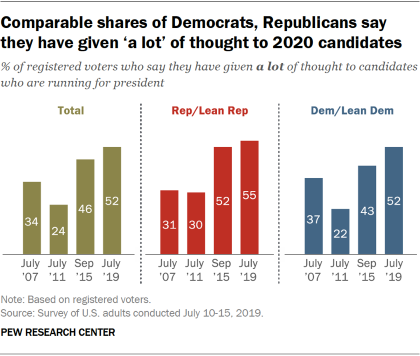 Today, about half of voters (52%) say they have given a lot of thought about the presidential candidates – the highest share at this early point in an election cycle since the question was first asked in the run-up to the 2008 election.

Similar majorities of both Republican and Democratic voters say they have given a lot of thought to the 2020 candidates running for president (55% and 52%, respectively).

Among registered Democratic and Democratic-leaning voters, the shares who say they have given a lot of thought to the candidates is higher than the shares who said this at similar points in the previous three election cycles. Today, about half of Democratic voters say this (52%), compared with smaller shares in 2015 (43%), 2011 (22%) and 2007 (37%).

Republican voters are about as likely to say they’ve thought about the 2020 candidates as they were in September 2015 – when there were over 15 candidates running for the GOP presidential nomination.

There are only modest gender or age differences in the amount of thought given to the upcoming election. However, as in past elections, college graduates are more likely than those without a college degree to say they have given a lot of thought to the election.

More ideological partisans are also more likely to say they are paying a lot of attention to the candidates: 63% of conservative Republican and Republican-leaning voters say they have given a lot of thought to the 2020 candidates, compared with just 55% of Republican voters overall.

Attention to the presidential election at this point in the cycle is also at a historic high in Pew Research Center surveys dating back more than three decades. Today, 63% of all U.S. adults say they have been following news about candidates for the 2020 presidential election very or fairly closely. This is 9 points higher than in August of 2015, and 10 or more points higher than similar points for all elections dating back to when this question was first asked in 1987. 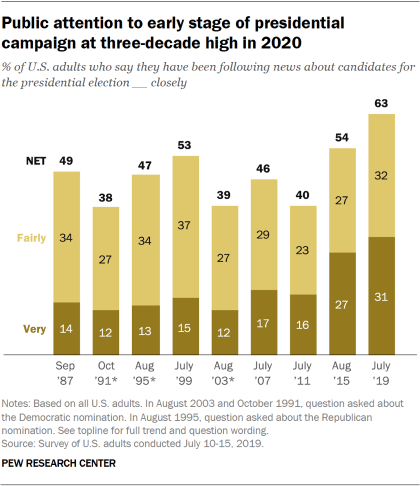 But the 2020 election cycle is the first in which a majority of adults say they are paying at least fairly close attention to the election cycle, despite there being an incumbent president seeking reelection.

Both Republicans and Democrats report higher interest in news about the candidates relative to previous elections. 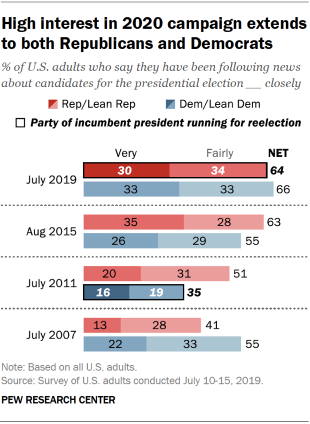 Early interest in the presidential cycle among Democrats and Democratic-leaning adults is at a record high. About two-thirds (66%) say they have been following news about candidates very or fairly closely, higher than the shares who said this at comparable points in the elections of 2016 (55%), 2012 (35%) and 2008 (55%).

But even as Democrats register historic interest in the election, Republicans also report that they are closely following news about candidates.

Among Republican and Republican-leaning adults, 64% say they have been following news about the candidates very or fairly closely – much higher than the share of Democrats who reported this in July 2011 (35%), when Barack Obama was seeking a second term in office. This is also roughly similar to the share who said this in August 2015 (63%) or July 2011 (51%).

Likely Rise in Voter Turnout Bodes Well for Democrats
So far, Trump has granted clemency less frequently than any president in modern history
Biden Begins Presidency With Positive Ratings; Trump Departs With Lowest-Ever Job Mark
Quiz: Where do you fit in the political typology?
Intent to Get a COVID-19 Vaccine Rises to 60% as Confidence in Research and Development Process Increases
What the 2020 electorate looks like by party, race and ethnicity, age, education and religion