The public is generally positive about the outcome of last week’s midterm elections. Yet most Americans think that neither Democratic congressional leaders nor Donald Trump will be successful in getting their policies passed into law during the next two years. 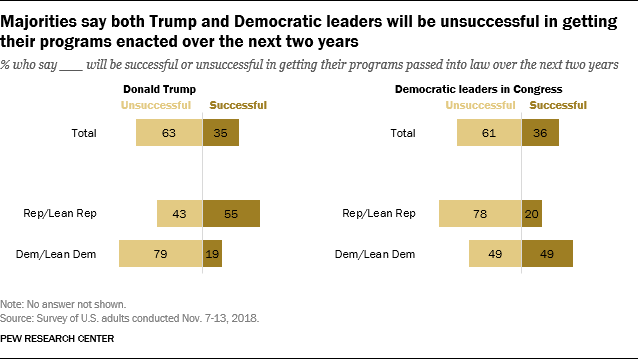 While the Democratic Party gained a majority in the House, but not the Senate, in the Nov. 6 elections, Democrats are divided over the party’s legislative prospects: 49% of Democrats and Democratic-leaning independents say Democratic leaders will be successful, while an identical share says they won’t. Republicans and Republican leaners are somewhat more positive about Trump’s prospects, with 55% saying he will be successful in getting his programs into law. 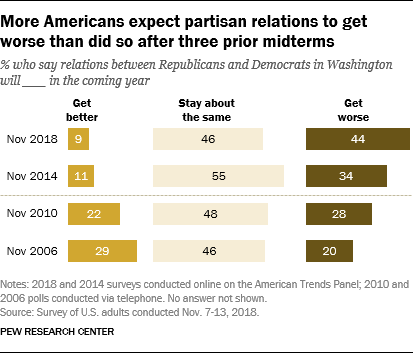 The public’s pessimism about partisan relations in Washington is now higher than it was after the three prior midterm elections.

More than four-in-ten (44%) expect relations between Republicans and Democrats in Washington will get worse in the coming year. In 2014, after the GOP won full control of Congress, 34% said partisan relations would worsen and in 2006, after Democrats won majorities in the House and Senate, just 20% expressed this view.

(Note: This is the first time the full post-election survey has been conducted on Pew Research Center’s nationally representative American Trends Panel. Prior to 2018, the survey was conducted by telephone. The current survey is comparable to past surveys, though asking questions online can elicit somewhat different response patterns, including lower shares expressing no response on web surveys.)

Results for the 2018 post-election report are based on surveys conducted through Pew Research Center’s American Trends Panel – a probability-based, nationally representative panel of U.S. adults administered online. Many of the trends presented in this report, however, draw upon surveys that were conducted by telephone.

Results from self-administered (online) and interviewer-administered (telephone) surveys are sometimes different – even when questions are worded the same. This difference is called a mode effect, which is a difference in responses to a survey question attributable to the mode in which the question is administered.

Though research suggests that mode effects do not usually result in very large differences in responses, they may account for some of the differences in results. A common mode effect is that online surveys, compared with interviewer-administered surveys, tend to find a lower incidence of item nonresponse (e.g., fewer “don’t know” responses) when an explicit “don’t know” or “no opinion” option is not offered.

Findings in this report that draw upon trend data from telephone surveys will be clearly labeled in footnotes and the topline. For more information about mode effects, click here. 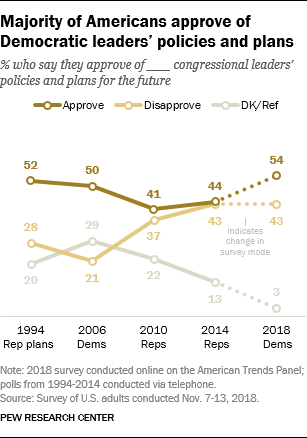 After the Democrats’ victory in the House, the public approves of Democratic leaders’ plans and policies for the future – and prefers the Democrats’ approach to Trump’s on most specific issues, including the environment, health care and immigration.

When a separate group of respondents was given the option of whether both Trump and Democrat leaders should take the lead, a 54% majority say they should. Among the remainder, more say Democratic leaders (28%) than Trump (17%) should take the lead in addressing national problems. 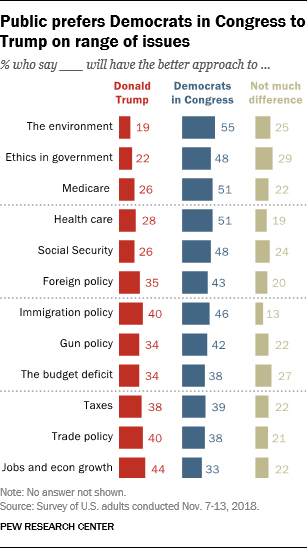 Congressional Democrats hold especially wide leads over Trump – of at least 20 percentage points – on their approaches to the environment, ethics in government, Medicare, health care and Social Security. The Democrats are preferred by smaller margins on foreign policy, immigration policy and gun policy.

Mixed reactions to the 2018 midterms 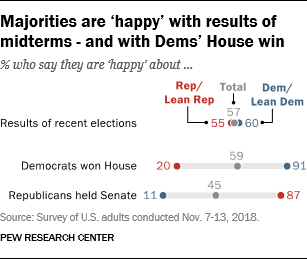 A majority of Americans – including majorities in both parties – found something to like about the overall results of the congressional elections. Nearly six-in-ten (57%) say they are happy with the results of recent elections across the U.S.; 41% say they are unhappy.

Notably, nearly as many Republicans (55%) as Democrats (60%) say they are happy with the results of the elections.

Yet partisans express very different views of results of the elections for the House and Senate. Overall, 59% of Americans are happy the Democrats won the House, while 38% are unhappy. By contrast, somewhat more are unhappy (52%) than happy (45%) that Republicans maintained control of the Senate.

A record number of women will serve in the 116th Congress 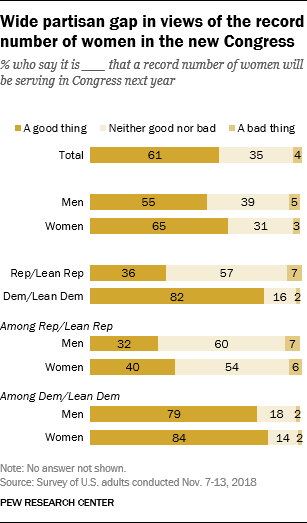 when it convenes early next year, according to the Center for American Women and Politics (CAWP), a unit of the Eagleton Institute of Politics at Rutgers University. A majority of Americans (61%) say this will be a good thing; just 4% say it will be a bad thing, while 35% say it will be neither good nor bad.

As previous Pew Research Center surveys have shown, the partisan differences in views of women and leadership are wider than gender differences in these opinions. More than twice as many Democrats (82%) as Republicans (36%) say the record number of women who will serve in the 116th Congress – most of whom are Democrats – is a good thing. The gender gap is much more modest; 65% of women and 55% of men say the highest-ever number of women in Congress is a good thing. 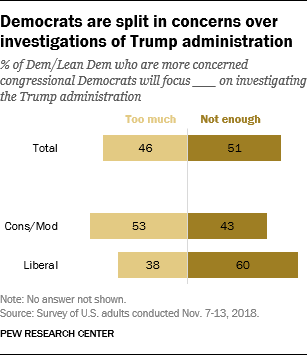 Liberal Democrats (60%) are more likely than conservative and moderate Democrats (43%) to say their greater concern is that congressional Democrats will focus too little on investigations of Trump and his administration.

Next: 1. The public’s post-midterm outlook
← Prev Page
You are reading page1Page2Page3Page4Page5Page6Page7
Next Page →

Public Expects Gridlock, Deeper Divisions With Changed Political Landscape
Trends and mode changesMixed reactions to the 2018 midtermsOther major findings
1. The public’s post-midterm outlook 2. Reactions to the midterm elections 3. Confidence in vote count and election administration 4. Trump, the 2018 election and beyond 5. Views on whether Trump or Democrats have a better approach on issues Methodology