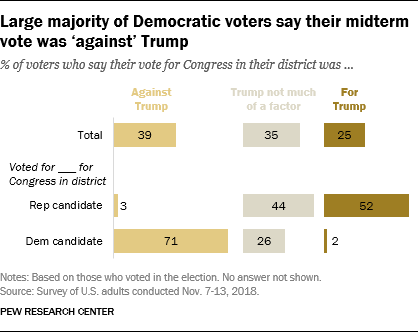 Nearly two-thirds of those who say they voted in the midterm elections (64%) say Trump was a consideration in their vote, while 35% say the president was not much of a factor. Overall, 39% say their vote was a vote against Trump, while fewer (25%) say their choice was a vote for Trump.

These views are similar to those expressed in a survey conducted before the election: In September, 60% of registered voters said they viewed their vote as either a vote against Trump (37%) or for him (23%).

Among those who reported voting for Democratic candidates, 71% characterize their vote as a vote against Trump, while about a quarter (26%) say he was not a factor.

Among those who voted for GOP congressional candidates, about half (52%) say their vote for Congress was a vote in support of Trump, while 44% say he was not a factor. 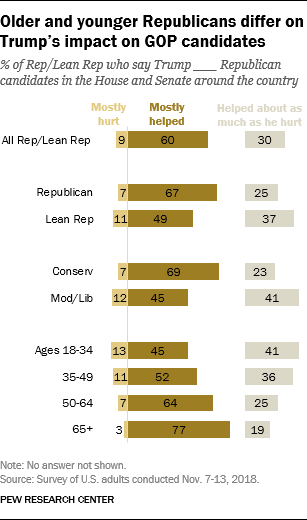 A majority of Republicans and Republican leaners (60%) say Trump mostly helped Republican candidates in the House and Senate around the country. Three-in-ten said Trump helped about as much as he hurt, while 9% say he mostly hurt GOP candidates.

Older Republicans are significantly more likely than younger Republicans to see Trump’s impact on GOP candidates as beneficial. Majorities of Republicans ages 65 and older (77%) and 50 to 64 (64%) say Trump mostly helped Republican candidates. About half of those ages 35 to 49 (52%) say he mostly helped, while 36% say he helped as much as he hurt.

Republicans under 35 (45%) are far less likely to say Trump’s impact on candidates was mostly helpful. About four-in-ten say Trump had a mixed (41%) effect, and 13% say he did more to hurt Republican congressional candidates around the country.

Majority of Republicans oppose GOP challenge to Trump in 2020 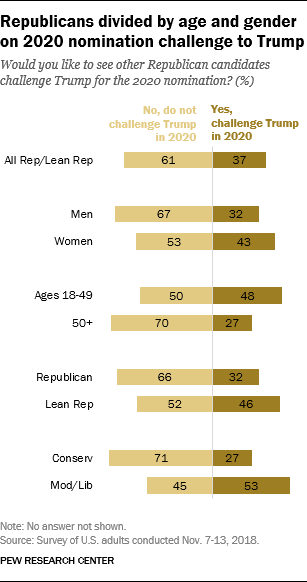 This is roughly on par with views of Obama among Democrats after the 2010 midterm elections, when the party lost its majority in the House of Representatives.

Currently, there are large differences among Republicans by gender and age when it comes to a potential GOP challenger to Trump in 2020.

Republicans ages 50 and older are considerably more likely than those under 50 to say Trump should not be challenged in 2020. Seven-in-ten of those over 50 say this, compared with just half of Republicans under 50.

And while a majority of conservative Republicans (71%) say they would not like a candidate to challenge Trump, far fewer moderate and liberal Republicans (45%) say the same. 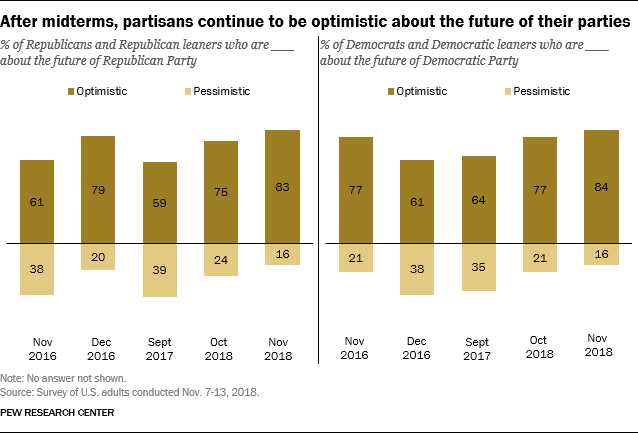 Next: 5. Views on whether Trump or Democrats have a better approach on issues
← Prev Page
Page1Page2Page3Page4You are reading page5Page6Page7
Next Page →

Public Expects Gridlock, Deeper Divisions With Changed Political Landscape 1. The public’s post-midterm outlook 2. Reactions to the midterm elections 3. Confidence in vote count and election administration
4. Trump, the 2018 election and beyond
Republicans say Trump ‘mostly helped’ GOP congressional candidatesMajority of Republicans oppose GOP challenge to Trump in 2020Both Republicans and Democrats continue to be optimistic about the future of their parties
5. Views on whether Trump or Democrats have a better approach on issues Methodology