A majority of Americans say 2018 will be a better year than 2017, a shift from a year ago when public expectations were far less positive. The change has been driven almost entirely by Democrats, who are more likely than Republicans to cite this fall’s midterm elections as a reason for optimism. And significantly more Democrats than Republicans say they are “looking forward” to the elections.

Donald Trump begins the year with a job approval rating of 37%, which is little different from his rating shortly after his inauguration last year (39%). Large majorities continue to view Trump negatively on such traits as being trustworthy, well-informed, empathetic and even-tempered.

As was the case last year, one of Trump’s stronger traits is his ability to get things done; 50% say he is able to do this. But on what had been his most positive characteristic a year ago – keeping his promises – Trump is now viewed more critically. Just 39% say Trump keeps his promises, down from 60% last February. The decline has come among members of both parties, though Republicans continue to be much more likely than Democrats to say Trump keeps his promises.

Among the 29% of Americans (mostly Democrats) who say 2018 will be worse than 2017, Trump figures prominently among the reasons for their negative expectations. Roughly half (46%) point to Trump or his policies as why they think this year will be worse than last year; no other response comes close (11% cite Republican policies). 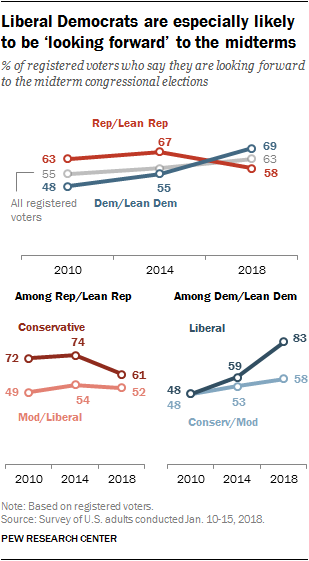 At the start of the election year, Democratic registered voters, are more likely than Republican voters to say they are looking forward to the midterms – a shift from the past two midterm elections.

Currently, 69% of Democratic registered voters say they are looking forward to the midterms, compared with 58% of Republicans. At this point in 2014, Republicans were 12-percentage points more likely than Democrats to say they were anticipating the election and the gap was comparable early in 2010 (15 points).

As other national surveys have found, Democrats have an early advantage in voting preferences for the midterm elections: 53%of registered voters say if the election were held now, they would vote for the Democrat in their House district or lean toward the Democrat, while 39% favor the Republican or lean Republican. 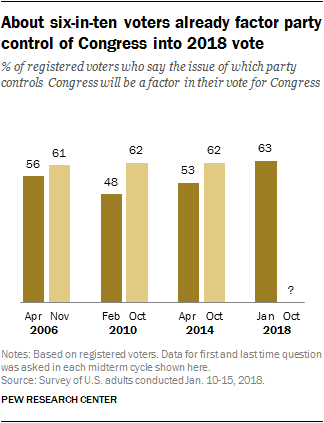 With the election about 10 months away, a majority of registered voters (63%) say the issue of which party controls Congress will be a factor in their vote this year. This is a greater percentage than said this at early points in the 2014, 2010 and 2006 midterm cycles. The share saying partisan control of Congress will matter in their vote is now about as high as it was in the closing weeks of those elections.

Majorities of both Democratic (68%) and Republican voters (62%) say the issue of which party controls Congress will be a factor in their vote in the midterms. Democrats, in particular, are more likely to view partisan control as important than at roughly this point or later in the past three midterm elections.

Little confidence in Trump on issues. As in the past, Trump does not draw a great deal of confidence for his ability to handle many major issues. About half (46%) say they are very or somewhat confident that Trump will make good decisions on economic policy (51% are not too confident or not at all confident). About as many Americans (44%) say they are at least somewhat confident in Trump to work effectively with Congress, while fewer express confidence in Trump on immigration policy (38%) and in his ability to handle an international crisis (35%). 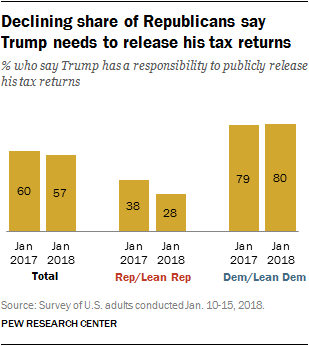 Next: 1. Trump at year one: Job approval, confidence on issues, personal traits
← Prev Page
You are reading page1Page2Page3Page4Page5
Next Page →

Most Voters Have Positive Views of Their Midterm Voting Experiences

In midterm voting decisions, policies took a back seat to partisanship