The analyses in this report depend upon six separate surveys (fielded in March, August and December 2015 and March, April and June 2016). The data for 5,544 panelists who completed any of these six waves were weighted to be nationally representative of U.S. adults. In this report, results for December 2015 and later are based on all 2,079 Republican and Republican-leaning registered voters who responded to any of these six waves. Results for March and August 2015 are based on the 1,345 Republican and Republican-leaning registered voters who were members of the ATP at the time.

The ATP data were weighted in a multi-step process that begins with a base weight incorporating the respondents’ original survey selection probability and the fact that in 2014 some panelists were subsampled for invitation to the panel. Next, an adjustment was made for the fact that the propensity to join the panel and remain an active panelist varied across different groups in the sample. The third step in the weighting uses an iterative technique that matches gender, age, education, race, Hispanic origin and region to parameters from the U.S. Census Bureau’s 2014 American Community Survey. Population density is weighted to match the 2010 U.S. Decennial Census. Telephone service is weighted to estimates of telephone coverage for 2016 that were projected from the January-June 2015 National Health Interview Survey. Volunteerism is weighted to match the 2013 Current Population Survey Volunteer Supplement. It also adjusts for party affiliation using an average of the three most recent Pew Research Center general public telephone surveys. Internet access is adjusted using a measure from the 2015 Survey on Government. Frequency of internet use is weighted to an estimate of daily internet use projected to 2016 from the 2013 Current Population Survey Computer and Internet Use Supplement. As a final step, the data for the 3,472 the March/August panelists were poststratified so that the distribution of voter preferences for December 2016 matches the distribution for full set of 5,544 respondents.

Panelists who did not respond to all of the surveys used in this report are missing data for their vote preference for waves in which they did not participate. These missing values were imputed using the process described below.

Sampling errors and statistical tests of significance take into account the effects of both weighting and imputation. Interviews are conducted in both English and Spanish, but the Hispanic sample in the American Trends Panel is predominantly native born and English speaking.

The following table shows the error attributable to sampling, weighting and imputation that would be expected at the 95% level of confidence for different groups in the analysis. The margins of error shown reflect the largest margin of error for any of the shifts in support to or from each candidate at each point in time: 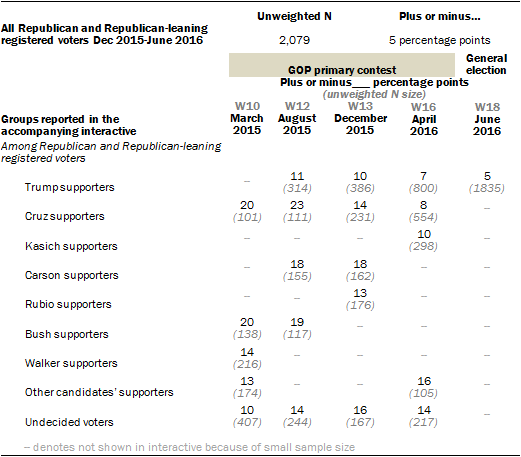 The American Trends Panel is composed of individuals who were recruited from two large, representative telephone surveys originally fielded in early 2014 and late 2015. Participants in the panel are sent surveys to complete about monthly. While wave-level response rates are relatively high, not every individual in the panel participates in every survey. The analyses in this report are based on six surveys (fielded in March, August, and December 2015 and March, April, and June 2016).

Of the more than 5,500 respondents who participated in at least one of the waves in which we collected primary vote preference, several hundred respondents (between 12 and 15 percent) did not participate in any given wave. A statistical procedure called hot deck imputation was used to guard against the analysis being undermined by this wave level nonresponse. In particular, there is some evidence that those who are most likely to participate consistently in the panel are more interested and knowledgeable about politics than those who only periodically respond. Omitting the individuals who did not participate in every wave of the survey might overstate the amount of stability in individuals’ preferences.

The particular missing data imputation algorithm we used is known as “hot deck” imputation. This algorithm identifies individuals who are very similar to those with missing data and sampling from the similar observed cases to fill in responses for the missing cases. For each case where the vote preference is missing, the algorithm searches for other cases that are similar along several dimensions (demographic: sex, age, race/ethnicity; socioeconomic: education; political attitudinal: partisan identity, ideological consistency, interest in politics, political knowledge; and geographic: census region, urban/suburban/rural; primary preference in other waves). After identifying a small set of similar individuals the algorithm selects one at random to serve as a “donor,” and fills in the missing preference with the value from the donor case. The imputation procedure was restricted to individuals who belonged to the panel during the same time period (e.g. March and August 2015 primary vote preferences were not retroactively imputed for panelists who joined in late 2015).

For GOP Voters, a Winding Path to a Trump Nomination
Methodology