Next week, Republican voters will begin the process of selecting their party’s 2016 presidential nominee. One of the major questions will be which GOP voters turn out, and which stay home.

A person’s past voting history can be a powerful predictor of future turnout. A new analysis of the Republican electorate in 2012, using the national voter file, reveals substantial attitudinal and demographic differences between verified GOP primary voters and Republicans who voted in the general election, but not the primaries. 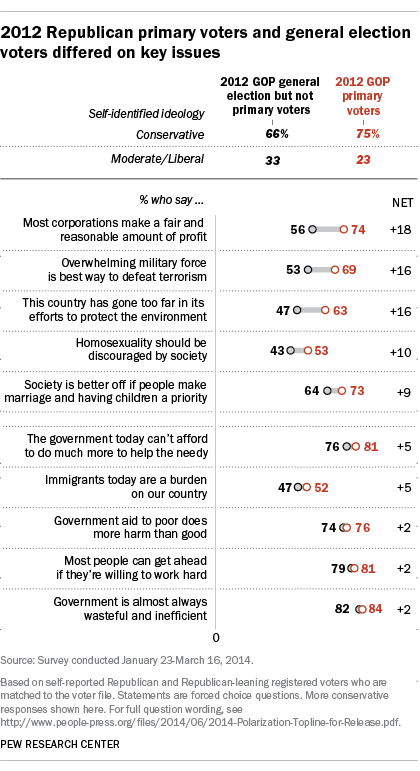 The study confirms the conventional wisdom that, in many ways, GOP primary voters were more conservative than those Republicans who did not participate in that year’s primaries but would eventually vote in the general election, both in their self-identification and in their political values.

GOP primary voters in 2012 were more skeptical of environmental protection, more supportive of the use of “overwhelming” force against terrorism and more likely to oppose societal acceptance of homosexuality.

At the same time, the analysis shows there also was common ground between GOP voters who voted in the primaries and those who did not in opinions about the government and the social safety net.

This analysis is based on 1,575 Republican and Republican-leaning registered voters who are part of Pew Research Center’s nationally-representative American Trends Panel, and who could be matched to the national voter file. 1

The GOP primary electorate represented a relatively small share of those who went on to vote in the general election. Of Republicans who were verified to have voted in the general election, only 25% are verified as having voted in Republican primaries or caucuses in 2012; while 75% do not have a record of having voted in the primaries or caucuses that year. 2

Primary voters: Republican and Republican leaners who say they are registered to vote and who have a validated record of voting in the 2012 primary election.

The attitudes and demographics of Republican primary and general election voters were drawn from Pew Research Center’s 2014 study of partisan polarization. This study is unique in that it is able to, at the individual level, pair rich public opinion data with voting history. Past research has compared the opinions of likely voters (who are identified based on self-reported data) to non-voters, but this report is a rare opportunity to link these views to actual voter turnout.

This analysis cannot provide state-level data on GOP primary voters, but the national differences between GOP primary voters and general election only voters are seen both in states that held early primaries in 2012 (Super Tuesday and earlier) and in states with later primaries. In addition, there is no analogous study of Democratic primary voters in 2012, when Barack Obama was unchallenged as his party’s nominee.

The voter file, gathered from publicly available individual voter lists from each state and standardized by a vendor, contains information on nearly every voter’s turnout history along with a variety of demographic information. The voter file does not indicate the candidates for whom a person voted, only whether he or she has a record of having voted in that election.

Matching the voter file to our survey data allows us to incorporate past turnout history by validating whether panel respondents were recorded as having cast a ballot in the 2012 primary and general elections. However, a known error is introduced when using the voter file. While the presence of a record of voting almost certainly means that a person voted, the absence of a record does not necessarily mean that the person did not vote.

As part of the core American Trends Panel methodology, the names and addresses of most panelists were collected. This was then used to match respondents from the survey sample to their corresponding record in a national voter file. To preserve the privacy of the panelists, the names and addresses of the panelists are securely stored and kept separate from the survey data and voter file information.

And while 69% of primary voters said military force was the best way to defeat terrorism around the world, that compared with a narrower majority (53%) of general election only GOP voters.

There were also substantial gaps in views of business: 74% of GOP primary voters thought corporations made a “fair and reasonable amount of profit,” while just 56% of Republicans who only voted in the general election said the same.

However, Republican primary voters and non-primary general election voters did not differ substantially in their views of government and the social safety net. Large majorities of both groups said government was wasteful and inefficient (primary 84%; general only 82%) and viewed government aid to the poor as doing more harm than good (76% vs. 74%).

On the issue of immigration there is also little difference between the groups; about half of both primary (52%) and general election only (47%) viewed immigrants as a burden on the country.

Ideological consistency, self-identification and views of the other side

The 2012 GOP primary electorate included a greater share of voters who were across-the-board conservative in their political values than the GOP general electorate. 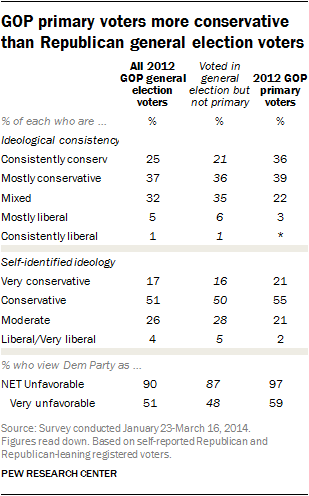 By comparison, GOP general election only voters were less likely to be down-the-line conservative in their political values and more likely to express a mix of conservative and liberal positions: just 21% were consistently conservative (58% were at least mostly conservative), while fully 35% were ideologically mixed. Only 7% took more liberal than conservative positions.

GOP primary voters were also more likely to self-identify as conservative than GOP voters in the general election (75% vs. 66%).

And, in keeping with past research that finds a link between partisan antipathy and political engagement, dislike of the opposing party was more pronounced among 2012 GOP primary voters than among general election only voters. Nearly all GOP primary voters (97%) viewed the Democratic Party unfavorably in 2014, and fully 59% said their view was very unfavorable, while those opinions were somewhat less negative among GOP general election only voters (87% unfavorable, 48% very unfavorable). The two groups did not differ significantly in views of their own party.

In addition to being more likely to vote, Republicans and Republican leaners who voted in the 2012 primary elections have higher levels of political engagement than those who voted in the general election but not the primaries. Primary voters were more likely than others to pay attention to, and talk about, politics than other GOP voters. About three-quarters (78%) of GOP primary voters reported following government and public affairs most of the time, while fewer (61%) general election only voters said the same.

And when asked in a late spring 2014 survey how often they discuss government and politics with others, a quarter (28%) of GOP primary voters said “nearly every day” compared with 16% of general election voters who did not participate in the primaries.

Republicans who voted in the 2012 primary were also much more likely to report having contributed money to a candidate, to have contacted a public official and to have been contacted by campaigns: In an early 2014 survey, 31% said they had contributed money to a candidate or campaign in the past two years, including 19% who had given $100 or more. That compared with just 16% of Republican general election only voters who donated any money during this period, and only 10% who donated $100+.

GOP primary voters were somewhat more likely to report having attended a campaign event than non-primary Republican general election voters (25% vs 16%); while few in either group said they had worked or volunteered for a political candidate in the prior two years.