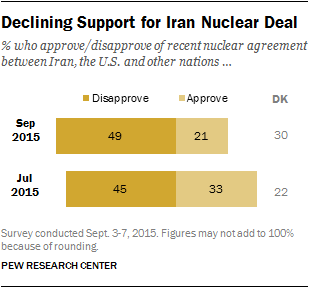 In mid-July, a week after President Obama announced the deal, 33% of the public approved of the agreement, while 45% disapproved and 22% had no opinion. Over the past six weeks, the share approving of the agreement has fallen 12 percentage points (from 33% to 21%), while disapproval has held fairly steady (45% then, 49% now). Somewhat more express no opinion than did so in July (22% then, 30% now). 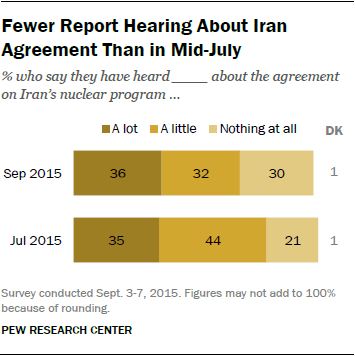 The latest national survey by the Pew Research Center, conducted Sept. 3-7 among 1,004 adults, finds that the contentious debate over the Iran agreement has not resonated widely with the public. In fact, the share saying they have heard either a lot or a little about the agreement has declined from 79% in July to 69% in the new survey. The share saying they have heard “nothing at all” about it has increased nine percentage points, from 21% to 30%. 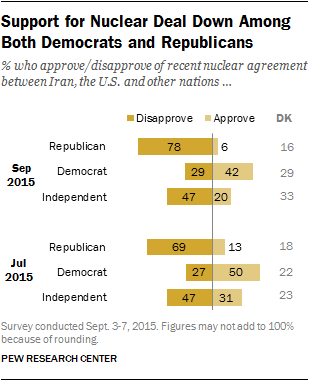 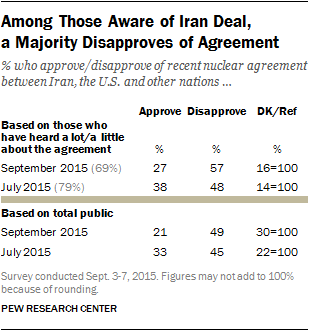 When opinion about the Iran nuclear agreement is based only on those who have heard a lot or a little about the agreement, opposition to the agreement exceeds support by more than a two-to-one margin (57% to 27%).

Among those aware of the Iran deal, the share approving of the agreement has declined 11 percentage points since July, while the percentage disapproving has risen nine points. 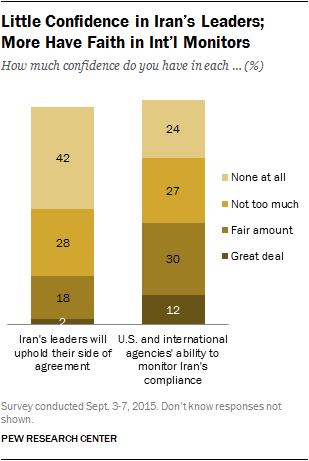 These views are largely unchanged since July, though the share expressing no confidence at all in Iran’s leaders to abide by the agreement has risen slightly (from 37% to 42%). 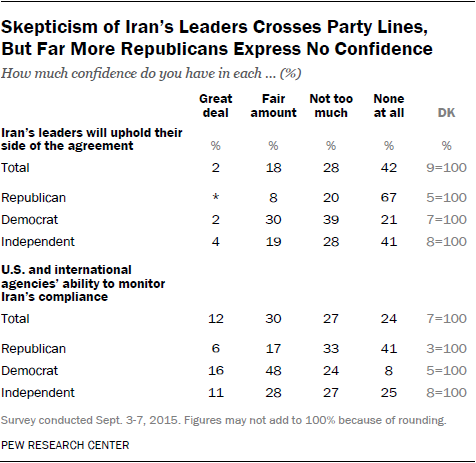 A majority of Democrats (64%) say they have a great deal (16%) or fair amount (48%) of confidence in the ability of the United States and international agencies to monitor Iran’s compliance to the nuclear agreement. Fewer than half as many Republicans (23%) say they are confident in the ability of the U.S. and other nations to ensure that Iran is living up to the agreement. These opinions are little changed from July.

Changing Views of the Iran Agreement 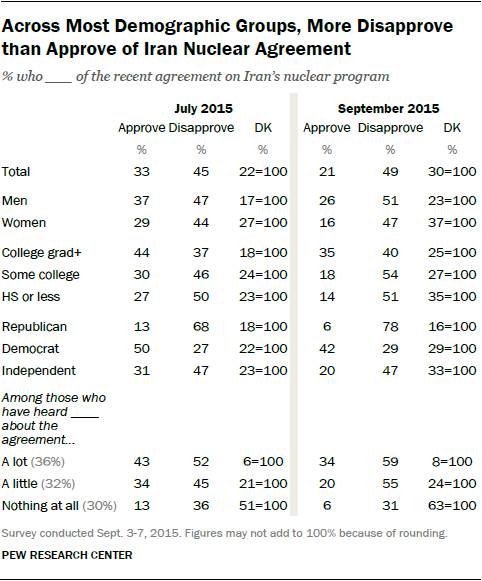 Since July, support for the Iran nuclear agreement has fallen across most demographic groups, though in many cases, the share who disapproves has not changed substantially.

Among adults with no more than a high school education, for instance, just 14% approve of the nuclear agreement, while 51% disapprove; roughly a third (35%) do not express an opinion. Since July, approval of the agreement has fallen 13 percentage points among this group (27% then), but disapproval is largely unchanged (50% then). The share not voicing an opinion has risen 12 points (23% then).

College graduates, by contrast, have mixed opinions of the nuclear deal (35% approve, 40% disapprove). In July, somewhat more college graduates approved of the agreement than disapproved (44% vs. 37%). 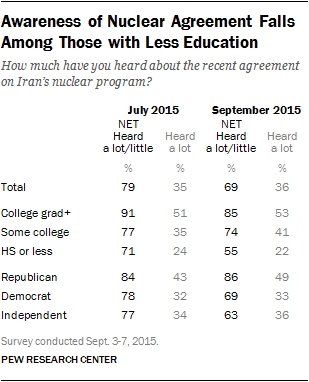 While the share of Americans with at least some awareness of the nuclear agreement has declined 10 percentage points since July, there has been almost no change in the share who say they have heard a lot about it (35% then, 36% now).

Republicans (49%) are far more likely than Democrats (33%) or independents (36%) to say they have heard a lot about the agreement and that gap appears to have widened somewhat since July.

In terms of overall awareness of the agreement, the decline is particularly pronounced among those with no more than a high school education. In July, 71% of those with a high school degree or less education said they heard at least a little about the Iran nuclear agreement; today 55% report hearing about it. There has been less change in awareness among adults with more education.