From the start, the Republican presidential field for 2016 has been much more crowded than the Democratic field. But voters in each party have similar views of the quality of their party’s candidates. 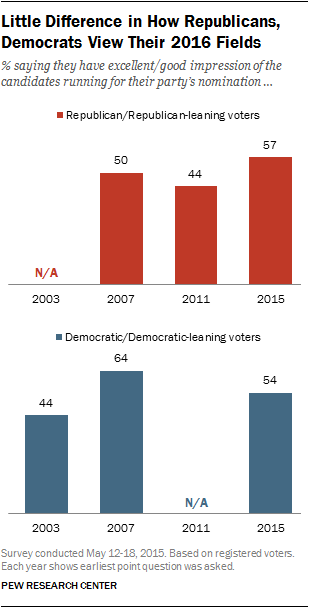 Nearly six-in-ten (57%) Republican and Republican-leaning registered voters say they have an excellent or good impression of their party’s presidential candidates. That compares with 54% of Democratic and Democratic-leaning voters who have positive impressions of the Democratic Party’s candidates.

Republicans are more positive about the GOP field than they were at nearly comparable points in the past two presidential campaigns. In May 2011, 44% of Republicans viewed the field of GOP candidates as excellent or good. In September 2007, 50% gave the presidential candidates positive marks.

Democrats are less positive about the current group of candidates than they were in September 2007, at a somewhat later point in the 2008 campaign. At that time, 64% said the Democratic candidates as a group were excellent or good. Throughout the fall of 2007 and early 2008, Democrats consistently expressed more positive views about their party’s candidates than Republicans did about theirs.

In September 2003, just 44% of Democrats and Democratic leaners gave positive ratings to their party’s field of candidates. At that time, the Democrats were challenging an incumbent president, as were the Republicans in 2011.

The survey finds that Republicans have generally positive impressions of six GOP declared or likely candidates. Jeb Bush is the best known of those included in the survey, but he also has the highest unfavorable rating: 52% of Republicans and Republican leaners view Bush favorably, while 35% view him unfavorably. 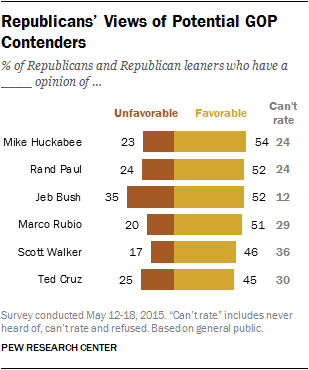 Meanwhile, Hillary Clinton, the clear front-runner for the Democratic nomination, is widely popular with Democrats; 77% of Democrats and Democratic leaners view her favorably. 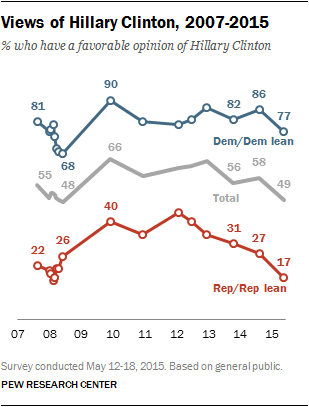 Bill Clinton’s favorable rating has fallen 10 points since 2012. Currently, 58% of the public views Bill Clinton favorably, down from 68% in September of that year. Clinton’s ratings also are at their lowest point since 2008.

Clinton’s favorable ratings continue to be more positive than those of another former president, George W. Bush. Currently, 44% have a favorable opinion of Bush, down seven points from last August, but still higher than his 37% rating shortly before he left office. 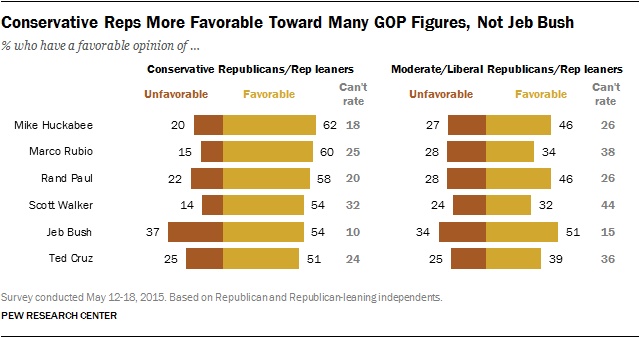 For the five other declared or likely Republican candidates included in the survey, ratings are more positive among conservative than among moderate and liberal Republicans, and this is particularly pronounced in the ratings of Marco Rubio and Scott Walker. For example, by a 60% to 15% margin, more conservative Republicans hold a favorable than unfavorable view of Marco Rubio; 25% cannot offer a rating. Rubio’s ratings among moderate and liberal Republicans are much more mixed (34% favorable, 28% unfavorable), while as many as 38% cannot offer a rating. 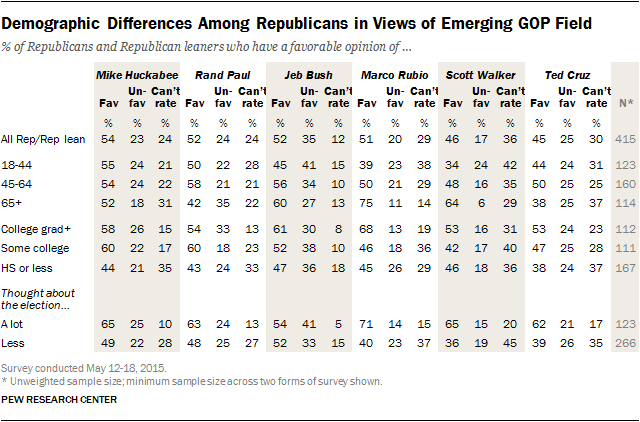 Hillary Clinton remains an overwhelmingly popular figure with Democrats. Currently, 77% of Democrats and Democratic leaners view her favorably; that is down slightly from August 2007 (81%), at a somewhat later point in her last presidential race.

As was the case in August 2007, liberal Democrats view Clinton more favorably (81%) than do conservative and moderate Democrats (74%). Unlike eight years ago, there are virtually no gender differences in views of Clinton among Democrats: 78% of Democratic women and 75% of Democratic men view her favorably.

While Biden remains considerably more popular among Democrats than Republicans, Republican views of Biden are relatively unchanged over the last few years, while Democratic opinions have become less positive.

Today, 58% of Democrats and Democratic leaners view Biden favorably, down 15 points from October 2013, when nearly three-quarters (73%) did so. Just 17% of Republicans and Republican leaners have a favorable opinion of Biden, a figure that is little changed over the last several years.

Opinion of Past Presidents: Bill Clinton and George W. Bush

Of the two most recent past presidents, Bill Clinton remains a more popular figure than George W. Bush. Today, 58% of Americans view Clinton favorably, while 38% have an unfavorable opinion. George W. Bush, by contrast, is viewed more negatively than positively (44% favorable, 52% unfavorable). 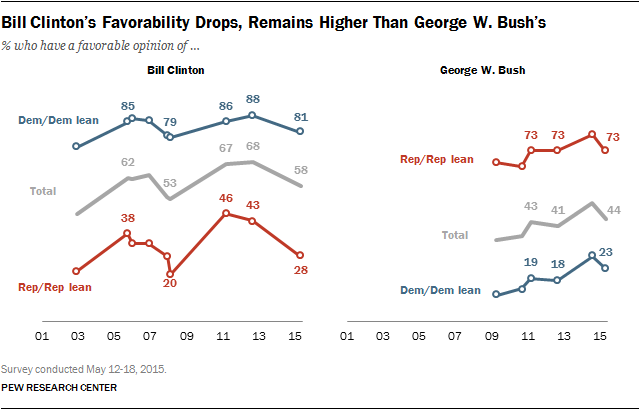 Though views of Bill Clinton remain in positive territory, they have declined 10 points since 2012. In particular, Clinton is now viewed far less favorably by Republicans and Republican leaners than he was in September 2012 (just 28% view him favorably today, down from 43%). And while about eight-in-ten (81%) Democrats and Democratic leaners view the former Democratic president favorably today, his ratings among Democrats were slightly better (88% favorable) in September 2012.

George W. Bush’s ratings have been relatively stable since early 2011. Currently, nearly three-quarters (73%) of Republicans and Republican leaners, along with just 23% of Democrats and Democratic leaners have positive opinions of the former GOP president.