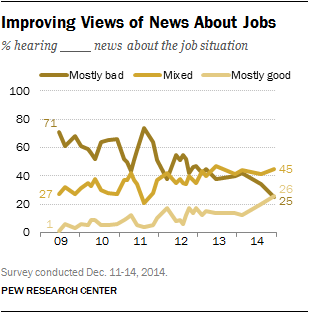 For the first time in at least five years, as many Americans say they are hearing good news (26%) as bad news (25%) about the nation’s job situation; a 45% plurality reports hearing a mix of good and bad news.

This is the first time that more than 20% have expressed positive views about job news since the Pew Research Center began tracking this question in 2009. In June of that year, just 1% said news about the job situation was mostly good, and 71% said it was mostly bad. In the last year alone, the share hearing mostly bad news about jobs has fallen 15 points, while the percentage hearing mostly good news has risen nine points. 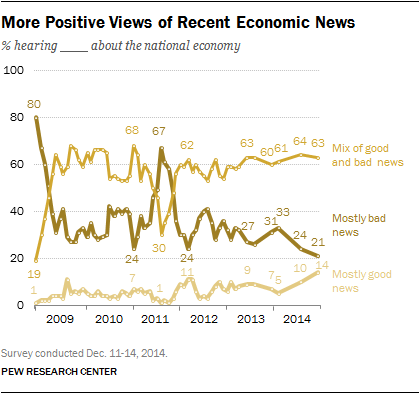 The new national survey by the Pew Research Center, conducted Dec. 11-14 among 1,001 adults, finds that declining gas prices are registering widely with the public. Seven-in-ten (70%) are hearing mostly good news about gas prices, compared with just 8% who are hearing mostly bad news. 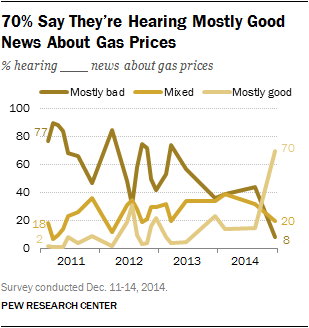 Prior to this survey, perceptions of gas prices had never been more positive than negative in Pew Research’s periodic tracking that started in February 2011. In July 2012, as many were hearing mostly good news about gas prices as bad news (31%).

Majorities in all geographic regions say they are hearing mostly good news about gas prices, which average $2.55 across the country, according to the U.S. Energy Information Administration 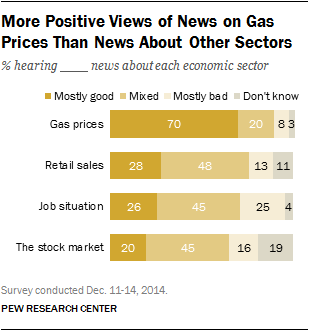 With the holiday shopping season underway, about twice as many are hearing good news about retail sales (28%) as bad news (13%); about half (48%) are hearing mixed news. This sentiment is roughly in line with opinions measured in December of each of the previous two years. 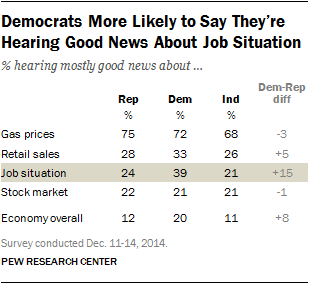 Republicans and Democrats have similar views when it comes to news about gas prices, retail sales and the stock market. However, they differ in their judgments of jobs news and overall economic news. 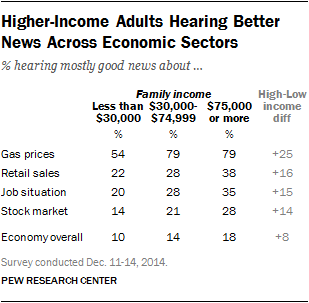 When it comes to overall economic news, 60% of both Democrats and Republicans say the news lately has been mixed, but somewhat more Democrats (20%) than Republicans (12%) say it has been mostly good.

Those with family incomes of $30,000 or less see a dimmer picture; across all economic sectors, they are less likely than higher-income adults to report hearing mostly good economic news. For example, two-in-ten (20%) lower-income adults say they are hearing mostly good news about the job situation, compared with 35% of those with family incomes of $75,000 or more.