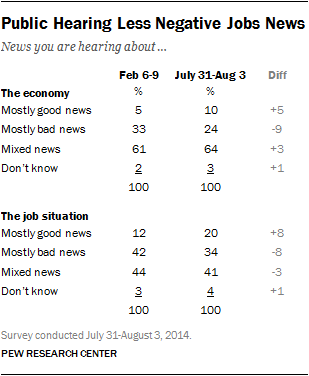 Amid recent reports on the U.S. unemployment rate and gross domestic product, public views of economic news have improved modestly since February. A 64%-majority of the public says they are hearing “a mix of both good and bad news” about the economy these days, little changed over the last several months. But about a quarter (24%) say they are hearing mostly bad news about the economy, down from 33% in February and as low as at any point over the past five years. Though relatively few say they are hearing mostly good economic news (10%), this figure has edged higher over the past six months (from 5%).

The new national survey by the Pew Research Center, conducted July 31-August 3 among 1,002 adults, finds Americans’ views of news about consumer prices and gas prices are, on balance, negative. 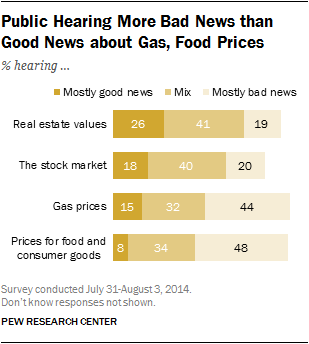 Similarly, impressions of news about gas prices remain more negative than positive (44% bad news, 32% mixed news, 15% good news). These ratings also are somewhat worse than they were in February.

Views of news about real estate values and the stock market are little changed from six months ago. Overall, more describe real estate news as positive (26% good news) than negative (19% bad news), while 41% describe news as mixed. When it comes to the stock market, 40% describe the news they have been hearing as mixed; about equal percentages say it has been mostly bad (20%) as mostly good (18%). 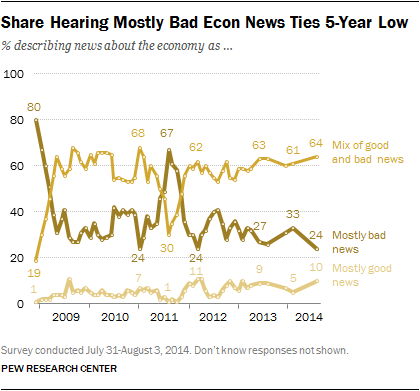 Public perceptions of overall economic news have changed only modestly in recent years, after bouncing back following negative perceptions of economic news amid the 2011 debt limit negotiations and accompanying downgrade of the United States’ credit rating. Since 2012, far more have been hearing mixed news about the economy than good or bad news. Good economic news has not surpassed bad news in the more than five years the Pew Research Center has been asking the question. 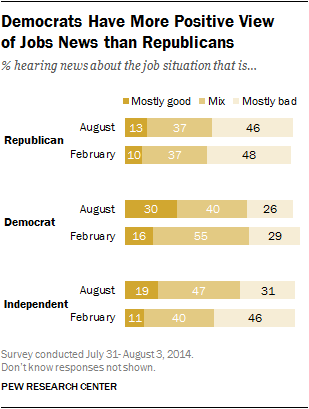 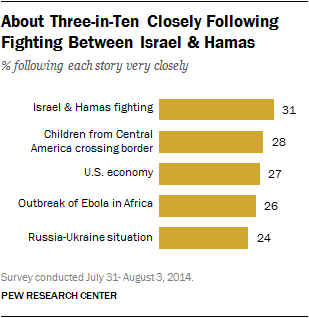 Nearly as many (28%) say they very closely followed news about Central American children crossing the U.S.-Mexico border; a week ago, 33% followed this story very closely.

And in the wake of new U.S. and European Union sanctions against Russia, 24% say they followed news about the situation involving Russia and Ukraine. News about the U.S. economy attracted a similar level of attention (27% following very closely). 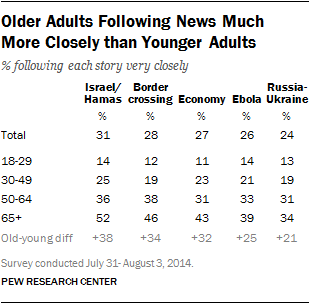 Across all five stories, the gap in news interest between younger adults and older adults is large. About half of adults 65 and older (52%) are closely following the Israel-Hamas fighting, for example, compared with 14% of those ages 18-29. Older adults also are roughly four times as likely as younger adults to be closely following news about Central American children at the U.S.-Mexico border (46% vs. 12%).