Most Americans (65%) continue to favor building the Keystone XL pipeline, perhaps the most politically contentious energy issue in Barack Obama’s second term. Yet when it comes to another issue making headlines – a proposal to tighten greenhouse gas emissions from power plants – the public favors stricter limits, by exactly the same margin as the Keystone pipeline (65% to 30%). 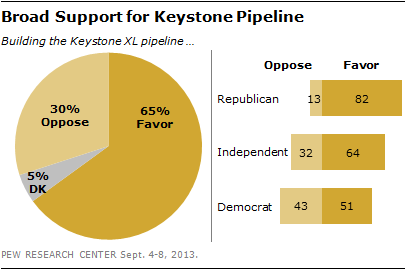 Yet over the past year, opposition to the drilling process known as fracking has increased, as has opposition to nuclear power. Just 38% favor promoting the increased use of nuclear power while 58% are opposed, the highest level of opposition since the question was first asked in 2005.

The national survey by the Pew Research Center, conducted Sept. 4-8 among 1,506 adults, finds that, as with other energy-related issues, there is a sharp partisan divide on the Keystone pipeline. But while an overwhelming majority of Republicans (82%) favor construction of the pipeline, so too do 64% of independents and about half of Democrats (51%).

President Obama’s decision about whether to go ahead with the pipeline is expected in the next few months. Environmental groups staunchly oppose the project, while GOP lawmakers are stepping up pressure on Obama to approve it. 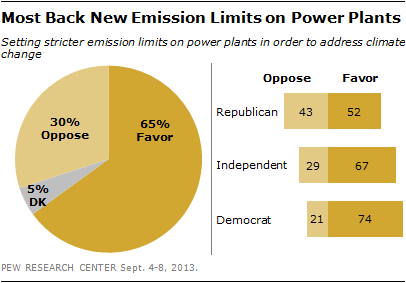 The survey was conducted before the EPA announced its proposal to limit greenhouse gas emissions from new power plants. Nearly two-thirds of the public favors stricter emissions limits on power plants, including 74% of Democrats, 67% of independents and 52% of Republicans. 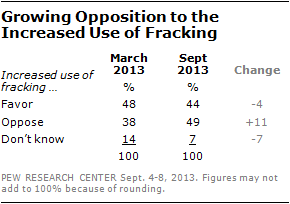 Overall, 44% favor and 49% oppose the increased use of fracking, the drilling method that uses high-pressure water and chemicals to extract oil and natural gas from underground rock formations. In March, there was more support (48%) than opposition (38%) for more extensive use of the drilling process. The rise in opposition to fracking has come among most demographic and partisan groups. 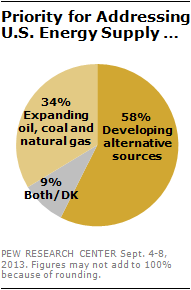 There are age differences in opinions about a number of energy policies, but they are particularly stark in views of overall energy priorities. Fully 73% of those younger than 30, and 61% of those 30 to 49, say it is more important to develop alternative energy sources; among those 50 and older, only about half (48%) view alternative energy as the greater priority. 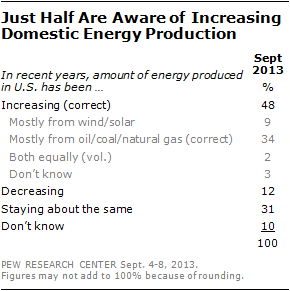 The survey finds that the recent energy boom in the United States has not registered widely with the public: only 48% correctly say that U.S. energy production is up in recent years and just 34% attribute it mainly to greater oil, coal and natural gas, even though oil and gas exploration has been the primary driver of this trend.

Support for the Keystone XL pipeline has remained fairly stable during the past six months (65% today, 66% in March), though opposition has risen from 23% to 30%.

During this period, the Obama administration has continued to weigh whether to allow completion of the pipeline, which would transport oil from Canada’s oil sands through the Midwest to refineries in Texas. Because the pipeline would cross an international border, the northern leg requires federal approval. The southern portion does not, and much of it has been constructed.

In June, President Obama for the first time linked the pipeline debate to climate change, saying he would approve the project only if it would not “significantly exacerbate the problem of carbon pollution.”

The balance of opinion favoring the pipeline is roughly the same in the six states it would pass through as in other parts of the country. In the six states the pipeline would traverse – Montana, South Dakota, Nebraska, Kansas, Oklahoma and Texas – 69% support its construction while 28% are opposed. Those in other states support it by a margin of 64% to 31%.

Since March, opposition to increased fracking has grown significantly across most regions and demographic groups. Overall, 44% now favor increased use of fracking while 49% are opposed. In March, support exceeded opposition by 10 points (48% to 38%). 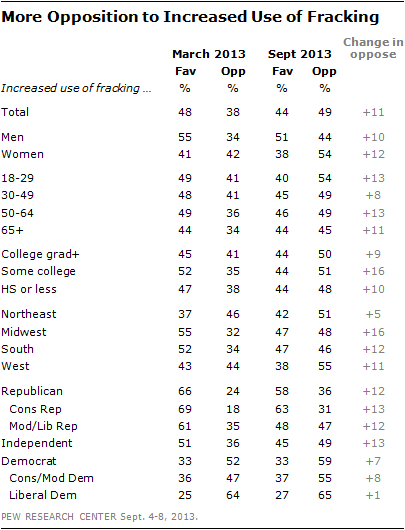 While opposition among both men and women has increased since March, there continue to be wide gender differences over the increased use of fracking. About half of men (51%) favor more fracking compared with 38% of women.

Independents and Republicans are more likely to oppose fracking now than in March (by 13 points and 12 points, respectively). Democrats’ views have shown less change, but a majority of Democrats continue to oppose increased use of the drilling method (59%).

Overall, people who are aware that U.S. energy production is growing – and that the increase is mostly coming from traditional energy sources (34% of the public) – have about the same views of fracking as do the majority of Americans who are not aware of this. 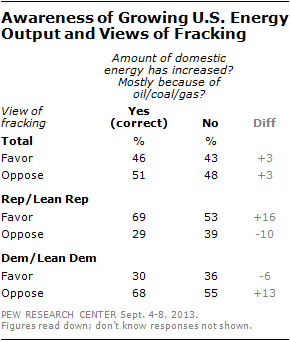 However, opinion is more divided along partisan lines among those who know that energy production is increasing from traditional sources. Fully 69% of Republicans and Republican leaners who know that the energy supply is increasing and that the growth is mostly from sources like oil, coal and natural gas favor increased use of fracking. Conversely, a nearly identical percentage of Democrats and Democratic leaners (68%) who are aware of trends in domestic energy production oppose increased use of fracking.

Opinion is less sharply divided among Republicans and Democrats who are unaware that the domestic energy supply is increasing, mostly as a result of more production among traditional sources. 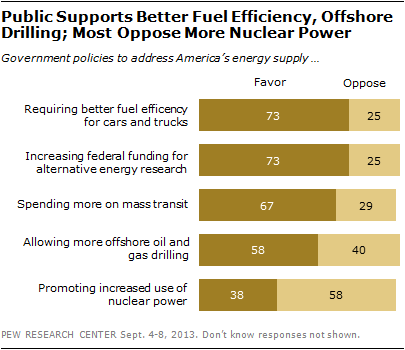 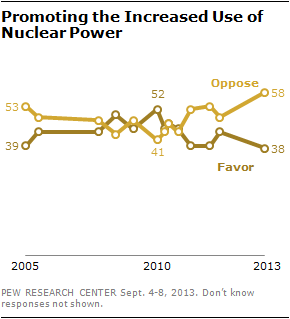 But it remains significantly higher than it was in June 2010, following the oil spill in the Gulf of Mexico, when just 44% of people wanted to allow more drilling in U.S. waters

There are substantial partisan differences in opinions about each of the energy policies on the poll – and in many cases those differences have widened over time. 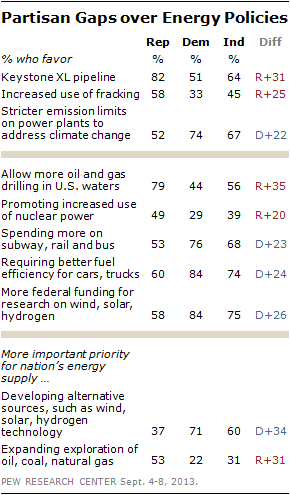 As in previous Pew Research Center polls, one of the largest gaps between the parties is on the question of offshore drilling. Nearly eight in-ten Republicans (79%) – and 90% of Republicans and Republican leaners who agree with the Tea Party – support allowing more offshore oil and gas drilling, compared with 44% of Democrats.

And when asked which should be the more important priority for addressing the nation’s energy supply, large majorities of both Democrats (71%) and independents (60%) say it is more important to develop alternative sources, such as wind, solar and hydrogen technology. A smaller majority of Republicans (53%) say the priority should be expanding exploration of oil, coal and natural gas.

Just a few years ago, there was broad agreement on some – though not all – energy policy objectives. In 2006, during George W. Bush’s presidency, comparable majorities of independents (85%), Republicans (82%) and Democrats (77%) favored increasing federal funding for research on wind, solar and hydrogen technology. 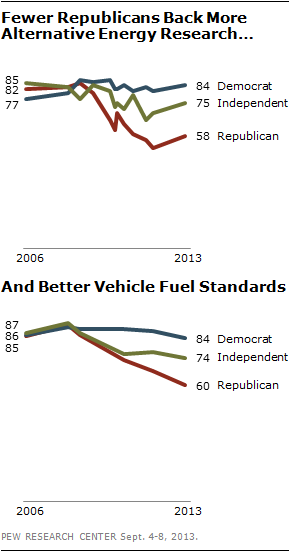 The bipartisan consensus on alternative energy research and other policies – including better fuel efficiency standards – was noted in a February 2006 report, “Both Reds and Blues Go Green on Energy.”

There has been a similar trend in opinions about requiring better fuel efficiency for cars, trucks and SUVs. Seven years ago, large majorities across all partisan groups (87% of independents, 86% of Democrats and 85% of Republicans) favored higher fuel efficiency standards. The percentage of Democrats favoring this has changed little over this period (currently 84% favor), while falling 25 points among Republicans and 13 points among independents.

In September 2008, 87% of Republicans, 67% of independents and 55% of Democrats favored more drilling in U.S. waters. Today, there is less support across all three groups, but the partisan gap is about as large as it was then (35 points now, 32 points in September 2008).