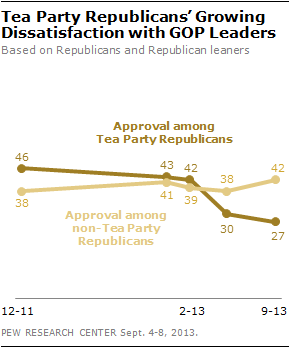 As lawmakers return for what promises to be a busy fall session, GOP congressional leaders face mounting disapproval among Tea Party Republicans. Just 27% of Republicans and GOP leaners who agree with the Tea Party approve of the job Republican leaders in Congress are doing, compared with 71% who disapprove.

The job rating of GOP leaders among Tea Party Republicans has fallen 15 points since February, from 42% to 27%. Disapproval has risen from 54% to 71% over this period. There has been no similar decline among Republicans who do not agree with the Tea Party. Currently, 42% of non-Tea Party Republicans and Republican leaners approve of how GOP leaders in Congress are handling their job, which is little changed over the past year.

This internal dissent contributes to the lower job ratings Republican leaders receive from the public when compared with Democratic congressional leaders. The latest national survey by the Pew Research Center, conducted Sept. 4-8 among 1,506 adults, finds that just 24% of the public approves of Republican leaders’ job performance, while somewhat more (33%) approve of the job of Democratic congressional leaders. 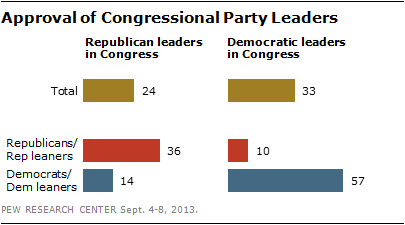 There is no internal ideological divide within the Democratic Party, as the GOP leadership faces. Among all Democrats and Democratic leaners, 55% of moderates and conservatives and 60% of liberals approve of the job performance of the party’s congressional leaders.

While Tea Party Republicans have a low regard for GOP congressional leadership generally, it is not clear that this transfers to the party leaders individually. A July Pew Research Center survey found similarly low satisfaction with the GOP leadership’s job, yet also found that House Speaker John Boehner and Senate Minority Leader Mitch McConnell were better known and better liked among Tea Party Republicans than non Tea-Party Republicans.

Yet both leaders were viewed less favorably among Tea Party Republicans than were several other major GOP figures tested, including Paul Ryan, Rand Paul, Marco Rubio and Ted Cruz. 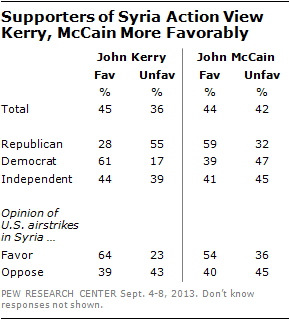 The new survey finds that 45% of the public views Secretary of State John Kerry favorably while 36% have an unfavorable impression, and are largely unchanged from earlier in the year when he was first appointed and confirmed. Public opinion is divided about Sen. John McCain (44% favorable, 42% unfavorable).

Both men are viewed more favorably by those who support military airstrikes against Syria than those who oppose them. Among the 28% of the public that supports U.S. airstrikes in response to Syria’s reported use of chemical weapons, Kerry is viewed favorably by 64% to 23%. Kerry’s image is mixed among the much larger share of the public (63%) that opposes airstrikes (39% view Kerry favorably, 43% unfavorably).

McCain’s favorable ratings also are higher among supporters of U.S. military action in Syria. About half of those who support U.S. airstrikes (54%) view McCain favorably compared with 40% of those who oppose airstrikes.