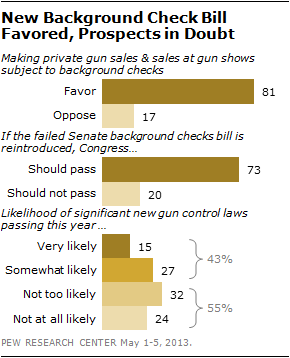 Nearly three-quarters of Americans (73%) say that if the Senate bill is reintroduced, Congress should pass it.

However, even gun control advocates are pessimistic that new gun policy legislation will be enacted this year. Overall, 55% of the public – including 53% of those who favor controlling gun ownership – say it is unlikely that Congress will pass significant new gun control laws this year.

The national survey by the Pew Research Center, conducted May 1-5 among 1,504 adults, finds advantages and disadvantages for both sides in the debate over gun policy. 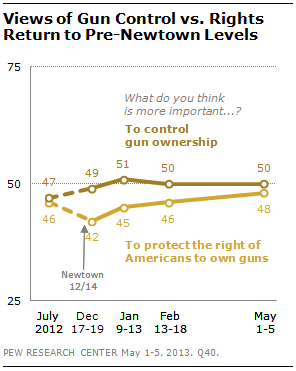 Yet the overall trend on whether it is more important to control gun ownership or protect gun rights has edged back in the direction of gun rights. And when it comes to the importance of gun policy as a voting issue, gun rights supporters have the advantage.

In the days after the school shooting in Newtown, Conn. last December, more prioritized gun control than gun rights (49% vs. 42%), the first time this had occurred since Barack Obama became president. Roughly five months later, the public is again evenly divided over whether in general it is more important to control gun ownership (50%) or to protect the rights of Americans to own guns (48%). This mirrors the close divide in opinion that existed prior to Newtown. (See Pew Research Center’s 20 years of public opinion data on gun rights and gun control.) 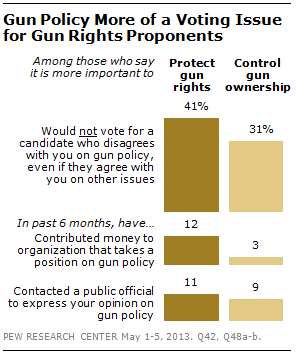 Among those who prioritize gun rights, 41% say they would not vote for a candidate with whom they disagreed on gun policy, even if they agreed with the candidate on most other issues. Fewer gun control supporters (31%) say gun policy is a make-or-break voting issue for them. 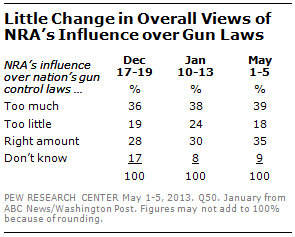 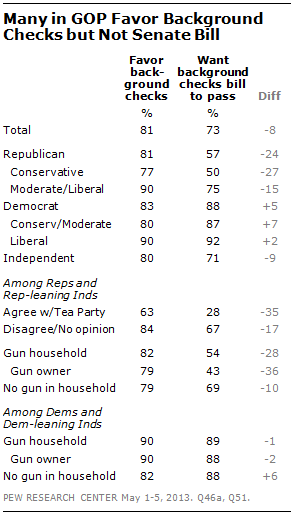 A wide majority of Americans would like to see the Manchin-Toomey bill, which failed to garner sufficient votes in the Senate a few weeks ago, to ultimately succeed. Yet even at 73%, support for a new background checks bill falls short of the 81% who favor expanded background checks in general. Republicans – particularly conservatives and those who agree with the Tea Party – are most likely to see a distinction between the two.

The differences in support are even more dramatic among Republicans and Republican-leaning independents who agree with the Tea Party; 63% support making private gun sales subject to background checks, but fewer than half as many (28%) say Congress should pass the Senate bill to expand background checks, compared with 67% who say it should not. 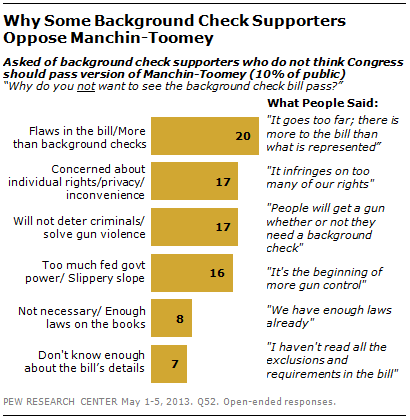 When those who support background checks in general but oppose the Senate legislation (10% of the public) are asked why they do not want to see the bill pass, 20% point to flaws in the legislation. Nearly as many cite worries about individual rights (17%) or say that it would expand government power too much (16%). Another 17% are critical of the legislation’s effectiveness, saying that it will not deter criminals or curb gun violence. 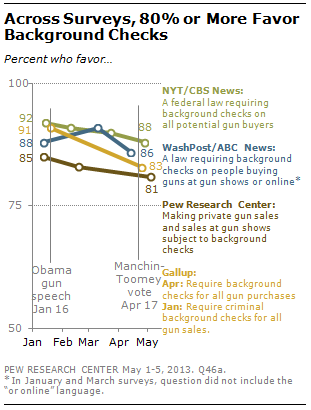 Since January, the Pew Research Center has asked its question on background checks three times. In the current survey, 81% favor making private gun sales and sales at gun shows subject to background checks. This is not significantly different from February (83%) and down only slightly from January (85%). 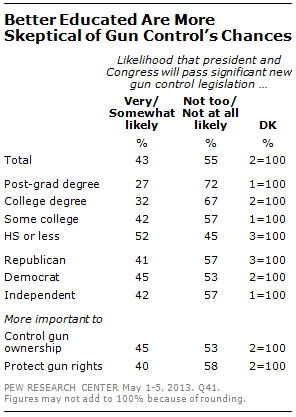 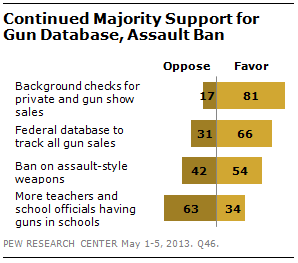 Overall, there has been little change since January in opinions about two other gun policy proposals: creating a federal database to track all gun sales and a ban on assault style weapons. Currently 66% support a federal gun database and 54% support an assault weapons ban.

Support for more teachers and school officials having guns in school has declined, from 40% in January to 34% in the current survey. More than six-in-ten (63%) oppose this proposal. 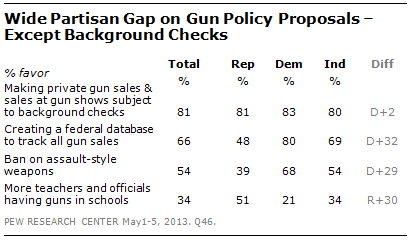 There are wide partisan differences over each of these proposals, in contrast to support for background checks. Substantial majorities of Democrats favor a federal gun sale database (80%) and a ban on assault-style weapons (68%); among Republicans, 48% and 39%, respectively, favor these proposals. 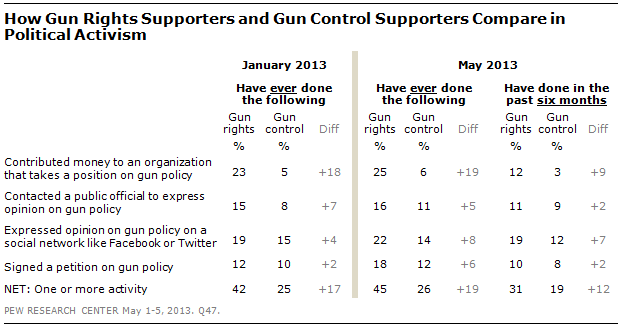 The gap in overall political outreach is more modest: 16% of gun rights proponents say they have ever contacted a public official to express their opinion on gun policy, compared with 11% of gun control proponents. However, when asked about just the past six months, similar numbers of gun rights (11%) and gun control (9%) proponents say they have expressed their views on the issue to a public official.

Gun rights and gun control proponents have also been about equally likely to have signed a petition on gun policy over the past six months (10% vs. 8%, respectively). There has been a larger gap in discussing the issue on social media: 19% of those who prioritize gun rights say they have expressed their opinion on social networks like Facebook or Twitter, compared with 12% of those who prioritize gun control. 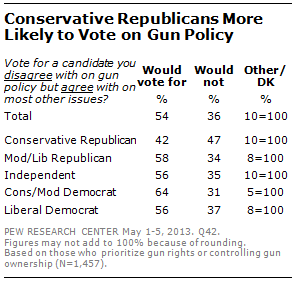 People who own guns (46%) are more likely than those in households with no guns (33%) to view gun policy as an important voting issue. 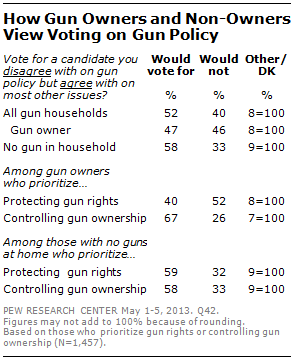 And among the vast majority of gun owners who support gun rights, 52% say they would not vote for a candidate with whom they disagreed on gun policy even if they agreed with them on most other issues. Among the much smaller share of gun owners who favor gun control, just 26% view gun policy as an important voting issue.

Among those in households with no guns, about as many who favor gun control (33%) as gun rights (32%) say they would not vote for a candidate who they disagreed with on gun policy but agreed with on most other issues.

Influence of the National Rifle Association 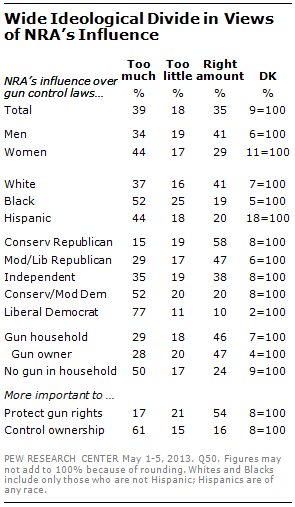 While the NRA has played a highly visible role in the congressional debate over gun policy, public views of its influence have changed only modestly since December. Currently, about four-in-ten (39%) say it has too much influence over gun control laws, while 18% say it has too little influence and 35% say the organization has the right amount of influence.

A majority (61%) of those who prioritize controlling gun ownership think the NRA has too much influence. Among those who say it is more important to protect gun rights, 54% view the NRA’s influence as appropriate while 21% say the organization has too little influence.