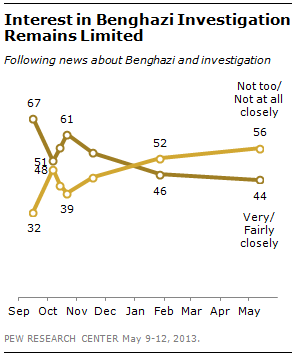 The public paid limited attention to last week’s congressional hearings on Benghazi. Fewer than half (44%) of Americans say they are following the hearings very or fairly closely, virtually unchanged from late January when Hillary Clinton testified. Last October, 61% said they were following the early stages of the investigation at least fairly closely.

The national survey by the Pew Research Center, conducted May 9-12 among 1,000 adults, finds that Americans are deeply split over how both the administration and congressional Republicans are handling the situation. Four-in-ten (40%) say the Obama administration has generally been dishonest when it comes to providing information about the Benghazi attack, but 37% say they have been generally 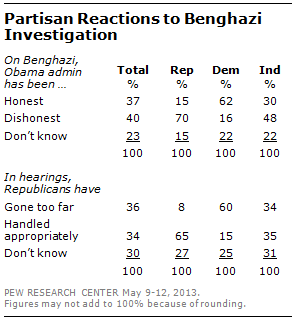 honest. And when it comes to the GOP-led investigation, 36% say Republicans have gone too far in the hearings, while 34% say they have handled them appropriately.

The judgment of independents leans against the administration at this point: By a 48% to 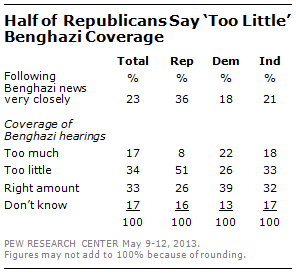 30% margin independents say the administration has been generally dishonest. But independents are split when it comes to Republican handling of the hearings.

Republicans are twice as likely as Democrats (36% vs. 18%) to be following news about the Benghazi hearings very closely. This mirrors earlier measures of 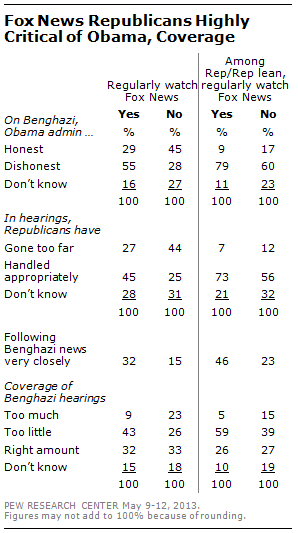 interest in the Benghazi situation dating back to last year. Republicans also are critical of what they see as insufficient press attention to the issue: 51% of Republicans say that news organizations have been giving too little coverage to the Benghazi hearings, compared with 26% of Democrats and 33% of independents.

News about the rescue of three women who had been held captive in a Cleveland home was far and away the public’s top story last week. 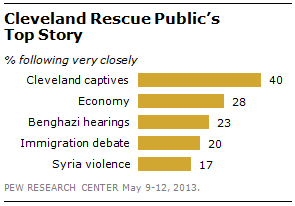 Interest in the rescue of the Cleveland women is higher than for the discovery of Jaycee Dugard, in August of 2009; at that time, 27% said they were very closely following news about Dugard, following her reappearance more than 18 years after having gone missing. Women (45%) are more likely than men (35%) to say they are very closely following news about the rescue of the women in Cleveland. 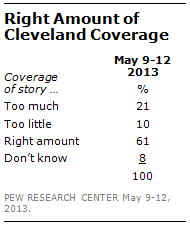 News about the immigration debate in Washington (20% very closely) and political violence in Syria (17%) garnered modest levels of public attention. In 2013, Pew Research surveys have measured interest in the debate over immigration five times, with very close interest climbing no higher than 23% in early April.