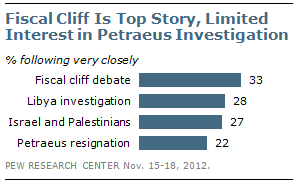 In a busy news week, more Americans say they followed the debate over the “fiscal cliff” very closely than the investigations into the Libya embassy attack, renewed violence in the Middle East or the FBI investigation that led to David Petraeus’s resignation as CIA Director after it found he was having an extra-marital affair.

The latest national survey by the Pew Research Center for the People & the Press, conducted Nov. 15-18 among 1,002 adults, finds that nearly identical percentages of Republicans (36%) and Democrats (35%) say they very closely followed the debate over the automatic spending cuts and tax increases that will take effect at the beginning of next year unless the president and Congress act. Republicans are about as interested as Democrats in the Petraeus investigation (28% vs. 21%). 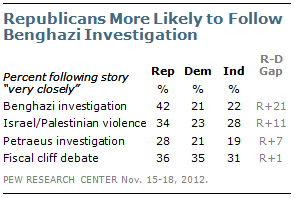 But there is a wide partisan gap in interest in another major story of the week; Republicans (42%) are much more likely than Democrats (21%) or independents (22%) to say they very closely followed the investigation into the September attack on the U.S. embassy in Benghazi, Libya very closely.

Notably, more people say the Petraeus situation is of either great or some importance (62%) than said that about Bill Clinton’s affair with Monica Lewinsky in February 1998 (52%), shortly after news of Clinton’s affair broke. There was a much wider partisan gap in perceptions of the importance of the Clinton-Lewinsky affair: Among Republicans, 42% said the scandal was of great importance to the nation, compared with 9% of Democrats. Fully 65% of Democrats said it was of little or no importance to the nation.

In November 2005, when Lewis Libby, a former national security aide to Vice President Dick Cheney was indicted for perjury and obstruction of justice, 79% felt it was of great (44%) or some (35%) 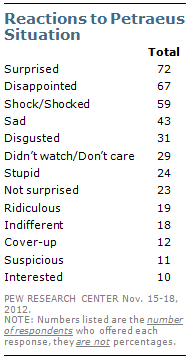 importance. More than half of Democrats (56%) said the Libby indictment was of great importance, compared with 30% of Republicans.

When respondents were asked to describe their reaction to news about Gen. Petraeus’s resignation and the ongoing FBI investigation into the situation, the words “surprised” and “disappointed” are used more than any others, along with “shocked,” “sad” and “disgusted.”

The survey finds no signs of a gender gap in interest or reactions to the Petraeus situation. Roughly equal percentages of men and women say they followed the story very closely (23% vs. 21%) and rate it as very important for the nation (28% vs. 31%). In addition, both men and women offer similar words to describe their reaction to the news.