As April 15 approaches, a majority of Americans (56%) have a negative reaction to doing their income taxes, with 26% saying they hate doing them. However, about a third (34%) say they either like (29%) or love (5%) doing their taxes.

The national survey by the Pew Research Center, conducted April 4-7 among 1,003 adults, finds that the expectation of getting a refund is cited most often for why people like doing their taxes, but it is not the only factor.

Tax System Seen as Unfair, In Need of Overhaul

When asked why they like doing their income taxes, 29% say that they are getting a refund, while 17% say they just don’t mind it or they are good at it; 13% say doing their taxes gives them a sense of control, while the same percentage cites a feeling of obligation – that it is their duty to pay their fair share.

Among those who dislike or hate doing their taxes, most cite the hassles of the process or the amount of time it takes: 31% say it is complicated, requires too much paperwork or they are afraid of making mistakes, while 24% say it is inconvenient and time-consuming. A much smaller share (12%) says they dislike doing their taxes because of how the government uses tax money. Just 5% of those who dislike or hate doing their income taxes say it is because they pay too much in taxes.

Overall, people with lower incomes are more likely to have a positive of view of doing their taxes than those with higher incomes. About 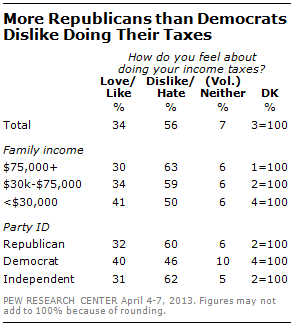 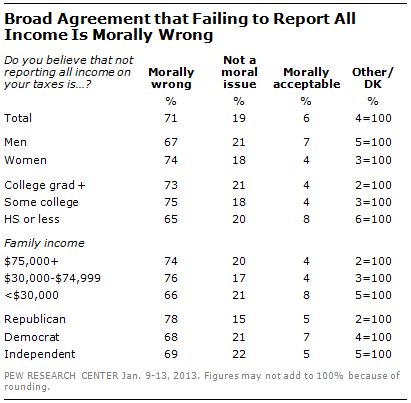 Seven-in-ten (71%) Americans agree that not reporting all income on your taxes is morally wrong, while 19% say it is not a moral issue; just 6% see this as morally acceptable.

This is down slightly from February 2006, when 79% said that not reporting all income was morally wrong.

Across all demographic groups, majorities agree that this is morally wrong. However, those with less educational attainment and lower family income are less likely than those with college degrees and higher incomes to say this. About two-thirds of those with a high school diploma or less (65%) or incomes below $30,000 (66%) say that not reporting all income is morally wrong, compared with about three-quarters of those in higher income and education groups.