When Barack Obama took office four years ago, reducing the budget deficit was a middle-tier item on the public’s agenda. Only about half of Americans (53%) viewed it as a top policy priority in January 2009, placing it ninth on a list of 20 policy goals.

But as Obama begins his second term, only the economy and jobs are viewed as more important priorities for the coming year. Currently, 72% say that reducing the budget deficit should be a top priority, up 19 points from four years ago. (Click here for a graphic of the public’s 2013 priorities).

The latest national survey by the Pew Research Center for the People & the Press, conducted Jan. 9-13, 2013 among 1,502 adults, finds that Americans continue to view other domestic initiatives as important priorities as well, despite their focus on the deficit. Growing numbers give high priority to dealing with education, the problems of the poor, crime and the environment.

Where the public stands on deficit reduction proposals

The survey finds that 52% view protecting the environment as a top policy priority, up 11 points from January 2009. However, dealing with global warming remains at the bottom of the public’s agenda for 2013; just 28% see this as a top priority, little changed from recent years.

Gun control also ranks relatively low on the public’s priority list; just 37% rate it as a top priority, 18th out of 21 policy goals tested. This item was last asked in 2001, when support for gun control was much broader nationwide, and 47% rated it as a top priority. However, reducing crime has become a more important policy priority in the past year; 55% rate this as a top priority, up seven points since last January and the highest percentage since 2007.

The survey finds that energy has slipped as a policy priority since Obama took office. Currently, 45% say that dealing with the nation’s energy problems should be a top priority, down from 60% four years ago. 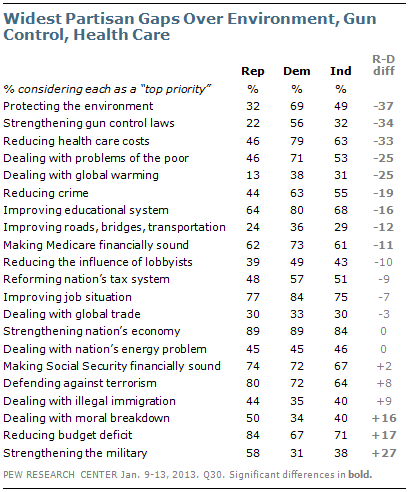 As in past Pew Research policy priority surveys, Republicans and Democrats offer differing views about the importance of many of the country’s most pressing issues.

Broad majorities of Republicans and Democrats see the economy and jobs as top priorities. And more than seven-in-ten Republicans (74%) and Democrats (72%) say making the Social Security system financially sound should be a top priority, though they may have different views about how to do so.

There is far less consensus on other issues, with some of the largest differences over the environment, gun control, and health care. Nearly seven-in-ten Democrats (69%) say protecting the environment should be a top priority compared with just 32% of Republicans. Democrats also are much more likely to emphasize strengthening gun controls laws (56%) and reducing health care costs (79%) than are Republicans (22% and 46%, respectively). 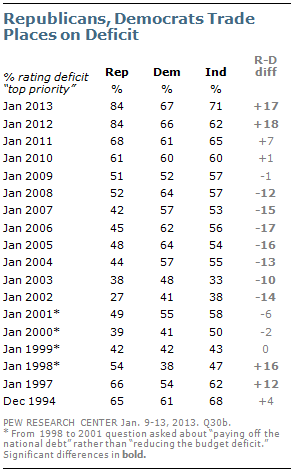 Democrats and independents also rate the deficit as a more important priority than they did in January 2009, though the increases have been smaller. Currently, 67% of Democrats view deficit reduction as a top priority, up from 52% four years ago; the increase among independents has been comparable (71% now, 57%).

For the last few years more Republicans than Democrats have rated reducing the deficit as a top policy priority, but this represents a reversal from the Bush administration, when Democrats typically viewed the deficit as a more important issue. At the start of George W. Bush’s second term in January 2005, for instance, 64% of Democrats and 48% of Republicans said that reducing the budget deficit should be a major priority for the president and Congress.

By contrast, during the Clinton administration, more Republicans viewed deficit reduction as a top policy objective. In January 1997, at the start of Bill Clinton’s second term, 66% of Republicans said reducing the deficit should be a top priority, compared with 54% of Democrats.

Gun Control a Lower Priority than in 2001 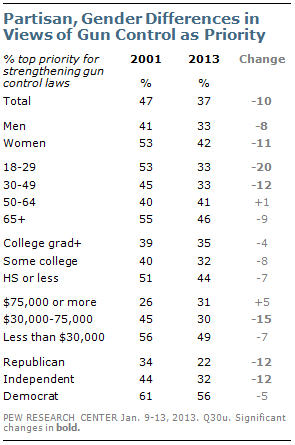 Women (42%) are somewhat more likely than men (33%) to call gun control a top priority. However, smaller percentages of both women and men view gun control as a top priority than did so at the start of George W. Bush’s first term. 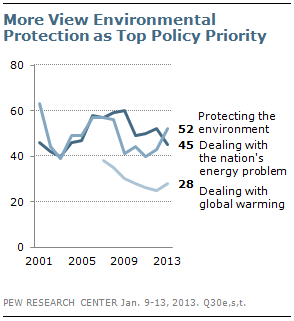 At the same time, the percentage saying that dealing with the nation’s energy problems should be a top priority has slipped from 52% to 45% since last year. For the first time in five years, energy now ranks slightly lower than the environment on the public’s list of priorities.

Dealing with global warming ranks at the bottom of the public’s priority list. Just 28% say it should be a top priority for the president and Congress, little changed from 2012. 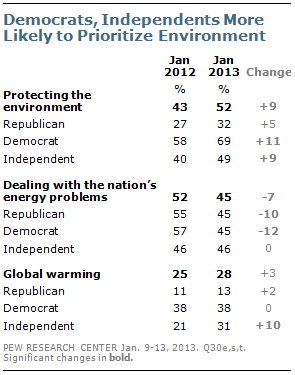 By contrast, there continues to be very little partisan difference on whether dealing with the nation’s energy problems should be a top priority; 45% of both Republicans and Democrats say this. 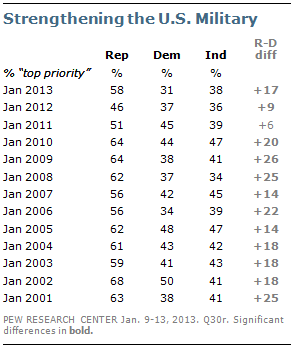 Over the past decade, Republicans have consistently been much more likely than Democrats to view strengthening the military as a top policy goal. In January 2009, 64% of Republicans and just 38% of Democrats said strengthening the military should be a top priority for the president and Congress. But those differences narrowed considerably in 2011 and 2012, before widening again this year. 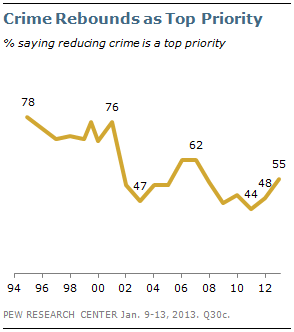 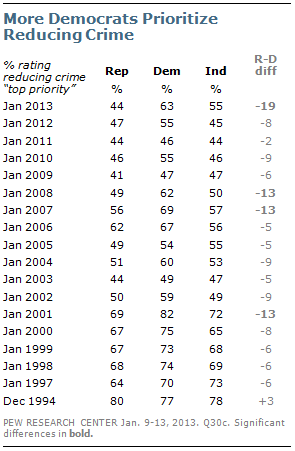 The rise in crime as a top priority has taken place among Democrats and independents, while Republican views are little changed. About six-in-ten Democrats (63%) say crime should be a top priority, up 17 points from 2011. More than half of independents (55%) give top priority to reducing crime, up 11 points over the last two years. By contrast, just 44% of Republicans give high priority to reducing crime, unchanged from January 2011. As a result of these shifts, the gap between Democrats and Republicans is now as large as it has ever been, at 19 points. 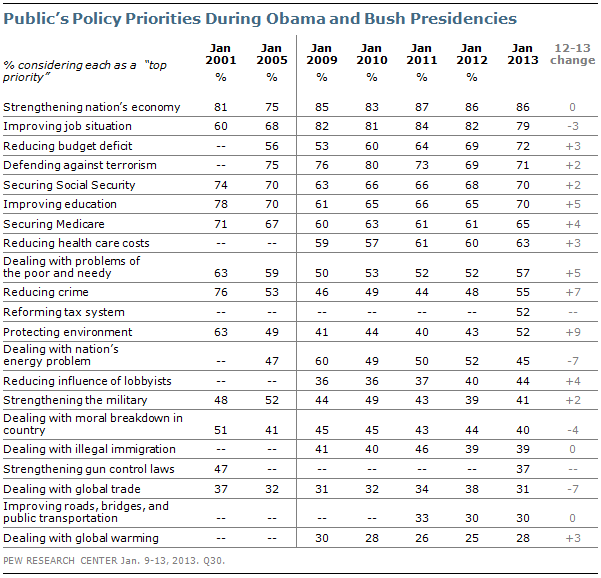