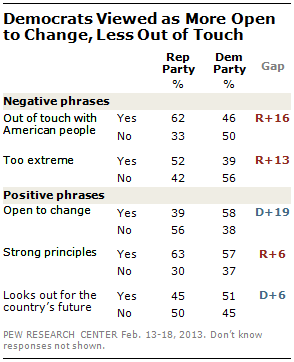 At a time when the Republican Party’s image is at a historic low, 62% of the public says the GOP is out of touch with the American people, 56% think it is not open to change and 52% say the party is too extreme.

The national survey by the Pew Research Center, conducted Feb. 13-18 among 1,504 adults, comes at a time when Republican leaders are debating the party’s future in the wake of Barack Obama’s reelection. The Republican Party’s image has been hit hard over the past decade. In January, just 33% said they viewed the party favorably, among the lowest marks of the last 20 years. The GOP’s favorable rating has not been above 50% since shortly after George W. Bush’s reelection in 2004.

An earlier release from the survey by the Pew Research Center and USA TODAY found that while both party’s congressional leaders receive negative job ratings, just 25% approve of the job performance of GOP leaders, compared with 37% approval for Democratic congressional leaders.

The new report finds that while the Democratic Party is viewed more positively on most traits tested, opinion is divided about whether the party is out of touch with the American people: 46% say it is, while 50% it is not. And only somewhat more say the Democratic Party is looking out for the country’s future than say that about the Republican Party (51% vs. 45%).

Republicans More Critical of Their Party 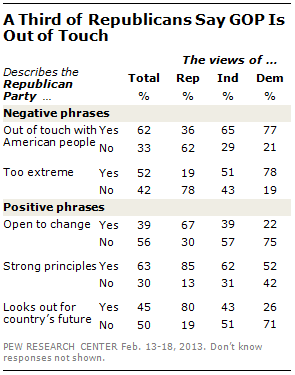 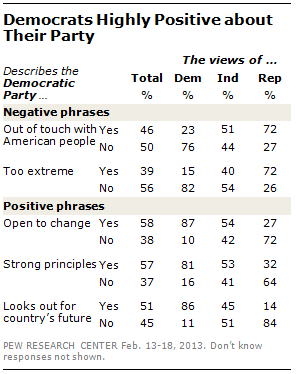 Far more independents say the Democratic Party is open to change than say that about the Republican Party (54% vs. 39%). The gap is roughly the same in independents’ views about whether the parties are out of touch (65% Republican vs. 51% Democratic) and too extreme (51% vs. 40%). 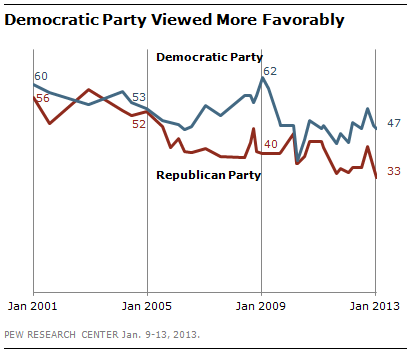 The Republican Party’s overall image stands at one of the lowest points in nearly two decades. And, while impressions of the Democratic Party are much stronger, they are far below where they were four years ago.

GOP Seen as Principled, But Out of Touch and Too Extreme
OverviewRepublicans More Critical of Their PartyOverall Views of Parties
About the Survey