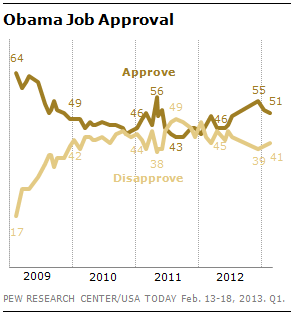 For three consecutive months, Barack Obama’s overall job approval rating has held above 50%. But he receives mixed ratings when it comes to specific issues such as his handling of Afghanistan and gun control and more disapprove than approve of his handling of the budget deficit and economy. Obama’s rating on the issue of immigration has improved markedly from 2011, particularly among Democrats, independents, and most notably among Hispanics.

Overall, 51% approve of the way Obama is handling his job as president, while 41% disapprove. Opinion is little changed from one month ago, but down slightly from a recent high of 55% approval in December, shortly after Obama’s reelection. 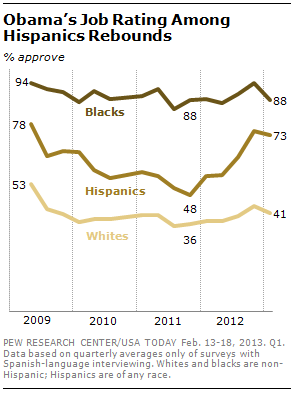 While Obama’s job ratings are up at least slightly among many demographic groups, one of the most striking turnarounds over the past year is in the views of Hispanics. In the last quarter of 2011 (approval data is merged on a quarterly basis to increase the sample size of Hispanics), just 48% of Hispanics nationwide approved, and 39% disapproved, of Obama’s job in office. This coincided with a period in which awareness and concern about the Obama administration’s record on deportations ran high among Hispanics, according to research by the Pew Hispanic Center. Since then, approval among Hispanics has risen steadily. By the end of 2012, Hispanic approval had risen to 75%, and has held at 73% so far in the first quarter of 2013. Among blacks, Obama’s approval rating has remained steady (currently 88% approve). Among whites, Obama’s job rating has improved slightly since 2011, from 36% to 41%.

Obama on the Issues 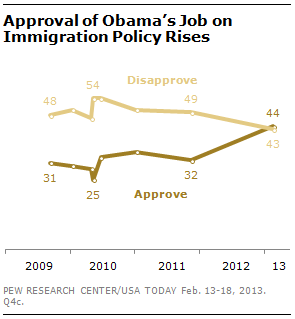 One of the sharpest improvements in Obama’s job ratings come on the issue of immigration. For the first time in his presidency as many approve as disapprove of the job he is doing on the issue, a change driven in large part by improved ratings from Hispanics.

Overall, 44% approve of how Obama is handling the nation’s immigration policy compared with 43% who disapprove. 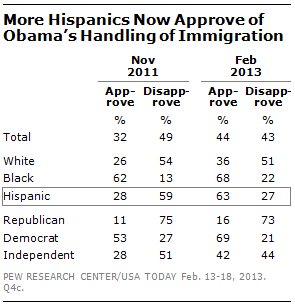 Approval is up 12 points from November 2011 and marks the first time in Obama’s presidency that disapproval has not outweighed approval.

There has been a complete turnaround in how Hispanics view Obama’s handling of immigration. Today, more approve than disapprove by a 63% to 27% margin. In November, 2011 that margin was reversed: 28% of Hispanics approved of the job Obama was doing on immigration policy while 59% disapproved. Democrats and independents also have become more likely to approve of Obama’s job handling immigration policy since 2011, while opinion among Republicans is little changed.

Yet even with this improvement on the issue of immigration, Obama’s job ratings on a wide range of specific issues are lower than the 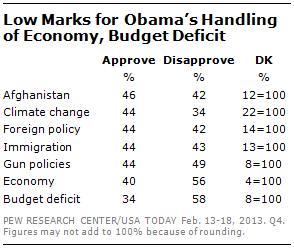 rating he receives for his overall performance. Out of the seven issues tested in the survey, there is no issue for which Obama receives an approval rating of 50% or better.

Views of Obama’s job handling the economy also are negative. Four-in-ten (40%) approve, while 56% disapprove. Obama has not received an approval rating of 50% or better for his handling of the economy since June 2009, when 52% approved. 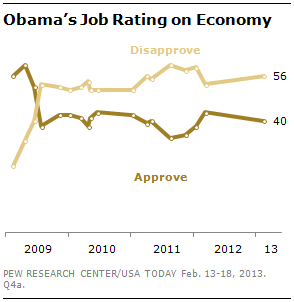 Following his decision to remove 34,000 troops from Afghanistan in the next year, 46% approve of how Obama is handling the situation in Afghanistan, while 42% disapprove. Opinion is little changed from last March, but Obama’s approval rating on Afghanistan has fallen from 56% in January 2012. 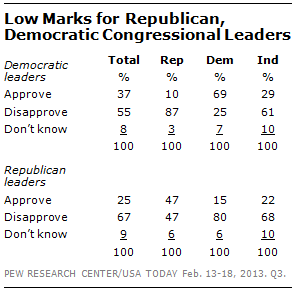 If No Deal is Struck, Four-in-Ten Say Let the Sequester Happen Section 1: Opinions About Major Issues
Section 2: Views of Obama, Congress
Obama on the IssuesViews of Congressional Leaders
About the Survey