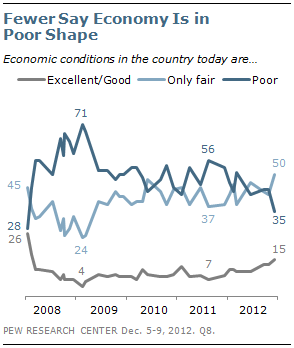 There has been a modest improvement in the public’s ratings of current economic conditions – while just 15% say the nation’s economy is in excellent or good shape, the percentage saying the economy is in poor shape has dipped to 35%, the lowest percentage since January 2008.

Yet the public’s future economic outlook has become more negative. A quarter (25%) says the economy will be worse off a year from now, up from just 8% in September and the highest level since June 2011. Overall, 37% expect the economy to be better off next year, down from 43% in September. 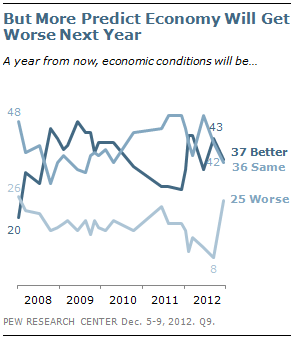 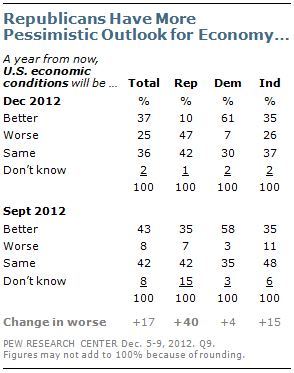 Republicans are increasingly pessimistic about the nation’s economy. Fully 47% of Republicans now say that the economy will be in worse shape a year from now, while only 10% expect conditions to improve.

In September, just 7% of Republicans expected the economy to be worse off over the next year, while 35% expected conditions to improve.

Independents also have a more negative economic outlook. Currently, 26% of independents say the economy will be worse in a year, up from 11% in September. 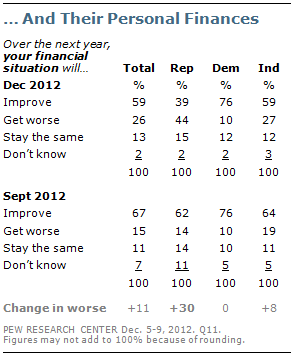 By contrast, economic expectations among Democrats have shown little change. About six-in-ten (61%) Democrats expect conditions to be better a year from now, on par with evaluations in September (58%).

Along with more negative forecasts for the national economy, Republicans have bleak expectations for their own personal financial situation. Currently, about as many Republicans expect their financial situation to get worse over the coming year (44%) as get better (39%). In September, Republicans were far more optimistic: 62% expected their personal finances to improve and just 14% said they would get worse over the next year. By comparison, the views of Democrats have changed very little.

Republicans’ increased economic pessimism appears to be tied to their skepticism that the president and congressional Republicans will reach an agreement before Jan. 1 to avoid going over the fiscal cliff and their disappointment over Obama’s reelection last month.

In a Pew Research Center/Washington Post survey conducted last week, 49% of the public said political leaders would not reach agreement on the fiscal cliff before the Jan. 1 deadline. Republicans were particularly dubious about the prospects for a deal; just 22% said a deal would be reached in time, while 69% said it would not. By comparison, Democrats were far more optimistic; 55% expected a deal, 36% did not. Republicans also were more likely than Democrats to see dire consequences if an agreement is not reached. Nearly three-quarters of Republicans (74%) said going over the fiscal cliff would have a negative effect on the U.S. economy, compared with 48% of Democrats. 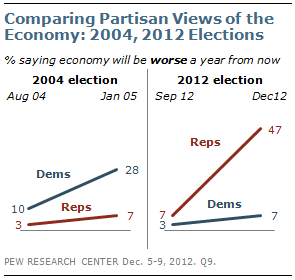 Mitt Romney’s loss to Obama last month is also undoubtedly a factor behind the spike in GOP pessimism. In September, just 7% of Republicans and 3% of Democrats expected economic conditions to get worse. However, following Obama’s reelection, the share of Republicans saying the economy will get worse has jumped to 47%, while remaining stable among Democrats.

Following George W. Bush’s reelection in 2004, the situation was reversed, with Democrats growing more pessimistic about the economy. But the postelection shift among Democrats then was far less dramatic than it is among Republicans today. In January 2005, 28% of Democrats said the economy would get worse over the next year, up from 10% a few months before the election. 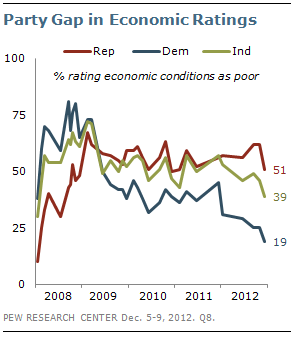 with partisanship. During the Bush administration, Republicans offered substantially higher economic ratings than did Democrats. Throughout the Obama administration, Democrats have consistently been more positive about the economy. 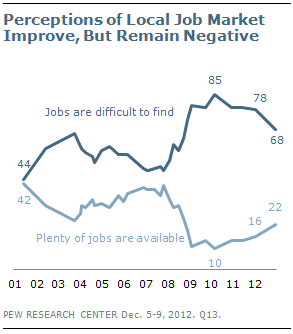 Americans continue to see a difficult job market in the communities where they live, but impressions have shifted in a more positive direction. In the current poll, the percentage saying jobs are difficult to find has slipped below 70% for the first time since the fall of 2008. About two-thirds (68%) now say that jobs are difficult to find in their area, down from 78% at the start of the year. The proportion saying there are plenty of jobs available has risen since January, from 16% to 22%.

Views of the local job situation are far less partisan than opinions about the national economy. About two-in-ten Republicans (19%) and 24% of Democrats believe that there are plenty of jobs available in their local communities. Nearly three-quarters of Republicans (73%) and 65% of Democrats say jobs are difficult to find. 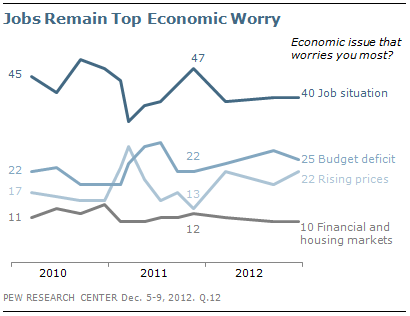 On the economy overall, four-in-ten (40%) say that the job situation is the economic issue that worries them most, while 25% say the budget deficit. These opinions are little changed since March, but mentions of jobs are down slightly from a year ago (47% in November 2011).

Currently, more Republicans say the federal budget deficit, rather than the job situation, is their top economic worry (44% vs. 29%). In November 2011, about the same percentage of Republicans cited jobs (39%) as the deficit (36%). Among Democrats, jobs clearly remain the top economic concern (47% today, 55% a year ago) and there has been virtually no increase in the percentage citing the federal budget deficit (15% now, 14% then.)

But the partisan gap has widened considerably: 61% of Republicans say recent economic news is mostly bad, up from 45% a month ago. Democrats’ views have changed very little over 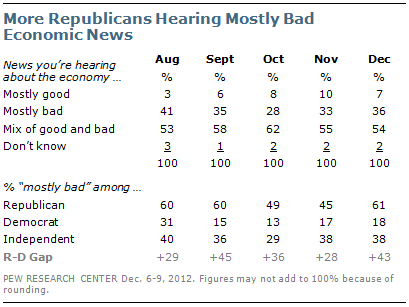 the past month (18% mostly bad news, 17% in November). Independents’ views of economic news are unchanged from November (38% mostly bad).

The current partisan divide of 43 points approaches the largest ever – 45 points in September. While there have long been partisan differences in views of the tone of economic news, the gap has grown wider during the presidential campaign.

The separate survey by the Pew Research Center for the People & the Press, conducted Dec. 6-9 among 1,001 adults, finds that perceptions of news about specific economic sectors, including the job situation, have changed little over the past month, with one notable exception. As gas prices have fallen, there has been a decline in the percentage saying 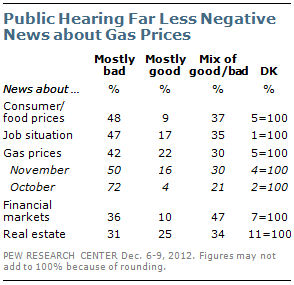 they are hearing mostly bad news about gas prices. 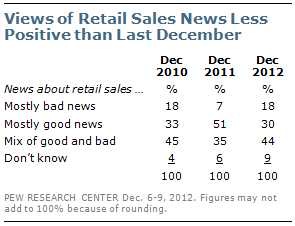 Nonetheless, perceptions of retail sales news are not as positive as they were last December, when 51% said they were hearing mostly good news. Current views of news about retail sales are similar to those in December 2010.

As Fiscal Cliff Nears, Democrats Have Public Opinion on Their Side Section 1: Views of Obama, Congress, the Parties Section 2: The Deficit, Taxes and Awareness of Fiscal Cliff
Section 3: Views of Economic Conditions
Partisanship and Economic ExpectationsJobs Less Difficult to Find, But Remain Top Economic WorryPerceptions of Economic News Grow More Partisan
About the Surveys