Proposals to require voters to show photo identification before being allowed to vote draw overwhelming support. By 77% to 20%, voters favor a requirement that those voting be required to show photo ID. Opinion about this is little changed from six years ago, when 80% of voters supported voter photo ID requirements. 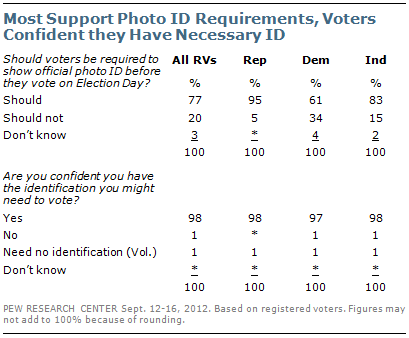 Several states have enacted strict photo ID voting requirements, but there have been court challenges to many of these laws. Last week, a Pennsylvania judge blocked enforcement of that state’s voter ID law.

In a national survey of 1,263 registered voters, conducted Sept. 12-16 by the Pew Research Center for the People & the Press, nearly all (98%) say they are confident that they have the identification they will need at the polls on Nov. 6.

Most Voters in States with Photo ID Laws Know about Requirements 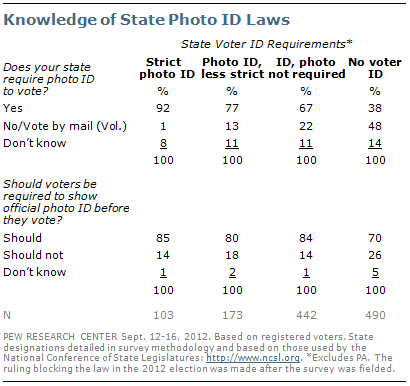 For more on opinions about voter identification requirements by race and ethnicity, see the Pew Hispanic Center’s report: “Latino Voters Support Obama by 3-1 Ratio, But Are Less Certain than Others about Voting,” Oct. 11, 2012.