There is no public consensus when it comes to how the presidential candidates are being covered by the news media. Nearly half (46%) say the coverage of Romney has been fair, while among those who see a bias as many say the press has been too easy on the GOP nominee (20%) as too tough on him (21%). The same percentage (46%) says coverage of Obama has also 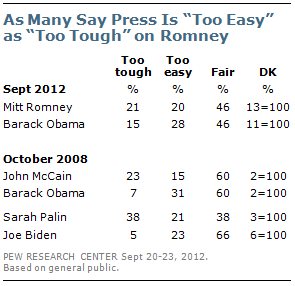 been fair. However, nearly twice as many say press coverage of the president has been too easy (28%) than too tough (15%). 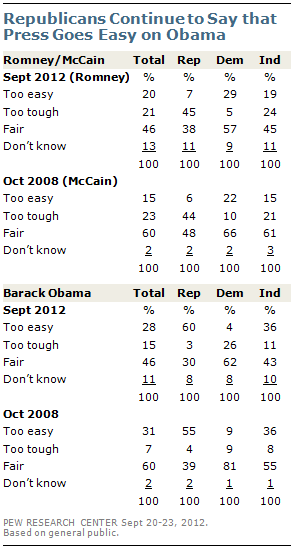 Republicans generally are more critical of the press than are Democrats. The new survey by the Pew Research Center for the People & the Press, conducted September 20 – 23, 2012 among 1005 adults, finds, 45% of Republicans think the press has been too tough on Mitt Romney – almost identical to the 44% who said this about coverage of McCain in October 2008. By comparison, 26% of Democrats think the press is too tough on Obama, though this has increased substantially from only 9% four years ago.

What stands out to Republicans even more is what they see as unfair treatment of Obama. Six-in-ten (60%) Republicans say the news coverage is too easy on Obama. Most Democrats say news organizations have been fair in their coverage of Mitt Romney, with only 29% saying they have been too easy on him.

Pluralities Say Press is Fair to Romney, Obama
Overview
About the Survey