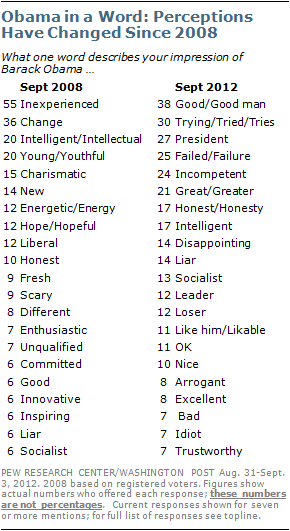 Four years ago, voters’ descriptions of Barack Obama focused on his newness on the political scene. In September 2008, more voters used the word inexperienced to describe Obama than any other word, while change was the most frequently used positive term. Words like young, charismatic and new were also among the top descriptions.

Today, the public’s one-word descriptions for Obama reflect the mixed views of his presidency. The top positive words are good and trying, while the most frequently used negative descriptions are failure and incompetent.

The latest national survey by the Pew Research Center for the People & the Press and the Washington Post, conducted Aug. 31-Sept. 3 among 1,008 adults, finds that some perceptions of Obama have endured over the years. Four years ago, intelligent was among the most frequent descriptions. It has remained a constant in one-word surveys on Obama since then. Currently, 17 of respondents describe Obama as intelligent; two months before the 2008 election, 20 people said Obama was intelligent.

The word socialist also has been consistently used to describe Obama. Among Republicans, socialist is the third most frequently used word (9 mentions), behind failure and incompetent (15 each). 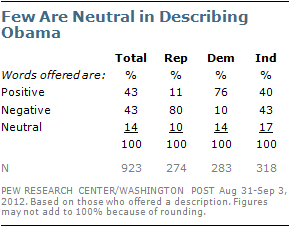 More generally, the one-word reactions to Obama reflect polarized views of his presidency. About four-in-ten (43%) of those who offered a one-word description used a positive term to describe their impression of Obama, while an identical percentage used a negative word. Just 14% gave a neutral word, with president the most common. 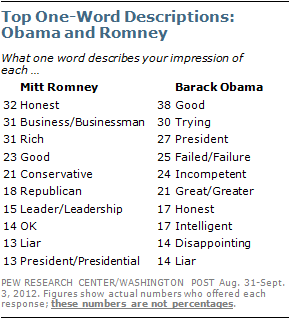 A Pew Research Center/Washington Post survey last week found that more people use negative than positive words to describe Mitt Romney: 42% of the words were clearly negative while 28% were positive. There were far more neutral descriptions of Romney than Obama (30% vs. 14%).

While impressions of Obama are centered on his performance as president, Romney’s focused on his background and experience. Business and businessman, and rich, were among the top words used to describe the GOP nominee.

The word honest is used to characterize both Romney and Obama, though it is a more frequent descriptor of Romney. Conversely, the word liar is used with about the same frequency in describing both men. 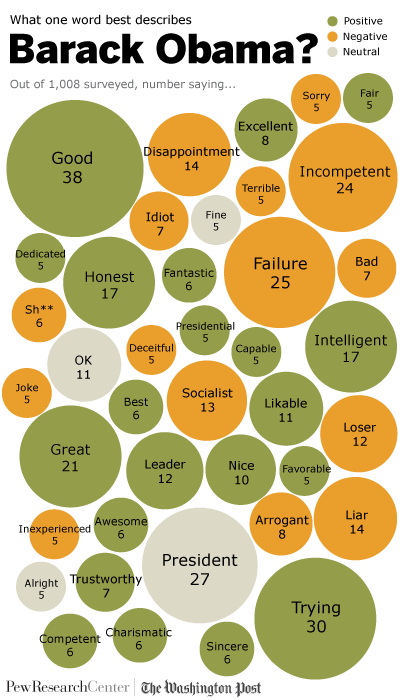