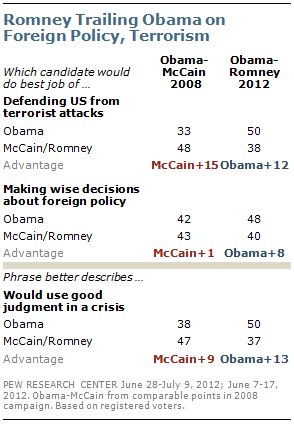 Mitt Romney’s trip to Europe and Israel this week highlights a potential weakness of his candidacy. The former Massachusetts governor trails Barack Obama by eight points among registered voters as the candidate best able to handle foreign policy and 12 points as best able to defend against terrorist attacks, according to the Pew Research Center’s most recent survey.

And on both issues, Romney is faring far worse against Obama than did John McCain, who made national security a centerpiece of his campaign.

From Romney’s perspective, it might not seem to be much of a problem running behind Obama on foreign policy. Opinion polls consistently find that foreign policy and national security are far overshadowed by the economy among the nation’s top problems. And it is not as if McCain’s strengths on these issues led him to victory four years ago. 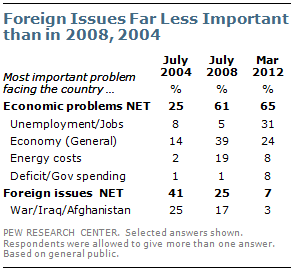 In Pew Research’s March survey, just 7% volunteered any foreign issue – including the war in Afghanistan– as the most important problem facing the nation. In 2004, 41% cited a foreign policy concern as the top national problem and in July 2008, as the economic crisis was deepening, 25% did so.

Yet all presidential challengers need to show that they can handle the duties of commander-in-chief. And in June, Romney trailed Obama by 13 points (50% to 37%) as the candidate better described by the phrase “would use good judgment in a crisis.” The question does not specifically ask about a foreign crisis, although many voters undoubtedly think of it in this context.

In July 2008, McCain led Obama by nine points as the candidate more likely to use good judgment in a crisis. But he subsequently lost that advantage in late September, amid a domestic crisis – the Wall Street financial meltdown.

In traveling abroad to burnish his foreign policy credentials for voters at home, Romney is taking a page from Obama’s playbook. Obama embarked on his own tour of Europe and the

Obama’s trip attracted big crowds and enormous press coverage. During his week-long tour, 51% of all election news coverage was devoted to his trip, making it one of the most heavily covered events in the 2008 campaign. And 62% of the public said they heard about Obama’s trip; at that point in the campaign, the only development that attracted more interest was when Obama captured the Democratic nomination in June.

However, the trip may have done more to raise Obama’s profile than to change opinions about him. Just 15% said they learned a lot about his approach to foreign policy from news coverage of the trip; another 33% said they learned something about his foreign policy views. And in early August, Obama held a slight lead over McCain (46% to 43%), as he had in July prior to his trip (47% to 42%).