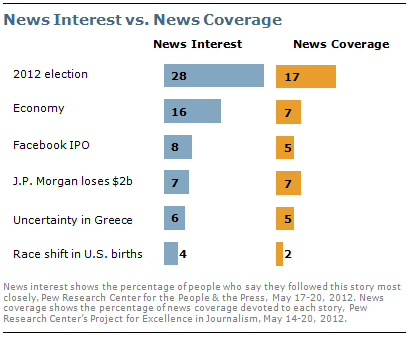 Americans focused most closely last week on news about the presidential election, as the race increasingly shifted from the Republican primary contest to the head-to-head fight between Barack Obama and Mitt Romney.

Nearly three-in-ten (28%) say the campaign was their top story, while 16% say they most closely followed news about the economy, according to the latest weekly News Interest Index survey, conducted May 17-20 among 1,004 adult by the Pew Research Center for the People & the Press.

Election news topped coverage as well, accounting for 17% of the newshole, according to a separate analysis by the Pew Research Center’s Project for Excellence in Journalism (PEJ). General news about the U.S. economy made up 7% of coverage, while related news specifically about the multi-billion dollar losses at banking giant J.P. Morgan Chase accounted for another 7%. In terms of news interest, 7% say they followed news about the troubles at J.P. Morgan most closely last week.

Assessing Coverage of the Candidates 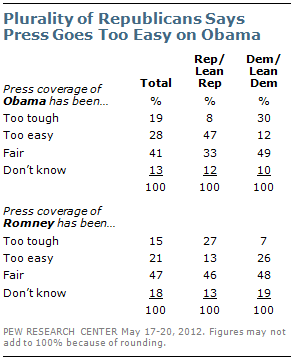 On balance, the public views news coverage of both Obama and Romney as fair. However, more think that coverage of Obama has been too easy than say that about coverage of Romney.

About one-in-ten (8%) say their top story of the week was Facebook’s initial public stock offering; 14% say they followed this news very closely. With the start of trading last Friday, news about the stock offering accounted for 5% of coverage. 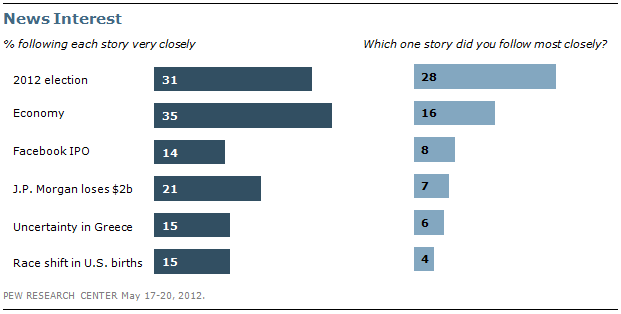 Overall, 15% say they very closely followed news about census data that show the number of minority births in the U.S. topped the number of white births last year; 4% say this was the news they followed most closely. News about this demographic shift accounted for 2% of coverage.

These findings are based on the most recent installment of the weekly News Interest Index, an ongoing project of the Pew Research Center for the People & the Press. The index, building on the Center’s longstanding research into public attentiveness to major news stories, examines news interest as it relates to the news media’s coverage. The weekly survey is conducted in conjunction with The Project for Excellence in Journalism’s News Coverage Index, which monitors the news reported by major newspaper, television, radio and online news outlets on an ongoing basis. In the most recent week, data relating to news coverage were collected May 14-20, and survey data measuring public interest in the top news stories of the week were collected May 17-20, 2012, from a nationally representative sample of 1,004 adults.