Public support for maintaining U.S. forces in Afghanistan has reached a new low. And as the general election campaign begins, swing voters, by nearly two-to-one, favor removing U.S. troops from Afghanistan as soon as possible. 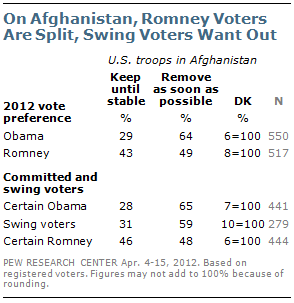 Nearly two-thirds (65%) of voters who say they are certain to support Barack Obama in the general election favor a rapid U.S. troop withdrawal. But support for a troop pullout is nearly as extensive (59%) among swing voters — those who are either undecided in their general election preferences, lean toward a candidate or say they may still change their minds. Swing voters make up nearly a quarter (23%) of all registered voters.

Voters who express certainty about voting for Mitt Romney in the fall are divided over what to do about U.S. troops in Afghanistan: 48% favor removing them as soon as possible, while 46% support maintaining U.S. forces there until the situation has stabilized.

The latest survey by the Pew Research Center for the People & the Press, conducted April 4-15, 2012 among 1,494 adults, including 1,164 registered voters, finds that public support for keeping troops in Afghanistan has reached a new low.

Just 32% of the public now says that the U.S. should keep troops in Afghanistan until the situation there has stabilized, while 60% favor removing the troops as soon as possible. In May 2011, the public was evenly divided over removing U.S. troops from Afghanistan (48% remove troops vs. 47% keep troops there). 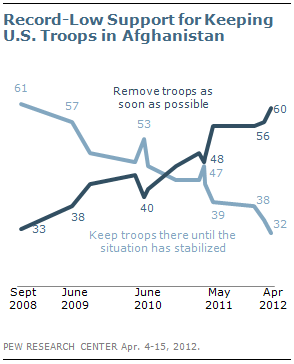 Support for keeping U.S. forces in Afghanistan has declined over the past year among Republicans, Democrats and independents. For the first time in a Pew Research Center survey, as many Republicans (48%) favor removing U.S. forces from Afghanistan as soon as possible as support keeping the troops there until the situation is stabilized (45%).

As recently as a month ago, a majority of Republicans (53%) said they favored staying in Afghanistan until the situation stabilized, while 41% favored a troop withdrawal.

Currently, 66% of Democrats and 62% of independents say the U.S. should 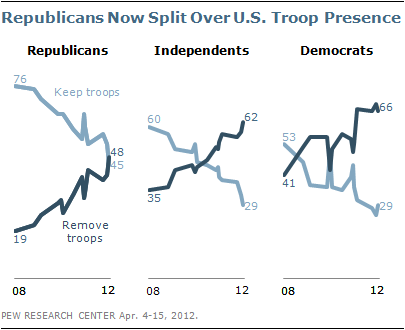 remove troops as soon as possible, while about three-in-ten (29%) in each group favors keeping forces in Afghanistan.

The proportion of independents who favor a troop pullout has increased 11 points since last May (from 51%) immediately after the killing of Osama bin Laden. Over this period, the percentage of Democrats favoring a troop withdrawal has increased 16 points (from 50% in May) 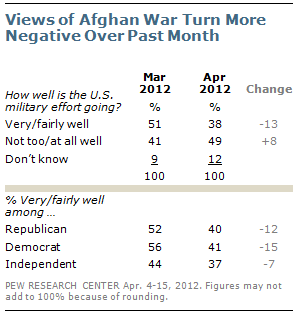 Growing support for a troop pullout comes as public assessments of the war effort have reached their lowest point since the fall of 2009. Currently, just 38% say the military effort is going very or fairly well, while almost half (49%) say that it is going not too or not at all well. Just a month ago, about half (51%) said that things were going very or fairly well there.