Following primary victories in Wisconsin, Maryland and the District of Columbia last Tuesday, Mitt Romney is clearly seen as the inevitable GOP nominee, and Republicans now see continued primaries as bad for the party. 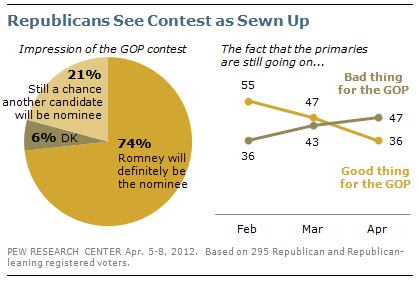 In the latest national survey by the Pew Research Center for the People and the Press, conducted April 5-8, 2012, roughly three-quarters (74%) of Republican and Republican-leaning voters say that Romney will definitely be the Republican Party’s nominee this fall. Only 21% believe a candidate other than Romney still has a chance to become the party’s nominee.

And Republicans’ appetite for the ongoing primary campaign has soured. By a 47% to 36% margin, more say it is a bad for the party, not good, that the nomination race has not yet been decided and is still going on. Just a month ago, Republicans were split on this question, and as recently as February a majority thought it was a good thing for the party that the nomination had not yet been finalized.

The sense of Romney’s inevitability is shared by Democrats as well: 64% of Democratic and Democratic-leaning voters also see Romney as the inevitable nominee. And 63% of Democrats believe that the long GOP primary is bad for the Republican Party.