The presidential campaign again proved to be the top story for the public and the media last week. Overall public interest is comparable to most previous primary election cycles, but well below the high mark set four years ago. 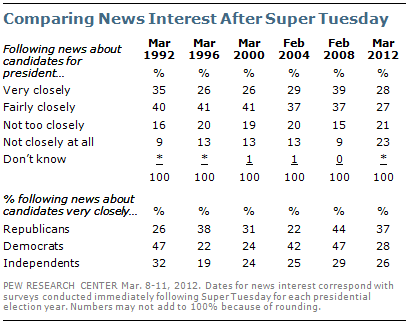 Last week, which included Super Tuesday contests in 10 states, 28% say they followed election news very closely, according to the latest weekly News Interest Index survey, conducted March 8-11 among 1,005 adults by the Pew Research Center for the People & the Press.

Similar to current results, in February 2004 about three-in-ten (29%) said they followed news about the presidential candidates very closely. In March 2000 and March 1996, about a quarter in each survey (26%) said they were following campaign news this closely shortly after Super Tuesday voting.

Still, interest and coverage were far below the week of Super Tuesday primaries in 2008, when 39% said they followed election news very closely. That year, both parties had contested races, including the high-profile fight between Barack Obama and Hillary Clinton for the Democratic nomination; 24 states voted on Feb. 5, 2008, that campaign’s Super Tuesday. 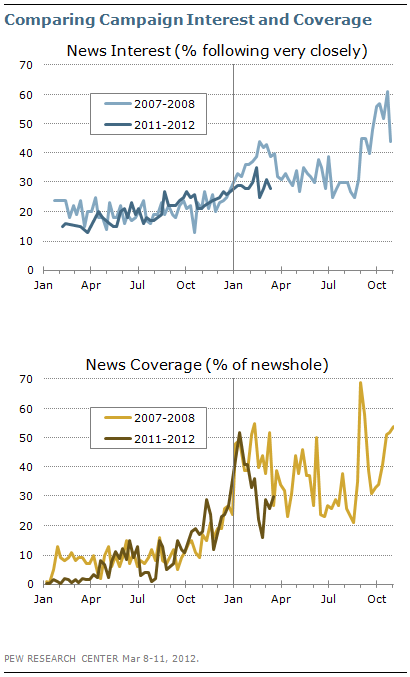 Coverage also was greater four years ago. Last week, election news accounted for 30% of coverage, according to the Pew Research Center’s Project for Excellence in Journalism (PEJ). The week of Super Tuesday in 2008, campaign coverage accounted for 55% of the newshole.

In early 2008, Democrats tracked election news following Super Tuesday much more closely than they did this year (47% very closely vs. 28% now). With only the GOP engaged in a primary fight this year, Republican interest stands about where it was four years ago (44% very closely in 2008 vs. 37% today). The same is true for independents (29% then, 26% now).

Understandably, the party without a primary contest generally follows a campaign less closely than the one that does at this point. In February 2004, when Democrats were choosing a candidate to challenge George W. Bush, Democrats (42%) were much more likely than Republicans (22%) or independents (25%) to say they were following campaign news very closely.

In March 1996, when Bill Clinton was running for reelection, the reverse was the case. At that point, Republicans (38%) were more likely to say they were following news about the candidates very closely than were Democrats (22%) or independents (19%).

Throughout much of 2011, interest in campaign coverage was comparable to interest in 2007. Interest rose steadily in early 2008 as the public and the media focused on the Clinton-Obama fight.

In the current campaign, 23% say they did not follow news about the candidates at all closely last week, a number higher than similar points in previous campaigns going back to 1992. That includes 22% of Democrats, 23% of independents and 15% of Republicans. 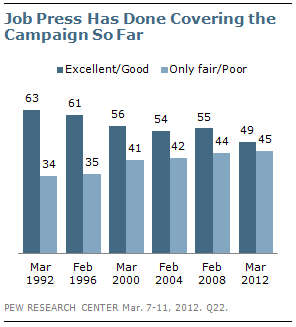 The public has become increasingly critical of news organizations’ campaign coverage over the past two decades. Currently, about half (49%) rate media coverage of the campaign as excellent or good while about as many (45%) rate it as only fair or poor.

Just as they did four years ago, Republicans offer the most negative assessments of campaign coverage: 55% rate the job being done by news organizations as only fair or 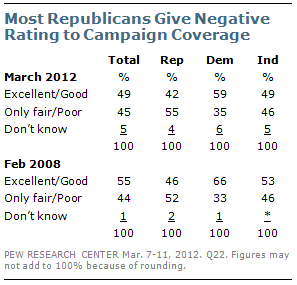 poor, while 42% say it has been excellent or good. About a third of Democrats (35%) give the coverage a negative rating; about six-in-ten (59%) are more positive. Independents are divided (49% say excellent or good; 46% say only fair or poor). 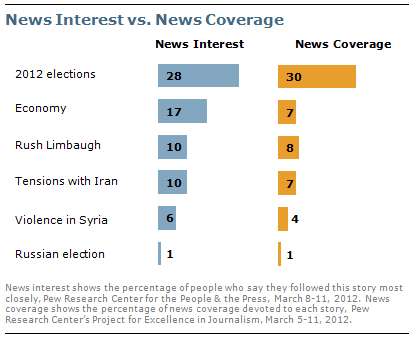 While the presidential campaign topped the public’s news interest and media coverage, Americans also continued to closely track news about the nation’s economy.

One-in-ten (10%) say their top story was the controversy over Rush Limbaugh’s crude comments about a woman who advocates requiring health care coverage for contraceptives, even for workers at certain religiously affiliated institutions. Twice as many women than men say this was their top story (14% vs. 7%), though men and women are about equally likely to say they followed this news very closely. Overall, 20% followed this story very closely.

Limbaugh’s comments and the controversy that followed came in the context of the ongoing debate over requirements for birth control coverage in the 2010 federal health care reform law. Though the overall health care debate accounted for 10% of coverage last week, most of that dealt with the fight over Limbaugh’s comments about Sandra Fluke, the Georgetown law student who had testified before a congressional panel. According to PEJ, the back and forth over Limbaugh – including President Obama’s comments – accounted for 8% of the week’s coverage.

About one-in-ten (8%) very closely followed reports about the Russian elections and protests about their validity; 1% says this was the news they followed most closely. News about the elections made up 1% of coverage. 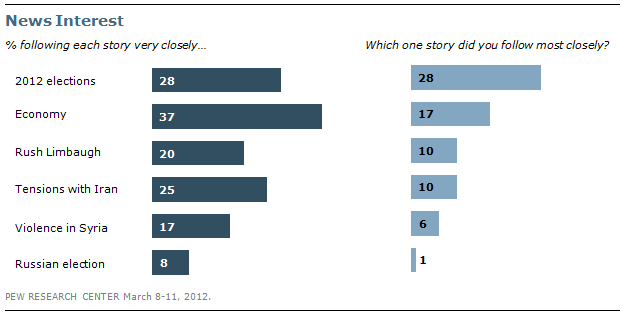 These findings are based on the most recent installment of the weekly News Interest Index, an ongoing project of the Pew Research Center for the People & the Press. The index, building on the Center’s longstanding research into public attentiveness to major news stories, examines news interest as it relates to the news media’s coverage. The weekly survey is conducted in conjunction with The Project for Excellence in Journalism’s News Coverage Index, which monitors the news reported by major newspaper, television, radio and online news outlets on an ongoing basis. In the most recent week, data relating to news coverage were collected March 5-11, and survey data measuring public interest in the top news stories of the week were collected March 8-11, 2012 from a nationally representative sample of 1,005 adults. This report also includes material from a March 7-11 survey among 1,503 adults.