Election news continued to be the public’s top story last week, just ahead of the March 6 Super Tuesday voting.

Just more than two-in-ten (22%) say they followed news about the candidates for president more closely than any other news. Somewhat fewer (17%) cite the tornadoes that hit parts of the Midwest, according to the latest weekly News Interest Index survey, conducted March 1-4 among 1,009 adults by the Pew Research Center for the People & the Press. 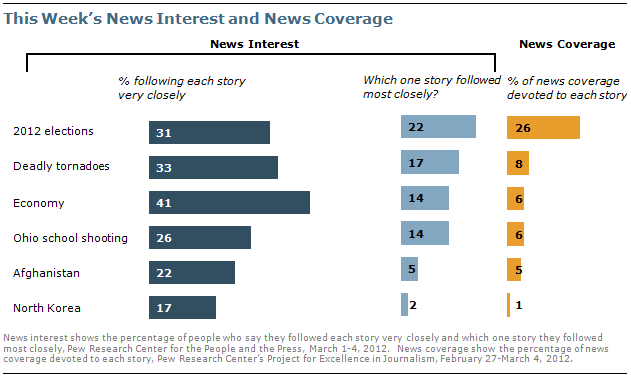 The buildup to Super Tuesday voting in 10 states also topped coverage, accounting for 26% of the newshole, according to a separate analysis by the Pew Research Center’s Project for Excellence in Journalism (PEJ). News about the tornadoes made up 8% of coverage.

Looking at another measure, interest in news about the presidential election has been relatively steady in recent weeks. About three-in-ten (31%) say they followed news about the presidential candidates very closely last week, about the same as the 28% that said this one week before that. Though only the Republicans have a primary fight, comparable percentages of Republicans (38%) and Democrats (32%) say they followed election news very closely. Among independents, 28% say this.

In 2008, both parties had primary fights and Super Tuesday took place earlier in the year, on Feb. 5. The week leading up to the voting, campaign news accounted for about half of all coverage (51%). Interest in this news was somewhat greater than today: 37% said they were following election news very closely. That included 41% of Republicans, 43% of Democrats and 28% of independents. At that point, 32% said the primary fight was their top story.

Just more than two-in-ten (22%) say they followed news about the situation in Afghanistan very closely in a week with continued attacks on American soldiers following protests over the burning of Korans at a NATO base; 5% say the situation in Afghanistan was their top story. More Republicans say they followed this news very closely (28%) than Democrats (20%) or independents (18%). News about Afghanistan accounted for 5% of coverage.

These findings are based on the most recent installment of the weekly News Interest Index, an ongoing project of the Pew Research Center for the People & the Press. The index, building on the Center’s longstanding research into public attentiveness to major news stories, examines news interest as it relates to the news media’s coverage. The weekly survey is conducted in conjunction with The Project for Excellence in Journalism’s News Coverage Index, which monitors the news reported by major newspaper, television, radio and online news outlets on an ongoing basis. In the most recent week, data relating to news coverage were collected Feb. 27-March 4, and survey data measuring public interest in the top news stories of the week were collected March 1-4, 2012 from a nationally representative sample of 1,009 adults.