About six-in-ten Americans (62%) have heard about the proposed federal rule that would require employers, including most religiously affiliated institutions, to cover birth control as part of their health care benefits. Among those aware of the issue, opinion is closely divided over whether these institutions should be given an exemption to the rule if they object to the use of contraceptives: 48% support an exemption and 44% say they should be required to cover contraceptives like other employers. 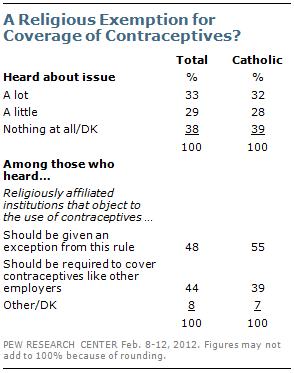 The latest national survey by the Pew Research Center for the People & the Press and the Pew Forum on Religion & Public Life, conducted Feb. 8-12 among 1,501 adults, finds sharp divisions on the issue by religious affiliation, party and ideology.

The Obama administration announced Feb. 10 that it would modify the mandate in response to criticism that the rule would force religious organizations to violate their religious beliefs in providing contraception coverage. The survey shows little difference in opinions among people interviewed before the administration’s proposed modification on Feb. 10 and those interviewed afterwards.

There also are wide partisan and ideological divisions in opinions about the issue. Nearly three-quarters (73%) of Republicans, and 82% of Republican and Republican-leaning independents who agree with the Tea Party, favor giving religious institutions that object to contraceptives an exemption from the new federal rule. By about two-to-one (64% to 29%), Democrats say religious institutions should be required to cover contraceptives like other employers; liberal Democrats (72%) are more likely than conservative and moderate Democrats (58%) to favor this approach. 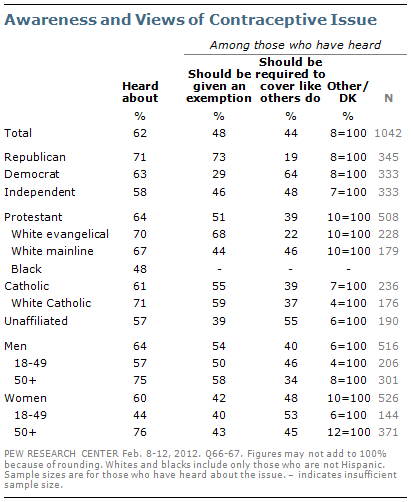 A narrow majority of men (54%) who have heard at least a little about this issue say religious institutions that object to the use of contraceptives should be given an exemption from the new federal rule. Only about four-in-ten women (42%) agree.

Awareness of the controversy is also far higher among older adults than among the young. Six-in-ten (60%) adults ages 18-29 have heard nothing about the issue, compared with just 24% among those 50 and older. Among people ages 30-49, 43% have not heard about it.

The contraception story was a particular focus of talk show hosts on cable and radio. According to the Pew Research Center’s Project for Excellence in Journalism, fully 24% of the time studied on talk shows on both radio and cable news channels during the past week was devoted to the contraception controversy. That contrasts with 8% of news coverage overall. 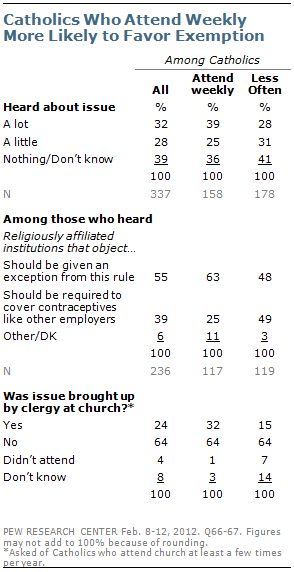 The issue of requiring contraceptive coverage is of particular relevance to Catholics, since many of the institutions that initially raised religious objections to the rule are affiliated with the Catholic Church. Along with white Protestants, white Catholics are more likely than members of other religious groups to say that they have heard at least a little about the issue. Among white Catholics, 71% say they have heard about the rule, as have 70% of white evangelical Protestants and 67% of white mainline Protestants.

While 55% of Catholics who have heard about the rule support an exemption to it, opinion varies considerably by frequency of church attendance. Among Catholics who attend Mass at least once a week, 63% support an exemption while 25% say religiously affiliated institutions should have to cover contraceptives like other employers. Among those who attend less often, opinion is evenly divided (48% favor an exemption, 49% oppose one).

About one-quarter of Catholic churchgoers (24%) report having heard about the issue in church. Among Catholics who report attending Mass weekly, 32% said the rule was brought up recently by their priest or other church official. 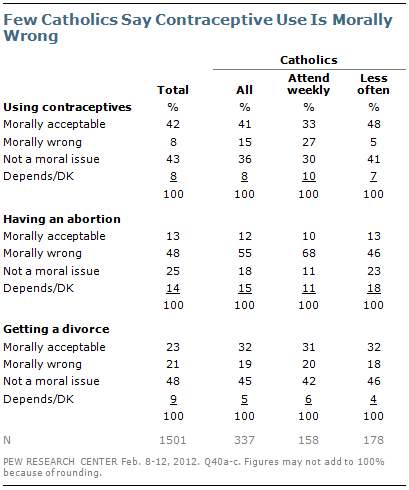 Another practice forbidden by church doctrine – getting a divorce – is regarded as morally wrong by only 19% of Catholics. 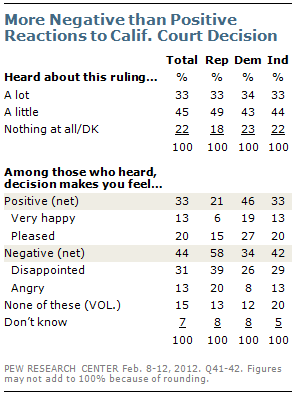 Among religious groups, white evangelical Protestants have the most negative reactions to the verdict, while the views of white mainline Protestants and Catholics are more mixed. About six-in-ten white evangelical Protestants (59%) say they are either angry (25%) or disappointed (35%), compared with fewer than half of Catholics (42%) or white mainline Protestants (43%). Roughly a third in each of the latter groups is very happy or pleased with the ruling. Among those unaffiliated with a religion, 45% say they are very happy (20%) or pleased (25%) with the ruling, while 30% are disappointed (20%) or angry (10%).