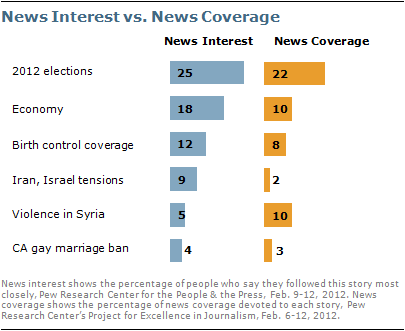 Rick Santorum’s recent electoral wins may have propelled him to the top of the Republican field, but by a better than two-to-one margin, Mitt Romney remains the candidate Americans say they are hearing about most in the news. Half (50%) say they have heard the most about Romney recently, compared with 19% who say they have heard the most about Santorum. (For more on the GOP race, see “Santorum Catches Romney in GOP Race” Feb. 13, 2012.)

With the race for the GOP nomination in flux, news about the 2012 elections again topped the public’s news interest last week, according to the latest weekly News Interest Index survey, conducted Feb. 9-12 among 1,000 adults by the Pew Research Center for the People & the Press. A quarter (25%) say this was the news they followed most closely, while 18% say economic news was their top story. 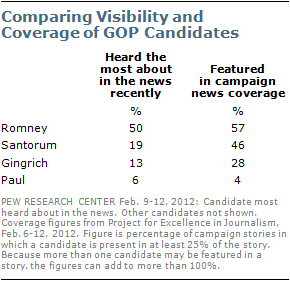 The campaign also received the most coverage, accounting for 22% of the newshole, according to a separate analysis by the Pew Research Center’s Project for Excellence in Journalism (PEJ). Though many more Americans say they have been hearing the most about Romney, he and Santorum were both major players in campaign coverage: Romney was a significant figure in 57% of campaign stories and Santorum in 46%.

Candidate visibility among Republicans and GOP-leaning independents is comparable to the general public: 52% say they heard the most about Romney, 24% say Santorum, 10% Gingrich and 6% Paul. 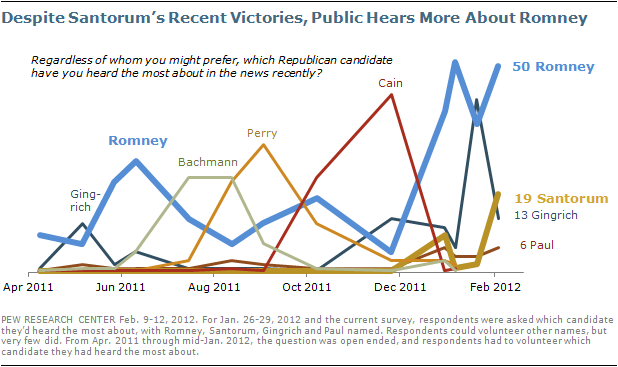 Reflecting the volatile GOP primary campaign, candidate visibility has fluctuated dramatically over the past year as a series of alternatives to Romney have become the focus of media and public attention for a period of time before falling back again. Just two weeks ago, 42% said they were hearing the most about Gingrich. Nearly as many (36%) said Romney was the most visible GOP candidate then; just 2% named Santorum.

Economic news also continued to attract strong interest; 42% say they followed news about the condition of the U.S. economy very closely, while 18% say this was the news they followed most closely. News about the economy made up 10% of coverage.

About a quarter (26%) say they very closely followed news about tension between Israel and Iran over Iran’s nuclear program. This was the week’s top story for 9%, but accounted for only 2% of coverage. 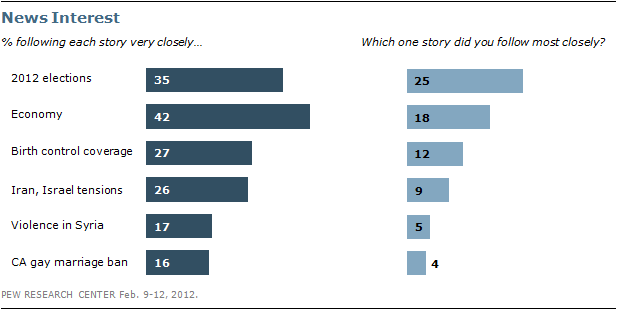 Similar numbers followed coverage of the debate over a new federal rule that would require religious employers, such as Catholic hospitals and universities, to include birth control in their health insurance plans; 27% say they followed this news very closely and 12% say this was the news they followed most closely. The debate, including a change announced Friday by President Obama intended to address the concerns of religious groups, accounted for 8% of coverage.

Among partisans, 38% of Republicans say they followed this news very closely, compared with 27% of Democrats and 22% of independents. One week earlier, Democrats were slightly more attentive than Republicans to news about the fight over funding for breast cancer prevention programs at Planned Parenthood by the Susan G. Komen for the Cure foundation.

Women were more likely than men to say they very closely followed news about the Komen funding for Planned Parenthood (24% vs. 16%). There is no comparable divide in interest in the debate over birth control coverage (26% of women and 27% of men followed this news very closely).

A court ruling that found California’s ban on gay marriage unconstitutional received less attention from the public; 16% say they followed this news very closely, while 4% say this was their top story of the week. The federal appeals court ruling made up 3% of coverage.

These findings are based on the most recent installment of the weekly News Interest Index, an ongoing project of the Pew Research Center for the People & the Press. The index, building on the Center’s longstanding research into public attentiveness to major news stories, examines news interest as it relates to the news media’s coverage. The weekly survey is conducted in conjunction with The Project for Excellence in Journalism’s News Coverage Index, which monitors the news reported by major newspaper, television, radio and online news outlets on an ongoing basis. In the most recent week, data relating to news coverage were collected Feb. 6-12, and survey data measuring public interest in the top news stories of the week were collected Feb. 9-12 from a nationally representative sample of 1,000 adults.