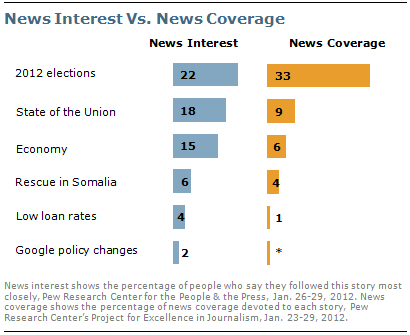 In the days before Tuesday’s hard-fought Florida primary and just after the president’s State of the Union address, political stories topped the public’s news interest.

About two-in-ten (22%) say they followed news about candidates for the 2012 presidential elections more closely than any other news last week. About as many (18%) say their top story was Barack Obama’s annual speech to a joint session of Congress on Jan. 24. Another 15% say they followed news about the nation’s economy most closely, according to the latest weekly News Interest Index survey, conducted Jan. 26-29 among 1,006 adults by the Pew Research Center for the People & the Press.

By comparison, news coverage was not so evenly distributed. The 2012 campaign dominated coverage, accounting for a third of the newshole (33%), according to a separate analysis by the Pew Research Center’s Project for Excellence in Journalism (PEJ). The State of the Union made up 9% of coverage and the economy 6%. 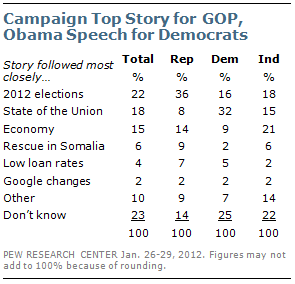 More than a third of Republicans (36%) say they followed news about the presidential candidates more closely than any other news last week. Reports about the condition of the U.S. economy ranked second (14% most closely). Just 8% of Republicans say President Obama’s State of the Union was their top story.

Among Democrats, about a third (32%) say they paid more attention to the State of the Union speech than to any other story. Another 16% say they followed election news most closely and 9% cite economic news. Independents are more evenly divided: 21% say their top story was news about the economy, while 18% cite the presidential election and 15% choose Obama’s speech.

Looking at a separate measure, nearly half of Democrats (48%) say they followed news about the State of the Union very closely, much more than the 17% of Republicans and 25% of independents that say this. Republicans and Democrats are about equally likely to say they very closely followed news about the election (35% and 31%, respectively) or the economy (36% and 39%, respectively). 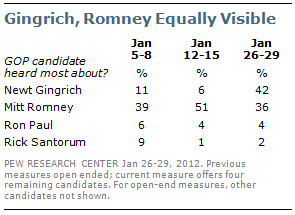 The week’s other top stories attracted less attention. Fewer than one-in-ten (6%) say their top story was the successful mission by U.S. special forces to rescue two aid workers – one American and one Dane – held captive in Somalia. About two-in-ten (21%) say they followed this news very closely. News about the raid made up 4% of coverage.

Just 2% say their top story was new policies announced by Google about how the internet giant would track people’s web use; 7% say they followed this news very closely. The story made up less than 1% of the week’s newshole. 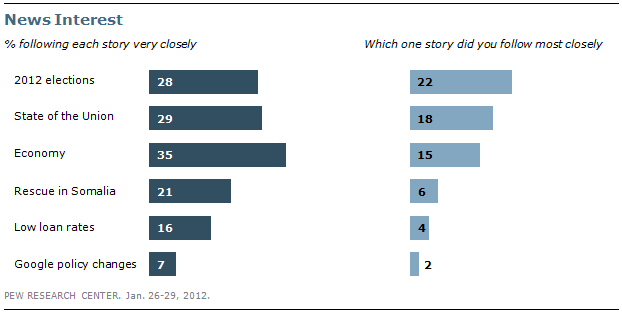 Two weeks ago, the on-line protests by prominent web-sites against proposed legislation in Congress targeting online piracy proved to be the top story for those ages 18-29. In the most recent survey, young people were somewhat more likely to follow news about the Google policy changes than those over 50, but just 6% say this was the news they followed most closely. That’s well behind interest in Obama’s speech (21% most closely) or the presidential campaign (19%) among younger Americans.

These findings are based on the most recent installment of the weekly News Interest Index, an ongoing project of the Pew Research Center for the People & the Press. The index, building on the Center’s longstanding research into public attentiveness to major news stories, examines news interest as it relates to the news media’s coverage. The weekly survey is conducted in conjunction with The Project for Excellence in Journalism’s News Coverage Index, which monitors the news reported by major newspaper, television, radio and online news outlets on an ongoing basis. In the most recent week, data relating to news coverage were collected Jan. 23-29, and survey data measuring public interest in the top news stories of the week were collected Jan. 26-29 from a nationally representative sample of 1,006 adults.