The threat of nuclear disaster in Japan and the killing of Osama bin Laden by Navy SEALs were two of the breaking news stories that captured the greatest amount of public attention in 2011. But Americans also kept a steady watch on the economy at home. More than half said they followed news about rising fuel prices very closely in April, while the struggling economy remained a top story throughout the year. 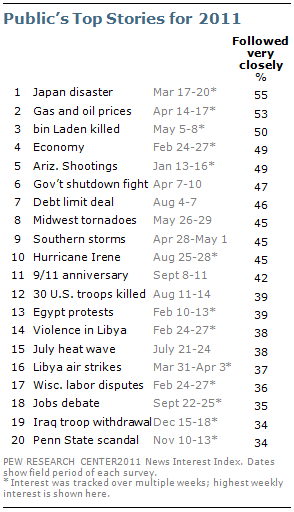 In the week after the March 11 earthquake and tsunami in Japan, 55% said they were following news about the disaster very closely, the highest for any news story over the course of the year. News about the situation in Japan proved to be the most closely followed news story for six consecutive weeks, as the extent of damage to a nuclear power complex became a more grave concern.

But 2011 was a year of many big stories. In early May, half (50%) of Americans very closely followed news about Osama bin Laden’s death. And on the domestic front, 53% said they tracked news about rising gas and oil prices very closely in mid-April. The January shooting of Congresswoman Gabrielle Giffords and others in Tucson, Arizona was closely tracked by 49%.

Since the meltdown of 2008, the economy has routinely been among the public’s top stories. And across most of the 2011 weekly News Interest Index surveys, about four-in-ten said they followed news about the economy very closely. About half (49%) said this in late February, a high point for 2011.

In 2011, economic news at times merged with the political as Democrats and Republicans battled in Washington over how to boost the economy and rein in the national debt and deficit.

Though many inside-Washington stories attract only modest public interest, two confrontations that threatened to have real consequences proved to be top stories this year. Nearly half (47%) said they very closely followed news about a federal budget showdown in April that nearly led to a government shutdown. Then in August, 46% very closely followed the fight over raising the government debt ceiling as a critical deadline approached.

A separate analysis by the Pew Research Center’s Project for Excellence in Journalism (PEJ) shows that news about the economy made up a greater share of coverage this year than any other major story. Economic news accounted for 20% of the newshole in 2011. The various story lines involving the Arab Spring accounted for 12% and the presidential campaign ranked third at 9% of coverage. (For more, see: “The Year in the News,” Dec. 21, 2011). 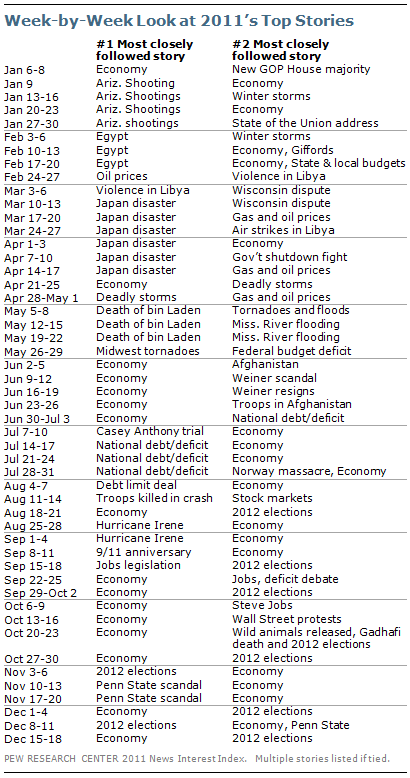 Starting shortly after New Year’s Day, 2011 proved a year of major breaking stories – both foreign and domestic – that captured the public’s attention for weeks at a time.

A Jan. 8 shooting rampage in Tucson, Ariz., left six dead and 13 injured, including Giffords. For the next three weeks, Americans said they followed developments in this story more closely than any other news. In the first full week after the shootings, 49% said this was the news they followed most closely. News about the shootings accounted for 57% of coverage that week, according to PEJ.

In early February, the public and media focus shifted to the massive protests in Egypt that led to the ouster of long-time president Hosni Mubarak. The public followed events in Egypt more closely than any other top story for three weeks. This news topped coverage for much of that period as well.

Then, the devastation caused by the earthquake and tsunami that hit Japan topped news interest for six weeks. The week of March 14-20, the first full week after the disasters hit, 57% said they were following news about developments in Japan most closely; news about Japan accounted for 57% of coverage. Asked which element of the story they were following most closely, 51% cited the damaged nuclear plants. Fewer cited the extent of destruction and relief efforts (23%) or the economic impact (11%).

Then, at the start of May, U.S. forces killed Osama bin Laden in a raid on his hideout in Pakistan. His death and related developments topped the public’s news interest for three weeks. The week of the raid, the bin Laden story accounted for 69% of coverage examined by PEJ, the biggest one-week story since monitoring began in early 2007. 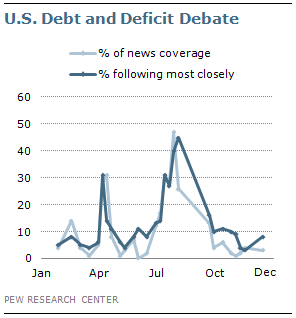 In early June, the public started to focus more intently on news about the nation’s struggling economy. With the recovery seemingly stalled and worries about a new recession, the economy – or a related news theme – proved to be a top or second ranked story for most weeks through the rest of the year. For much of July into early August, the public’s top story was the debate in Washington over what to do about the national debt and then the debt limit deal reached at the start of August.

The public paid far less attention to the work of the legislative “super-committee” authorized by that deal. As the panel’s deadline approached in mid-November, just 3% said this was the news they followed most closely. With no immediate consequences for failing to 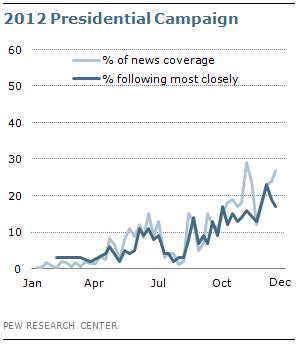 reach an agreement – and with failure expected – coverage also was limited (4%).

While the public initially paid only modest attention to the early stages of the fight for the Republican presidential nomination, by fall interest in the campaign began to grow. Heading toward the first contests of 2012, coverage increased 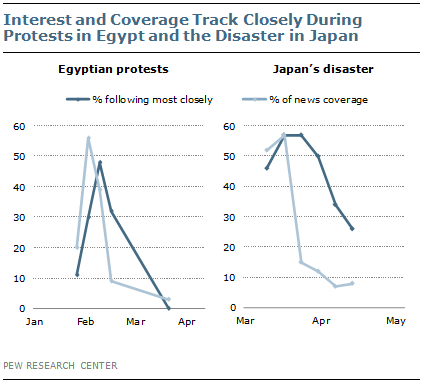 as well. Late in the year, the child sex abuse scandal at Penn State University became a top story. Meanwhile, the debt crisis playing out in Europe generated only modest attention.

While the Arab Spring developments in Egypt generated strong public interest early in the year, the Oct. 20 death of Moammar Gadhafi in Libya attracted much less attention. That week, 13% said the death of the former Libyan leader was the news they followed most closely. Public interest was divided among five top stories, none followed most closely by more than 15%. Gadhafi’s death, which came after rebels had taken control of the Libyan government, accounted for 17% of coverage that week. 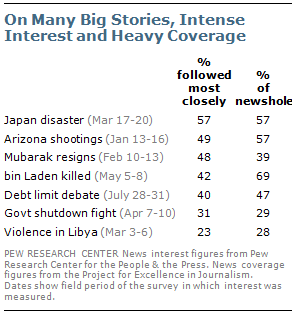 As the major stories of 2011 unfolded, the public and the media were often in sync on the top stories of any given week. That was the case immediately after the Japan disaster and the Arizona shootings, as well as the week that Hosni Mubarak resigned in Egypt.

But over the course of the year, there were instances where the public stayed with a story longer than the media, largely because the media shifted to other breaking stories.

For example, the week of March 21-27, nearly six-in-ten (57%) continued to follow the disaster in Japan more closely than any other story, but the media devoted more coverage to the start of 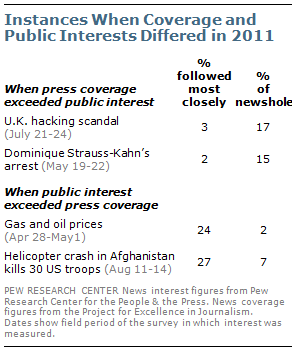 the American and NATO air campaign in Libya. That week, events in Libya accounted for 41% of coverage, while coverage of the aftermath of Japan’s disaster dropped to 15% from 57% one week earlier.

Similarly, the public continued to closely track news about the shootings in Arizona into late January, though the media shifted focus toward the end of the month. The week of Jan. 24-30, nearly four-in-ten (38%) said the aftermath of the shootings was their top story, more than double any of the other choices. This news, though, accounted for just 4% of coverage. The media devoted far more attention to the growing unrest in Egypt and elsewhere in the Middle East (20%) and Barack Obama’s state-of-the-union address (17%).

There also were stories over the year that received significant media coverage but drew little public interest. For example, in mid-May, the public paid modest attention to the arrest of Dominique Strauss-Kahn, then managing director of the International Monetary Fund, on sexual assault charges in New York. While this was one of the top stories of the week for the media (15% of coverage), just 2% said this was the news they followed most closely.

Similarly, in mid-July, media coverage of developments in the scandal involving phone hacking by newspapers in the United Kingdom greatly exceeded public interest. That week, the debate about the national deficit and debt in the U.S. topped both the public’s news interest and media coverage. Fully 29% of coverage analyzed by PEJ dealt with the debt and deficit. Still, the scandal involving News Corp media properties in Great Britain accounted for 17% of coverage. Just 3% of the public said this was the news they followed most closely.

And there were several instances in which public interest greatly exceeded coverage. The public generally closely tracks news about rising fuel prices. That was the case in late April, when 24% said this was their top story. News about rising oil and gas prices, however, was limited, accounting for 2% of coverage that week. In mid-August, more than a quarter (27%) said their top story of the week was the helicopter crash in Afghanistan that killed 30 U.S. troops. The news accounted for 7% of coverage in a week when the economy and the campaign topped coverage.

In the survey conducted Dec. 15-18, three stories topped the public’s news interest. Nearly two-in-ten (18%) say they followed news about the economic situation most closely, while 17% each say their top story was either the candidates for president in 2012 or the child sex abuse scandal at Penn State. 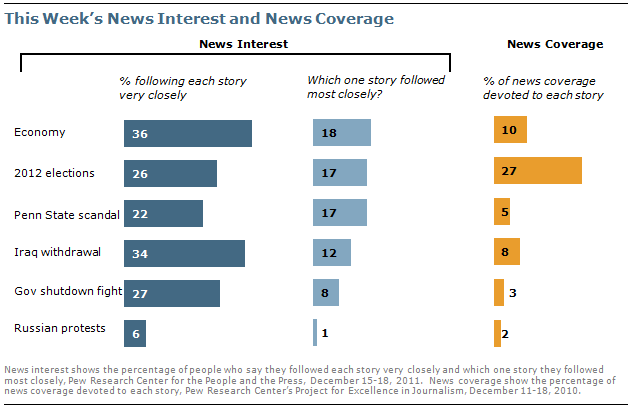 These findings are based on the most recent installment of the weekly News Interest Index, an ongoing project of the Pew Research Center for the People & the Press. The index, building on the Center’s longstanding research into public attentiveness to major news stories, examines news interest as it relates to the news media’s coverage. The weekly survey is conducted in conjunction with The Project for Excellence in Journalism’s News Coverage Index, which monitors the news reported by major newspaper, television, radio and online news outlets on an ongoing basis. In the most recent week, data relating to news coverage were collected Dec. 12-18, and survey data measuring public interest in the top news stories of the week were collected Dec. 15-18 from a nationally representative sample of 1,004 adults.