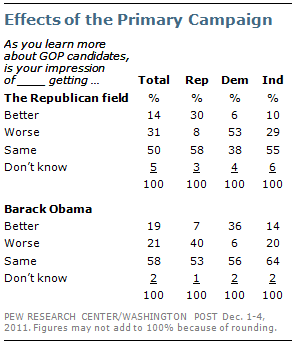 As the fight for the 2012 Republican presidential nomination unfolds, more Americans say their impression of the GOP field is worsening than improving. Those views, however, have not resulted in a better view of President Barack Obama at this point.

By a margin of two-to-one, more say that their impression of the GOP field is getting worse (31%) than getting better (14%). Half (50%) say their impression remains the same as they learn more about the Republican candidates.

The negative margin in evaluations of the GOP field rises to three-to-one (29% worse vs. 10% better) among independents, according to the latest national survey by the Pew Research Center for the People & the Press and The Washington Post, conducted Dec. 1-4 among 1,008 adults. Still, more than half (55%) say their impression is unchanged.

Only Republicans are more likely to say their impression of the field is improving (30%) rather than getting worse (8%). Nearly six-in-ten (58%) say their take hasn’t changed. Last month, about half of Republicans and Republican-leaning independents (48%) said they saw the field as excellent or good; about as many (46%) said they saw the candidates as a group as only fair or poor. (See “Obama Job Approval Improves, GOP Contest Remains Fluid.”)

Among independents, 14% say the GOP campaign has improved their impression of Obama while 20% say it has made them more critical of the president. Nearly two-thirds (64%) say their opinion remains the same.