Public support for increased federal funding on research into alternative energy technology, including solar technology, has decreased substantially since the early months of the Obama administration, with nearly all the decline coming from Republicans and Republican-leaning independents.

Overall, 68% of the public favors increasing federal funding for research on wind, solar and hydrogen energy technology while 26% are opposed. From 2006 through early 2009, roughly 80% supported increased federal funding for alternative energy research. 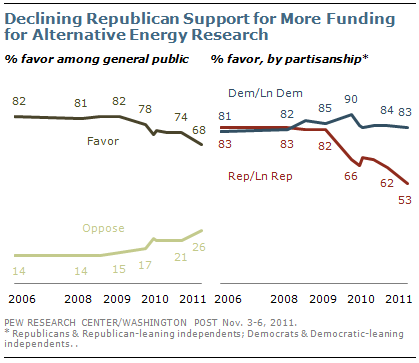 The latest national survey by the Pew Research Center for the People & the Press and The Washington Post, conducted Nov. 3-6 among 1,005 adults, finds that a narrow majority of the public (52%) thinks that government investment is necessary to develop new energy technology. About four-in-ten (39%) say that businesses will produce needed energy technology without government support. 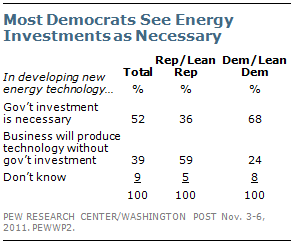 On this measure there also is a large partisan divide. Two-thirds (68%) of Democrats and Democratic leaners say government investment in new energy is necessary. Most Republicans and GOP leaners (59%) say businesses will produce technology without government investment.

Views of Other Energy Policies 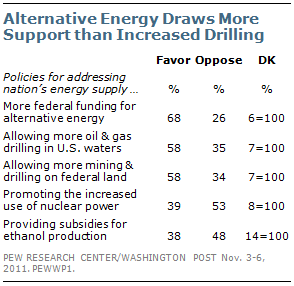 Support for government funding for alternative energy research has fallen since 2009, but this policy continues to draw more support 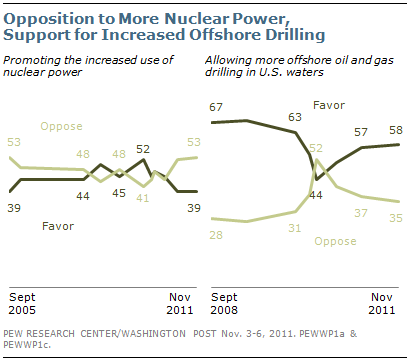 Only about four-in-ten (38%) favor government subsidies for ethanol production as a policy for addressing the U.S. energy supply. Nearly half (48%) oppose ethanol subsidies. 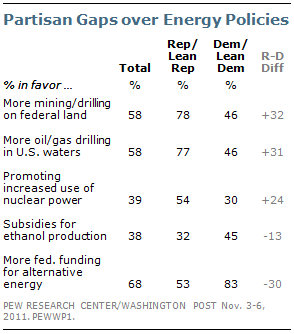 this policy. The partisan gap is as wide in views of allowing more offshore oil and gas drilling (31 points). In addition, more Republicans (54%) than Democrats (30%) favor promoting the increased use of nuclear power.

In contrast to the gap over alternative energy, the partisan differences over more offshore drilling and increased use of nuclear power date back several years. In April 2009, 86% of Republicans and GOP leaners favored increased offshore oil and gas drilling, compared with 57% of Democrats and Democratic leaners. In addition, 59% of Republicans favored greater use of nuclear power compared with just 38% of Democrats.