Nearly six-in-ten Americans (58%) say they plan to watch President Obama’s speech Thursday night to a joint session of Congress about his plans to spur job growth and help the struggling national economy. 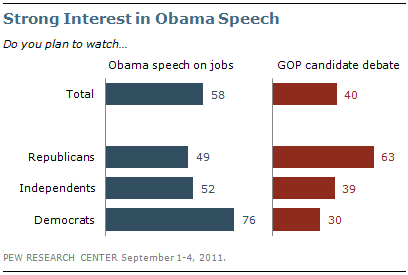 Not surprisingly, fewer plan to watch Wednesday night’s debate in California among the candidates for the 2012 Republican presidential nomination. Four-in-ten (40%) say they plan to watch the debate, while 57% say they do not plan to watch. Obama originally sought time for the speech the same night as the GOP debate, but then moved it to Thursday.

Those with a college degree (65%) are more likely than those with some college experience (53%) or those with a high school diploma or less (56%) to say they plan to watch Obama’s jobs speech this week. On the other hand, there are no significant differences based on household income.

Next:  About the Survey
← Prev Page
You are reading page1Page2
Next Page →

Most Plan to Watch Obama Jobs Speech
Overview
About the Survey